The need to meet ever tighter environmental legislation has been the driving force behind the development of three new application machines for the potato industry, according to Horstine Farmery, a division of Chafer Machinery. Andy Collings reports 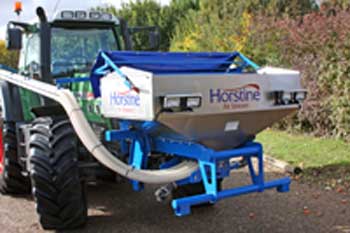 Designed to place a band of granular fertiliser to the side and below planted potato tubers, the Air Stream applicator employs a front mounted stainless steel hopper available in capacities of 1000, 1500 and 2000 litres.

Rather than using gravity to place fertiliser directly into one side of the ridge – a method that disturbs the ridge and causes the tractor wheel to run on soil that has to be re-ridged by the planter – fertiliser is blown to the rear of the tractor where it is delivered into the soil as the tuber is planted.

The fertiliser is metered by a hydraulically driven rotating positive displacement unit encased in a single, replaceable cartridge. Changes in forward speed, monitored by GPS, speed up or slow down the metering system to maintain the set application rate.

The Air Stream has six outlets – each of them individually metered and costs £9900. 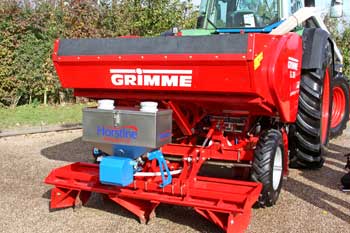 A key product used in the control of potato cyst nematode (PCN) and free living nematodes is Vydate and the product choice becomes more limited by the year.

Horstine’s Microband Air in-furrow Vydate applicator now benefits from a 70-litre hopper – the earlier land wheel driven mechanical version used a 35 litre hopper – and use of an electric metering unit and fan to feed and convey the chemical into the furrow during the potato planting operation.

It is an arrangement which not only places the ingredient where it is required but also allows the hopper to be fitted anywhere on the planter – usually at the back where it can be filled easily and safely.

Application rate is now controlled electronically from the cab using GPS speed monitoring and calibration is claimed to be quick and easy through use of a calibration tray that slides into the bottom of the metering unit. Prices start from £8750. 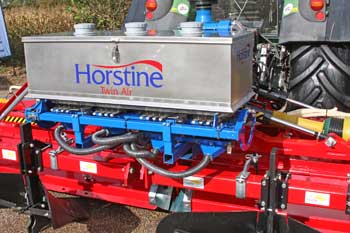 Bed tilling and nematicide application becomes a more efficient single operation with the development of the Twin Air system, says Horstine. Chemical is held in a 300 litre stainless steel hopper complete with hinged cover and, to help ensure even application, there is a 16 outlet metering unit – no distribution heads are used on these machines and outlets can be blanked off when not required.

As with the Microband Air and Air Stream, the in-cab controller unit provides electronic rate control, auto calibration and use of a GPS speed sensor. Low level hopper sensors are also fitted to all three units and automatic chemical shut off when they are lifted out of work is an option.

Horstine also points out that the Twin Air system, when fitted to a suitable cultivator, can also be used to sow oilseed rape, apply slug pellets or even a herbicide such as Avadex. Prices are yet to be announced.