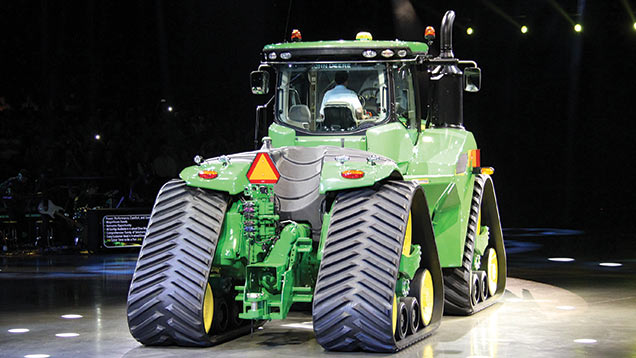 Farmers hankering after a green alternative to the four-track crawler tractors from Case-IH and Versatile will soon have their prayers answered.

Deere’s long-awaited 9RX is due to be launched at this November’s Agritechnica event in Hanover and with power in the region of 700hp, it will give its rivals something to think about.

Details are still sketchy, but it will be closely related to its 9R wheeled cousin.

That means bigger models are likely to have a 15-litre Cummins engine teamed to an 18-speed powershift transmission.

Track units will have two idlers – unlike the Quadtrac’s three – and will be wrapped in Camoplast rubber.

Eagle-eyed tractor spotters might be able to catch a glimpse of early test machines in the UK later this year, but it’s likely to be autumn 2016 before they start passing through dealers’ forecourts.