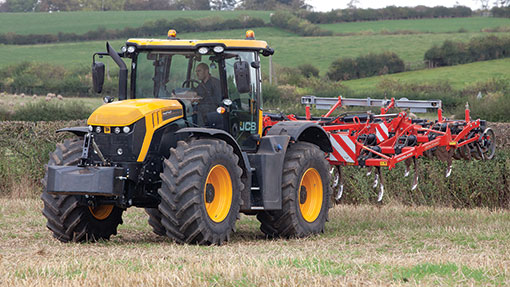 JCB’s all-new Fastrac is finally here. It’s good, but is it good enough to grab sales from other marques? Nick Fone finds out.

With its deeply furrowed brow and waspish colour-scheme, the Fastrac 4000 has the appearance of an angry character from a Pixar animated feature film. But below the skin things have really moved on with a new Sisu engine, Fendt transmission and advanced suspension system. It’s difficult to fault.

Almost a year ago, amid much dry ice and disco lighting, JCB unveiled its new 4000-series Fastrac at the Agritechnica show in Germany.

While the glitz and glamour was typical of a big tractor launch, the importance of this new machine for the British firm should not be underestimated.

Compared to the likes of Deere, Massey and New Holland, the number of Fastracs built each year is small. So for the Staffordshire company any new model is a big deal.

The Fastrac was hugely ahead of the game when it first appeared in the early 1990s, but the overall design of the smallest machines has only altered minimally in the past 20 years. In truth, it has become quite dated.

And, because the numbers produced are so small, the money invested in developing a new tractor really has to be recouped. This is make-or-break territory: JCB can’t keep piling money into the Fastrac concept unless it sells in bigger numbers. The new Fastrac has a heavy weight on its shoulders – it has to appeal to a wider audience than ever before.

So will the 4000-series cut the mustard? We tried a pre-production range-topping 4220 to find out whether it has got what it takes to mix it with the competition in the field and still maintain its high-speed haulage credentials.

Power now comes from a 6.6-litre Acgo/Sisu engine that delivers more power and torque than the Cummins it replaces. This will be tuned to pump out 160hp in the smaller models and 220hp in the big ’uns.

✔ Clearly labelled controls all grouped on one pillar

Torque has also shot up to 1,000Nm. Emissions are dealt with using the usual Agco/Sisu SCR system that makes it clean enough to satisfy Tier 4 final limits.

It’s all change in the transmission department, too. Gone is the old semi-powershift and in its place sits a two-range Fendt CVT box. This has a top speed of 60kph and is operated using JCB’s armrest-mounted joystick.

There is very little left over from the old 1000- and 2000-series Fastracs in the new model’s DNA. In fact, says JCB, only the air-brake setup and paint colour remain unchanged.

For a start, the chassis has been altered to allow tighter-turning front and rear axles as well as a loader. And while hydro-pneumatic self-levelling rams were employed on the back on previous models, they now feature on the front beam, too, doing away with the old coil spring and damper setup.

In standard format this is a single-acting arrangement but the big change has come with an optional computer-controlled, double-acting system.

According to JCB, this has had a huge effect on the Fastrac’s abilities in the field as a cultivations tractor. By being able to exert downforce on the axle, the rams help keep the wheels in contact with the ground at all times, regardless of lumps, bumps and shock-loads.

And in the field, with a hefty 4m-mounted Gregoire Besson tined cultivator, theory seems to play out in practice. An 850kg weight on the nose was just enough to keep things on an even keel on headlands – with it dropped into work there was virtually no scrabbling whatsoever.

While that might be the biggest improvement in JCB’s opinion, we thought the 4000’s ability to travel at speed across rough ground was its most astonishing feature.

Running across heavily tramlined stubbles with both a heavy mounted cultivator and Arcusin bale chaser at speeds up to 60kph, the tractor felt stable and smooth. On the road there’s little noticeable difference – ride comfort on the blacktop has always been the Fastrac’s area of strength.

The suspension is also likely to score highly with those farmers and contractors who use 2000-series Fastracs as carriers for de-mount sprayers. Retaining the rear load-deck means they can hunker down low when hitching or unhitching the spray-pack.

The 4000 turns tighter than its predecessor, too, with the front wheels pivoting to 40deg and the rears to 20deg. As on the company’s Loadalls, there’s a chunky rotary knob that switches between two-wheel steer, four-wheel steer and a third mode.

With this selected it is now possible to choose between delayed rear-axle activation, true-tracking and crab steer through the in-cab computer. It is also possible to activate 4WS automatically when the rear linkage is lifted.

A mammoth improvement on its predecessor, the new cab gets a forward-raked windscreen and feels more like the cockpit of a forager or combine. The floor area is still very similar to the old cab, it just feels much bigger inside.

Views from the large, swivelling armchair are good and, surprisingly, better than that from the cabs of many conventional tractors. 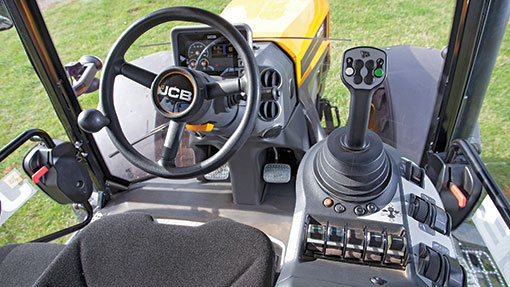 The dash hosts an analogue rev counter, temperature and fuel gauges alongside a high-definition display for the tractor functions that need changing once in a blue moon.

The rest of the settings are done through the same colour touchscreen used on JCB’s 3000- and 8000-series tractors. That’s been around for 10 years and is beginning to feel dated.

The main homepage is simple enough, showing speed, linkage and transmission status. Across the bottom are icons for different gearbox modes – “D” for full auto, “M” for manual and “PS” providing a phoney “stepped” powershift mode for the US market.

In “D”, the foot throttle acts as controller for both engine and transmission, automatically sorting everything out for itself. In “M”, left and right moves of the joystick increase and decrease transmission ratios, while foot and hand throttles set the revs. It is much the same story in “PS” mode, with seamless acceleration replaced by stepped ratio changes.

Holding an “H/L” button on the armrest toggles between high and low ranges. In low, five further icons appear on the screen. What looks like a combination of watermelons, rabbits, roundabouts and snails are not particularly intuitive so you are going to need to get the manual out if you want to meddle too much. 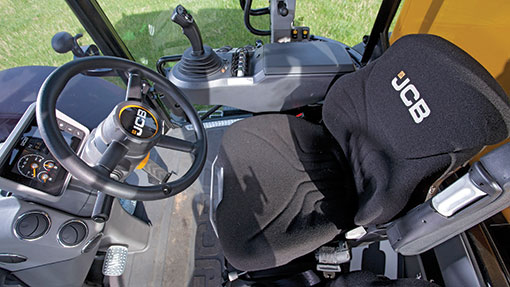 One alters joystick sensitivity while the second puts the gearbox into pedal mode, allowing the operator to set engine revs and alter forward speed with a gentle dose of right boot – designed for pto-powered implements such as balers and mowers.

Another pair of on-screen icons activate two cruise speeds, which allow the computer to decide the best way to reach the target speed according to engine load. These are critical and it’s just a shame that it is not clear exactly what they do. A few pop-up labels would make it much clearer. 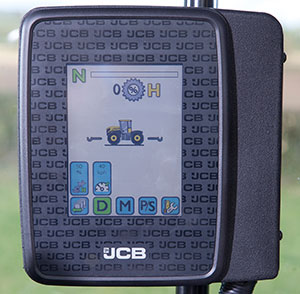 Finally, there’s a “Rev-Hold” mode, which will fuel up the engine automatically as the tractor reaches a tough patch to try to maintain a set rpm.

At Farmers Weekly, we always try to come up with some balanced views, but in this two-day test we could only come up with a handful of obvious downsides to the new tractor.

There is no question the 4220 Fastrac is a huge step up from the old 2000-series tractors. Very little remains the same, but from an operator’s perspective the biggest changes come with the curvy new cabin and stepless gearbox.

The new Fastrac certainly has the right credentials to make it popular with operators. The big question is whether potential purchasers will be prepared to stick their neck on the line and shell out for an all-new, relatively unproven machine.