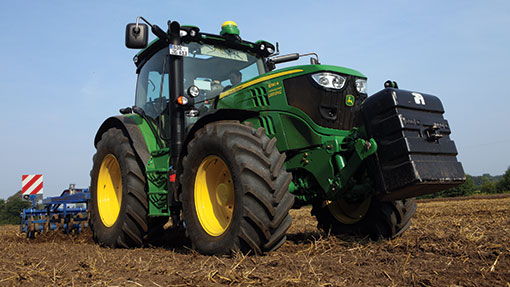 John Deere’s rangy four-cylinder was blissfully simple to use and its sizable cabin made it one of the best for driver comfort. But the keep-it-simple approach meant it lacked a lot of the fancy features found on some of the other test tractors. Base price: £83,673

John Deere’s cavernous cabin was the biggest on test by some margin. The four-pillar design made for a light and airy work space, although the large, flappy door wasn’t to every tester’s liking.

Build quality was also good with comforatble seats for both the driver and passenger. John Deere’s pivoting steering wheel and dash also meant there was plenty of space to get in and out.

All round visibility was pretty good, but the forward cab position meant the rear hitch wasn’t the easiest to see. The huge bonnet is the same size as the ones fitted on the six-cylinder tractors so it felt clumsier than a typical four-pot from the seat.

Unlike the other test tractors, all controls were positoioned on the right-hand console rather than armrest. The layout is well thought out, though, with all the main controls close to hand and blissfully easy to fathom.

Almost all the electronic functions are housed in the small Command Centre monitor on the right side of the console. This is straightforward and easy to use, but the fixed side position means it’s not very handy to use on the move.

Image quality is very crisp, though, and it was the most intuative screen to use. Drivers can navigate their way around using the touch screen function or by using the scroll wheel and tick and cross buttons. There’s also a bank of quick-access keys that get you straight to the page you need.

There is an option to adjust suspension height in the terminal, but the test team didn’t notice that much of a difference with the ride quality.

The 6130R is fitted with Deere’s own 4.5-litre, four-cylinder engine. This uses exhaust gas recirculation and a diesel particulate filter to keep emissions at bay without the need for AdBlue.

Unlike the Claas, which uses a similar engine, the Deere has a boost function that takes power up to a maximum of 137hp at the pto. Without boost, max power was 126hp in the DLG tests, making it the lowest powered tractor on test.

Specific fuel consumption at max power was at the upper end of the test group, though, with a reading of 249g/kWh. This also went up slightly to 250g/kWh when the engine was in boost.

In the six-point test it was also poorer than the test average. Without boost consumption was 280g/kWh, but it dropped to 270g/kWh with boost.

DLG estimates fuel use when regenerating the diesel particulate filter is 0.1 – 0.2% of the total, so it doesn’t have any significant effect on the overall result.

Engine speed control is pretty basic on the 6130R. There aren’t any programmable engine rev buttons, but there is an option to set max engine revs in the terminal.

Max engine revs can also be put into a headland management seqence, so it’s possible to have one max rev setting for work and one for the headland.

The Deere’s AutoQuad Plus box was the only manual on test and will be familiar to anyone who’s driven a 6000-series from the past 20 years or so.

The six ranges are selected using the yankable gear shifter and operators either use the cluch pedal or gearstick-mounted declutch button to slot them in smoothly.

Powershift steps can be notched through manually or automatically by pressing a button on the side of the gearlever. Once turned on auto mode adjusts powershift steps according to the load on the engine. Shifting point can be adjusted in the terminal by moving a slider between economy (shifting at lower revs) and power (letting the engine reach higher revs before shifting).

Transmission lock is located on the main gearlever, making it simple to park up safely. Deere has decided it doesn’t even need a proper hand brake – it just has a hold brake that won’t stay on.

Forward and reverse gears are selected using a lever on the left of the steering column. This one one of the best in this test and had a clear neutral position.

The transmission scored well in efficiency tests. In the draft test the Deere put down 114hp, meaning just 12hp was lost between the engine and the wheels. Specific fuel consumption in the draft test was 275g/kWh, about 2% better than the group average of 280 g/kWh (including AdBlue).

There are three simple buttons for controlling the four-wheel drive system – one for off, one for auto and one for fully on.

In auto mode the tractor will switch into 2wd at about 23kph and 4wd will kick back in when it drops to 21kph.

Diff lock is the usual Deere foot button affair that has to be clicked in manually and turned off by stamping on the brake.

There is an option to switch it on and off in a headland management sequence, but it doesn’t have any clever automatic functions.

Despite the tractor’s six-cylinder frame its 11.6m turning circle was bang on the group average.

The 6190R’s rear end hydraulics scored pretty well, but a lack of options at the front dragged its average down a touch.

The chucky rear links managed 6.3t in the lifting test, putting the Deere half a tonne below the test group average of 6.8t. It did have one of the simplest sets of hydraulic controls though.

Deere’s classic slug-like slider handles depth control and there’s a quick raise/lower button on the side. Setting the depth limit is simple, too, using a roller-wheel next to the slider.

Adjustments like drop speed and draft control are now accessed in the terminal rather than twiddling dials. This keeps the console cleaner, but it’s more fiddly than the the old method. On the plus side there are hot keys on the side that get you to the correct screen quite quickly.

The front linkage is still pretty old-school with no factory fitted external controls and a manual diverter valve to switch it onto one of the spools.

Four spools are fitted as standard and these are controlled using a set of electric paddles on the main console.

These have a float and constant pumping positions built in. Unlike most of the other tractors on test, there’s no cross lever option, and there’s no way of shifting the spools other than hopping out and moving them manually.

Going into the screen allows operators to adjust flow rate accoding to time and there’s a button to lock the whole hydraulic system. Unfortunatley there’s no option to lock individual spools.

There’s no auto pto function other than putting it into a headland management sequence and this will only work if the dash-mounted pto switch is activated.

Deere’s external pto switch is a bit of a faff – this has to be activated in the screen before it can be used and this stops the button in the cab from working.