Earlier this year we published an article about a trial being conducted by Cambridgeshire farmer David Walston, comparing three different drills to sow wheat direct into stubble – a Cross Slot, a Horsch CO8 and a John Deere 750A.

With harvest well out of the way, the data has been collected and analysed and the results drawn up. And – unlike many such trials – there are some significant differences. 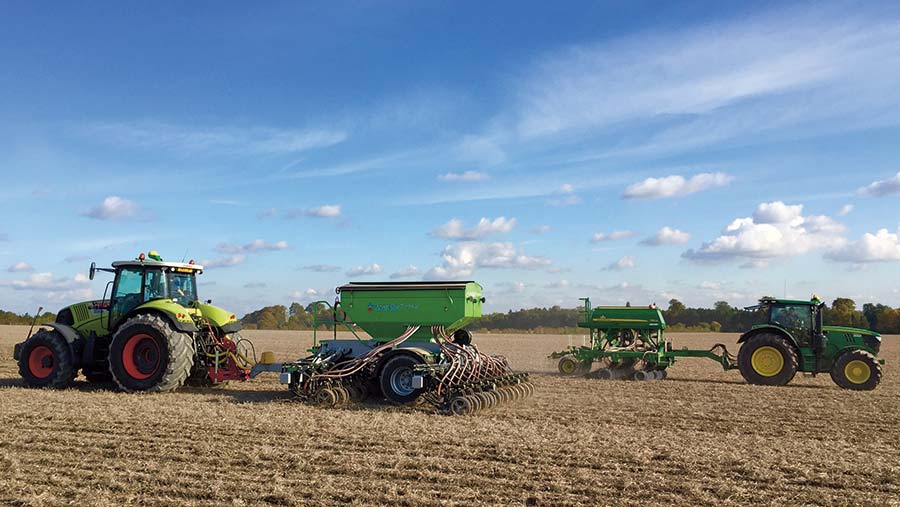 Cross-Slot, John Deere 750A and Horsch CO8 drills were used to sow wheat directly into stubble at Thriplow Farms

Throughout the growing season, plant counts were taken, tillers were tallied up and finally the crops were harvested with specialist plot combines.

The end result was interesting. On heavy land all three did a very similar job, but on lighter ground the John Deere-drilled plots produced significantly more grain.

So the headline news is that, in last season’s growing conditions, on lighter land the crops sown with the John Deere 750A produced more than 8% (0.8t/ha) more grain. But why?

“The Deere scored significantly better on establishment, but then things looked like they were evening themselves out as the season drew on,” says Mr Walston.

“By ear-count time it became apparent that the 750A’s plots were still miles ahead. Maybe the narrower row spacing helped in reducing weed competition, or maybe it just meant the crop was better at intercepting all the available sunlight.”

At the start of the trial Mr Walston didn’t expect to see any significant differences between plots, but the Deere-established areas gradually pulled away.

“It always looked thicker, but again perhaps that was a function of the narrower row spacing,” he says. “At certain times the 750 plots looked a paler shade of green – was that because nutrients were being shared between a bigger number of plants? It might have been that we could have pushed yields further with more fertiliser on those areas.”

Why the yield gap?

What is hard to fathom is why it was only on the lighter ground that those differences translated into higher yields. ProCam agronomist Christina Lankford believes it might be down to lazy rooting on the part of modern cereal varieties.

“With a high plant and tiller population in the John Deere plots, it is possible that in the autumn the crop wasn’t so quick to develop its root system on the heavier soil. So when it came to a dry spell in the spring it wasn’t as well equipped to scavenge for moisture as the crop in the lighter part of the field.

“Consequently, fewer tillers made it through to flowering and hence there wasn’t the yield advantage over the other drills like there was on the lighter land.”

Mrs Lankford also makes an interesting point about the way the drills work the land and the timing of available nutrients.

“The CO8’s tine coulters throw up plenty of soil and mineralise heaps of seedbed nitrogen, so plants in its plots came flying through the ground first – but once that initial flush was gone, they stalled.

“In contrast, the lower disturbance from the Cross Slot and John Deere coulters meant the crops were slower to get going but looked better as spring approached – probably thanks to a steadier release of mineral nitrogen in the seedbed.

“It all comes down to intercepted sunlight – from the start, the Deere’s narrower row spacing meant the crop had greater surface coverage and so from an earlier stage it was capturing more of the sun’s rays.”

So with that in mind – and assuming that Thriplow’s land is a 50:50 split of heavier and lighter soils – Mr Walston drew the conclusion that the 0.8t/ha yield advantage seen on the lighter ground could, in a similar year, theoretically result in an average of about 0.4t/ha extra across the board.

“Even if we see absolutely no yield advantage, what the trial has proved is that on this farm the John Deere can establish crops as well as the Horsch or Cross Slot – and it costs £70,000 less to buy than the latter.”

A reminder of the Thriplow trial

A Horsch CO8 tine-drill has been the front-line weapon of choice for more than a decade at Thriplow and in recent years has been employed to direct-drill cereals when conditions allow. However, wanting to move to more of a no-till approach, David Walston went looking for an additional disc-type drill to complement the CO.

Intrigued by how such an outlay could be justified, Mr Walston wanted to see exactly how crops established with the three different machines would perform on his own land, side-by-side in one field. So in October last year each machine was given a tonne of wheat seed and a 4.4ha plot to drill.

“At first look, the John Deere appeared to be causing more surface disturbance than the Cross Slot but that was probably due to its narrower row spacing,” Mr Walston says. “It has 50% more openers per metre so disturbance per coulter was probably about the same.”

What was surprising was how the two purpose-made direct drills coped with coulter penetration in the relatively dry, hard soils. 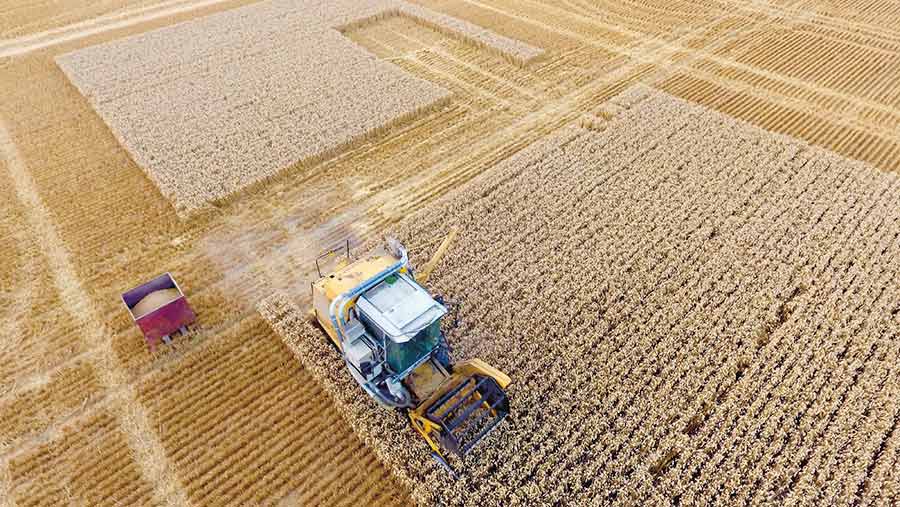 Getting into the ground

The 6m John Deere weighs in at about 6.5t empty, giving a theoretical coulter pressure of 175kg per opener. In contrast, the 5m Cross Slot crosses the weighbridge at a massive 12t empty, thanks to its frame being filled with steel. That means there’s a monstrous 571kg of downforce generated by each coulter.

It needed every ounce of its heavyweight bulk to place seed at the correct depth at the lower end of the trial field, where the soil was heaviest.

“Last autumn wasn’t too dry and conditions weren’t that challenging but you could still see the Cross Slot’s weight was essential to keep its openers in the ground,” says Mr Walston.

As an experiment, the demonstration John Deere drill was fitted with two different types of closing wheel. One half of the machine had the company’s standard smooth rubber press wheels, while the other was equipped with serrated Guttler Prisma rings.

On the day it looked like the retro-fit rings were doing a better job, but that didn’t translate into improved establishment – plant populations were similar on either side of the drill pass.

As the crop came up, plant counts were done to add scientific credibility to the trial. The John Deere’s plots scored best with 85% establishment, while rates for the Cross Slot and Horsch were in the high 60s. Throughout the season tiller counts were done each month to monitor exactly how the different plots were performing.

By mid-spring, some marked differences had started to show themselves. It appeared that the areas drilled with the John Deere 750A had 25-50% more tillers than the parts of the field sown with the Horsch CO8 and the Cross Slot.

“The main difference shown by the wheat drilled with the Deere was that, despite it having the same number of plants per row, there were higher plant populations because it had the narrower row spacing – 167mm rather than the Cross Slot’s 238mm or the Horsch’s 250mm.”