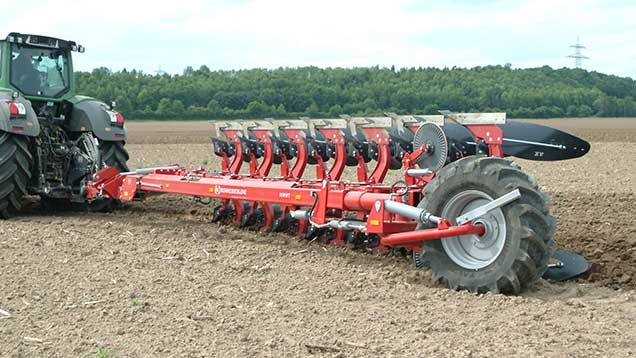 The first products decked out in Kongskilde colours as part of the Danish group’s new single-brand strategy sees the Overum name consigned to the history books.

Ploughs from the factory in Sweden are no longer predominantly blue, but Kongskilde red and silver. Other products acquired over the years – including JF grassland and feeding equipment, Howard power cultivators and Becker precision drills – will follow suit.

Adopting a single brand name and colour scheme will simplify production and distribution, says the company, and put the focus firmly on a single identity, as Kongskilde Industries aims to reorganise, cut costs and achieve the profitability goal for 2016 set by its principal shareholder, the DLG farmer co-operative.

Last year, DLG approved a £2.6m fund to streamline production processes at Kongskilde’s European factories and £4.5m to double production capacity for tillage and fertiliser placement implements at its US operation.

But stung by a £54m write-down of booked values and restructuring costs that tipped DLG’s healthy business into an £18m loss in 2014, the co-operative’s managers are accelerating a revamp of the group in preparation for selling it.

Kongskilde Industries acquired a number of businesses over the years to gain scale and broaden its product range, but profits have plunged to significant losses in the past two years. The streamlining plans shifted up a gear in June, when it was decided that the JF factory would close with the loss of more than 200 jobs.

“We have come far in the turnaround process but see a significant opportunity for improvement by shifting production to Poland,” says Ole Gade, Kongskilde CEO. “There we have a more modern factory and the possibility of lean production.”

The Kutno plant benefited from £9m of investment between 2009 and 2012, half contributed by EU Structural Funds used to assist poorer areas of Europe.