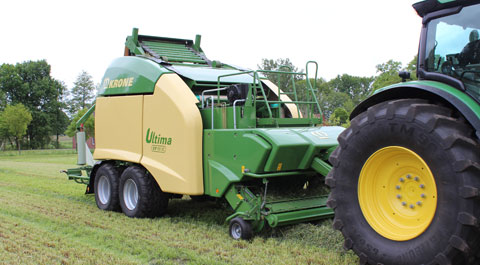 Round balers are getting faster and faster, but the fact they grind to a halt every time they need to tie a bale seriously limits their potential.

Several manufacturers have tried to solve the problem by building a non-stop machine, but German manufacturer Krone believes its new Ultima is the first one that works properly.

We got our first glimpse of the 10t monster at last year’s Agritechnica show in Hannover, Germany. But we got to see it working for the first time earlier this week during a demonstration day near the firm’s Spelle factory.

Running in a heavy crop of green rye destined for biogas production, the Ultima managed to churn out and wrap bale after bale without stopping. It wasn’t running at full capacity, but was still producing a quality bale every 59 seconds.

The reason the Ultima can do this is that it has a clever pre-compression chamber made up of two almost parallel, spinning belts that hold and squeeze the incoming crop while the previous bale is forming.

When the bale is ready to tie, these stop turning, reverse momentarily and pinch together at the chamber end, holding material at the front of the machine. This allows the tractor to continue to drive forwards while the bale is netted and no stray crop gets tangled in the net.

Once the bale is complete, it rolls by gravity into the wrapper. Meanwhile, the two belts release their reservoir of straw of silage into the chamber to start the next bale. Crucially, the belts compress this material so the core has a good density.

While the bale is being made, the semi-variable chamber is fixed for the first 80cm, but it switches to variable to complete it. This means there is a big enough area to take the stored material, but it is small enough to ensure a good density in the core.

Krone says the Ultima can match its top-end Comprima baler for straight-line speed, and because it doesn’t have to stop, can make up to 50% more bales an hour. This means it can produce a bale every 40 seconds, which equates to 90 in an hour. Bales sizes can range from 1.25m to 1.5m and it works in most crops including silage, hay and straw.

To prevent overloading and blocking of the pre-compression chamber, the Ultima is fitted with a tractor management system. This controls forward speed according the quantity of material in the machine. Drivers can adjust the level of input from the system and can even switch it off, but if they do so they need to keep a close eye on the system to prevent blockages.

An in-cab monitor shows operators how each part of the baler is performing and there is an indicator that tells them how close they are getting to target of producing a bale every 40 seconds.

One downer is that it lacks a system for turning or flipping the bale. There should be one on its way, but in the meantime it’s probably best to steer clear of hillier ground.

Krone says it plans to sell a small number of Ultimas this year to contractors in The Netherlands and Germany. It is not sure when it will be coming to the UK, but when it does the price is likely to be about £100,000.