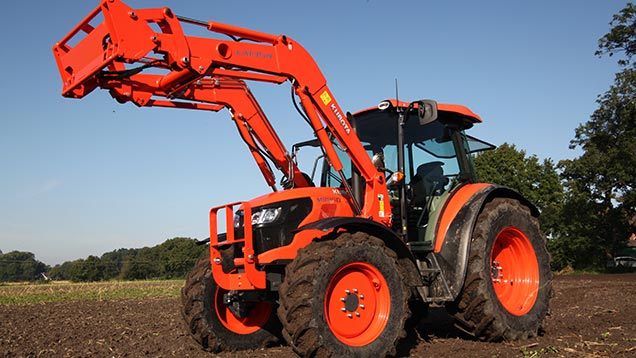 The little Kubota looked a bit out of place alongside our test line-up. Although it matched the rest for power it has a smaller chassis and is generally more basic, while the next model up was too powerful to be included.

Despite that, we quite liked the six-post cab design. It’s light and airy, even with some girthy B-pillars, although the small dimensions don’t afford any space to take a friend.

Views from the driver’s perch are generally pretty good, too. The front windscreen loops upwards to make amends for the lack of a roof window, however, the seating position is well above the dash, which leaves operators hunched over. There’s no reach adjustment in the steering wheel either, so it’s impossible to make yourself completely at home.

On paper, at least, the little Kubota packs a meaty punch. It is rated to 106hp – the highest on test – but delivering those beans efficiently was the tractor’s biggest problem.

With its maximum 90hp being thrown out at the pto, the engine roars away at 2,400rpm, while all of the other test tractors reached max power around the 1,800-1,900rpm mark. That would surely take its toll on the tractor over the course of its life and is reflected in its fuel consumption, where it had an almost unquenchable thirst for diesel.

For field work, there’s also a constant rev mode that encourages the engine governor to fire more fuel into the cylinders to maintain the rpm, though it was hard to notice a difference and takes fuel consumption through the roof.

The hard-revving engine drives through a 36-speed gearbox. Three ranges have six speeds and a high/low splitter operated by a single button on the side of the stick, but realistically you need at least three powershift steps to make it worthwhile.

Gearshifts were clunky and we often found it difficult to slot the stick into the correct speed gate. Unlike many of the other tractors on test it also had a park position, though it was so stiff we resorted to using the handbrake.

The Kubota set itself apart from the test group in offering a heavy hydraulic shuttle. Though it’s still clutchless, the long travel made it a whole-hand job to switch from forwards to reverse and the shunt often felt harsh.

Things are equally old-school in the diff-lock department, where the driver has to keep a heel pressed on a cab floor stalk. Electrical engagement of the four-wheel drive is a little more up-to-date.

Its tiny frame limited maximum tyre size to 480/70 R34s. At 2.25m, it had the lightest body and shortest wheelbase, too, which meant on the road it got bouncy as soon as there was a load on board. It also leaps across the splitter speeds and, with your foot to the floor, shouts hard.

However, the small dimensions have their benefits in the yard, where it had an 8.8m turning circle. That betters the second best by more than 1m.

The external spool block is mounted to the left of the top link, though it’s not as inconvenient as the New Holland’s. Flow can be set on one of the three valves but we found it pretty crude because it almost worked as an on/off switch.

Things get worse in the rear hitch department, where the only option is a basic mechanical linkage.

In its defence, the two levers for height and draft are easy to use, and there’s a twist system behind the seat to adjust the drop speed. However, the external ratchet set-up to raise and lower the link arms does not benefit a modern 100hp tractor.

The Kubota also offered just two pto speeds – 540 and 540e – though the latter can be exchanged for 1,000rpm. Speed selection is done externally near the rear linkage, but there are no automatic functions.

A square-bodied lever controls Kubota’s own, American-built loader. However, there’s too much joystick travel and, pushed right forward, draws the driver out of his seating position.

A quick-release spool block is part of the generous package, as is hydraulic levelling and damping.

A small frame and big power sounds like a recipe for loader tractor success. However, the Kubota had too many shortcomings, particularly where fuel consumption and rear linkage were concerned.