We must always produce more to feed a constantly growing population.

Agriculture will have to produce more in the 50 years to come than in the past 10000 years. With less arable land, with less energy and with less water. While preserving the environment.

Agriculture has already succeeded in feeding a population that has been multiplied by 6 in 200 years.

With you, we are ready to face this new challenge.

During these extraordinary times, the role that agriculture plays is vital – we have people to feed! Together with its dealers, KUHN has continued to support farmers and contractors, by providing them with the equipment, support and services they need to do their job and Feed the Nation.

Both farmers and agricultural contractors have maintained full operational capacity throughout the coronavirus pandemic, adopting safe practices and social distancing measures to keep themselves, their employees and their customers safe.

KUHN plays a full part in this, providing support to its dedicated dealer network to ensure continual parts and technical support.

This has been made possible through the increased use of online tools, technology and training for remote working. In addition, KUHN has seen a much higher demand for its online parts ordering “Click and Collect” system in the MyKUHN end customer portal.

One contractor that exemplifies a modern approach with a focus on helping farmers improve efficiency and provide food more effectively is John Trefor Owen. 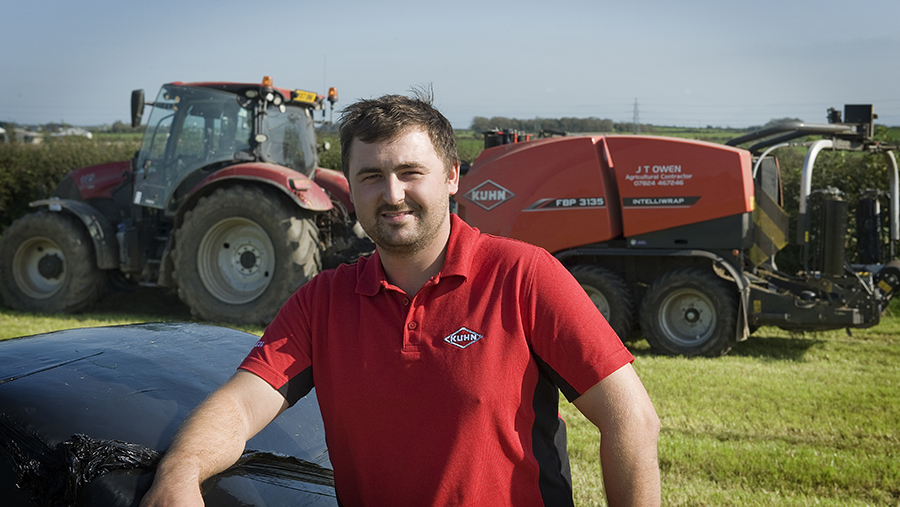 John with his FBP Balepack

Although just starting out, his determination to give his farmer customers a first-class service has seen rapid growth in his business.

Operating almost exclusively on Anglesey, he’s specifically noted an increased requirement for baled silage and has invested in specialist equipment to meet the needs of his customers.

Last summer saw the arrival of his first Kuhn FBP Balepack baler-wrapper combination and – such is the demand for his services – he’s already taken delivery of a second machine for this current season.

From a family farm at Llanddeusant, John set his sights on running his own contracting operation from a young age.

In addition to working with his grandfather and uncle, he’s gained experience from a two-year spell in New Zealand, grassland contracting on large scale dairy units on the South Island.

“Working in New Zealand has been a brilliant life experience and has taught me a great deal,” says John. “The farming is not that different to what we have in north Wales; it’s just on a bigger scale.”

Since returning home, and still only 24, John has set up his own business, J.T. Owen Agricultural Contracting, initially taking on some equipment from his uncle.

Alongside his Case Maxxum 145 tractor and his two baler wrappers, he also runs a four-furrow reversible plough, a three-metre pneumatic combination drill and two front and rear mounted mowers.

Based at Garndolbenmaen in Gwynedd, M-Trac Cymru provides the vital parts and servicing back-up essential to keeping a busy contractor operational.

Having experienced other makes, and worked with stand alone balers and wrappers, John was attracted to the FBP combination for several reasons, but the stand-out advantage is its ability to bind and wrap bales using a single type of film.

“Having the option to bind bales with the film, as an alternative to net, is a game-changer for our customers,” says John. “Once they have experienced film binding with this machine, they are reluctant to go back to any other kind of system.” 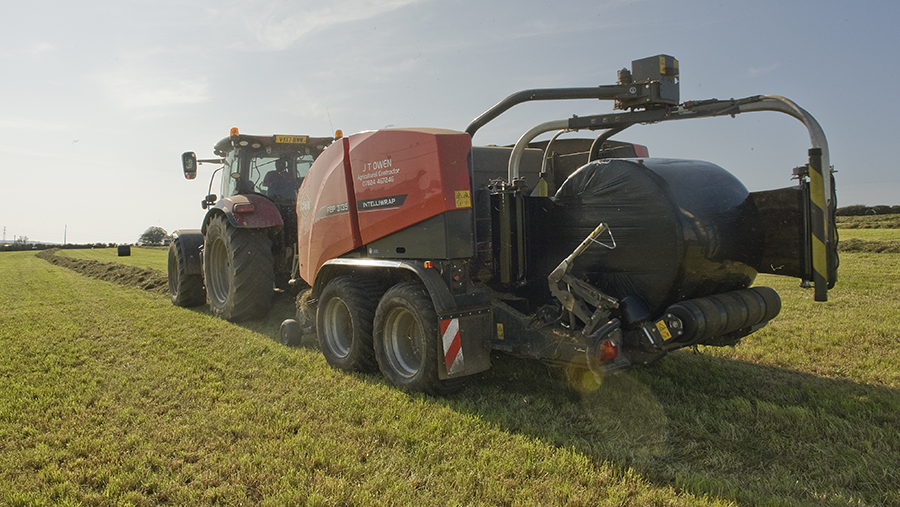 The Kuhn FBP Balepack has the capability to film bind bales, a feature that John says is a game-changer for his livestock farmer customers.

The film binding technology on the FBP is industry-renowned, having been recognised with an innovation award at LAMMA in 2019.

The real benefit is higher quality silage, as bales are first made air-tight from the binding layers and then have the reinforcement of additional layers of film from the wrapping.

As the same material is used for binding and wrapping, the whole process is more cost effective and there is the added advantage of having only a single material to deal with when it comes to recycling.

With two FBP baler-wrapper combinations operating simultaneously, John is now able to offer a very fast and effective service and is now working with some of the biggest dairy farms in the area.

“Bales are becoming more popular again, because they are now seen as a source of high quality forage and offer levels of flexibility that you don’t have with clamped silage,” adds John.

“With good grass crops, we can bale and wrap 45-50 bales an hour with one baler, so with the two machines we’ve no problem tackling 100 acres at a time.

“Apart from the film binding capability, the FBP is also second to none in terms of its pick-up and intake design. Features like the rotor disengage facility are really important in terms of keeping the machine running through a range of conditions.”

Whilst grass silage is a big part of John’s work, he’s also involved with hay and straw baling on Anglesey, so the ability of the baler-wrapper combinations to swap from film binding back to net binding is essential.

“We can very easily switch between the different modes, depending on what the customer wants,” he says. “Working as a contractor you need to be adaptable and its vital to have machinery that’s both versatile and reliable.”

With a close friend operating a large capacity rake, and John and his uncle running the baler-wrappers, J.T. Owen now offer a formidable service when it comes to round bale harvesting.

Looking ahead, John sees a good future in baled silage, as more farmers look to build greater resilience into their systems by relying more heavily on quality forage.

Whether for supplementing summer grazing or as the basis of out-wintering, quality baled silage has a place on the modern progressive dairy farm and J.T. Owen Agricultural Contracting is gearing up to provide the best possible service.