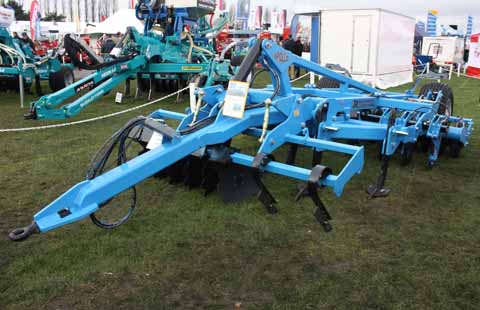 Faced with the challenge of cutting rape establishment costs, farmer’s son James Richardson was reluctant to go full-bore down the “scatter-and-hope” broadcasting route. Unable to find a machine capable of guaranteeing results whatever the conditions, he developed his own purpose-built cultivator drill.

When designing the unit he says the key requirement was a machine able to work as either a true single-pass cultivator or as a sub-soiler/drill combination.

In drilling format the 3.2m Apollo has a row of leading tines running ahead of five staggered Sumo sub-soiler legs. A row of Moore disc-coulters follow this running 150mm (6in) either side of the tines.

Linked hydraulically, these are said to maintain an even pressure and depth, irrespective of surface undulations. Seed can be supplied by any regular air-seeder unit such as Opico’s Variocast or Stocks’ TurboJet.

Finally, there’s a choice of either Tillso’s diamond packer roller or Mr Richardson’s own non-stick packer that uses a combination of wide-spaced Hardox press-rings and slippery, hard-wearing plastic to ensure soil doesn’t build up in tricky conditions.

To swap the Apollo over to its conventional cultivator role, the leading tines are swapped for a row of scalloped discs ahead of the sub-soiler legs and following these, a second row of discs replaces the coulter bar. The switchover job is reckoned to take about half a day.

For more on LAMMA 2012 see our dedicated page.