Gale-force winds might have brought this year’s Lamma show to an abrupt and early halt, but Farmers Weekly managed to capture the highlights before the weather turned.

See a selection of the tractors and sprayers on show for the visitors.

The green and cream livery of Chinese-Italian tractor brand Arbos has become a familiar sight at foreign shows, but this year’s Lamma was the first time one has been spotted in the UK. 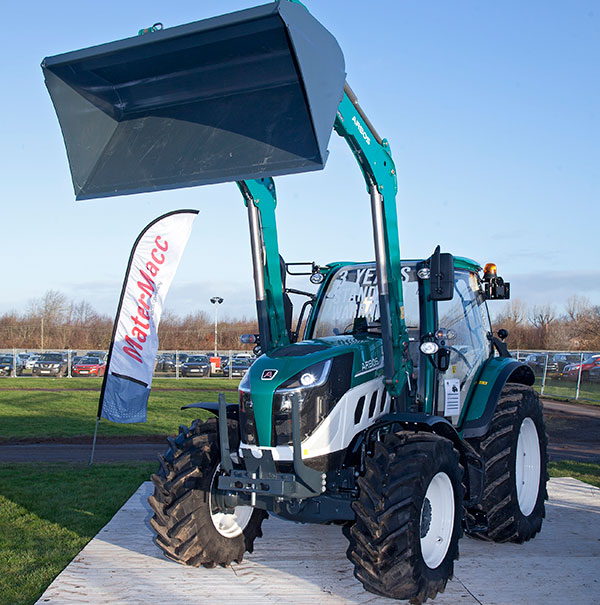 Since the maker burst onto the scene a couple of years ago, it has been busy developing, testing and getting type approval for its new machines, which will run from 26hp to 270hp.

But with this phase nearing completion, certain models are going to be ready for sale this year, including the mid-range 5000 series. The 5100 model pictured is the smallest of the bunch, coming with a 110hp 3.4 litre, four-cylinder Kohler engine and the choice of two transmissions.

The simpler of the two is a two-speed powershift with mechanical shuttle and the more advanced version has a three-speeder with electro-hydraulic forward/reverse. At the moment, the list price is €52,900 (£46,682). There are also two more models in the range developing 120hp and 130hp.

The tractor was being shown on the stand of sister brand Matermacc and it’s possible the machines will be offered through some Matermacc dealers.

Famers in search of a reverse-drive tractor might naturally migrate to Valtra or Fendt, but it turns out Case-IH can offer it too.

Austrian firm Kneidinger – based near Linz, Austria – carries out the conversion, which involves fitting a new rear steering column and steering-wheel boss. This allows the standard steering wheel to be flipped from front to rear. 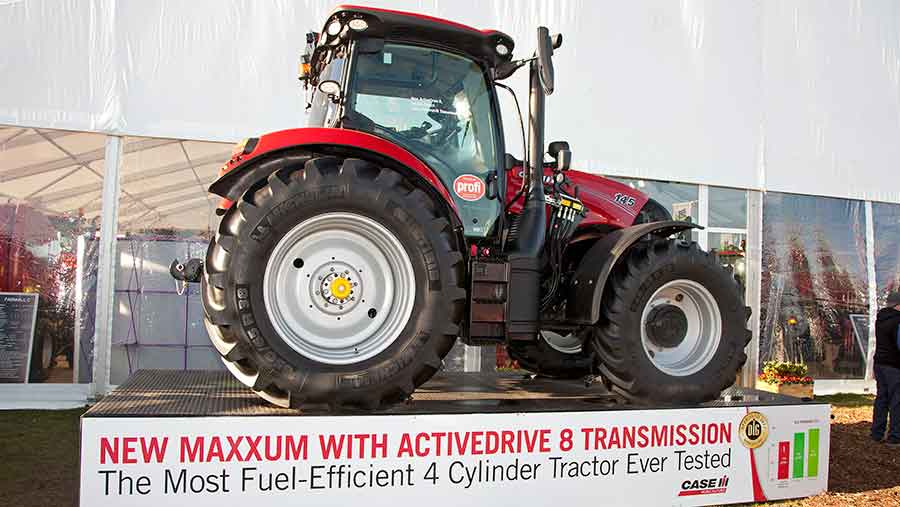 A 180deg swivelling seat base is installed, too, along with reshaped side and rear cab panels to make a bit more space for the driver’s boots.

The conversion can be added to Maxxum, Puma, Optum and Magnum models and costs roughly £7,000.

Also taking pride of place on the stand was the new Maxxum with Active Drive 8 transmission. This ZF-based unit offers three ranges with eight powershifts in each, all of which will shift automatically. A Maxxum 115 fitted with this ‘box has a list price of £76,000.

Kubota has been busy fettling its top-end four-cylinder tractor range in a bid to return better fuel economy and give peppier performance.

The potential fuel savings have been achieved by tweaking the 6.1 litre block so that max power is now achieved at 1,900rpm, rather than the 2,100rpm figure on the previous models. 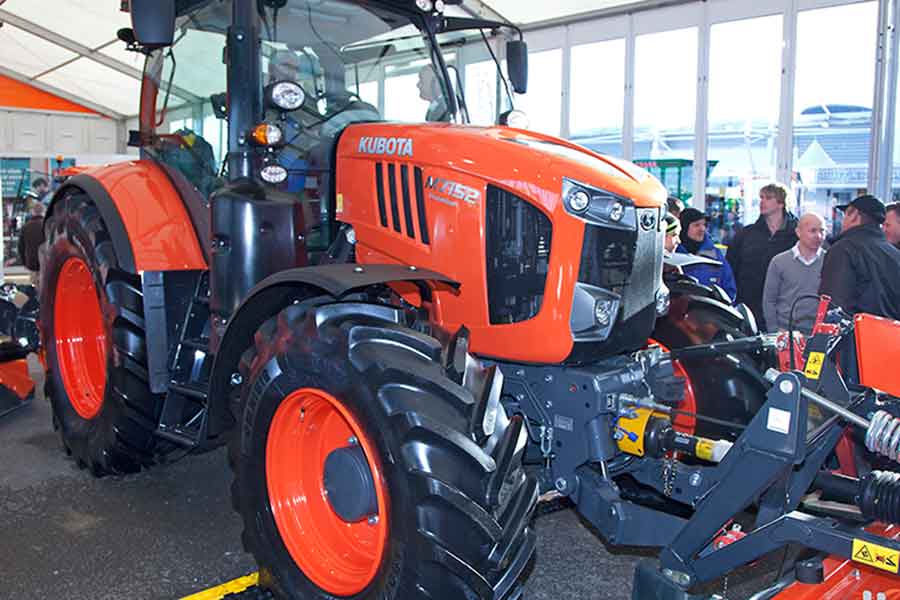 Meanwhile, the addition of some extra brains in the engine department means it can automatically increase power when it notices a fall in rpm. This should be useful when you hit a sticky patch while cultivating.

The updates have also brought in a numbering change, with the new range designated 7002 rather than 7001. But despite the improvements, overall power outputs remain the same, with the range-topping M7172 (pictured above) kicking out a boosted 175hp, just like the outgoing M7171.

However, there is a new six-speed powershift transmission, which houses 30 forward speeds and 15 reverse gears. The new gearbox has two powershift overlaps in each gear to make shifting smoother and speedier, and there’s an option of a creeper box.

Some handy new technology has also been added in the cab, such as a new headland management system, which allows 20 implements to be programmed into the memory – previously this was only two – and a nudge function on the auto-steer guidance package.

The three models – M7132, M7152 and M7172 – are built at the firm’s factory in northern France, with the display model at Lamma a pre-production unit. UK-ordered demo machines will be rolling off the production line next week and we’re told prices are to be “kept conservative”.

One of a handful of tractor makers trying to muscle into the UK market is Austrian firm Lindner, which was showing off its latest machine – the Lintrac 110.

First unveiled at Germany’s Agritechnica show, it comes with a Perkins four-cylinder engine up front that develops 118hp. As with all of Lindner’s machines it’s been designed to spend a good chunk of its time operating on hillier-than-average ground, which means it has a low centre of gravity, a ZF CVT transmission to give uninterrupted power and the option of four-wheel steer. 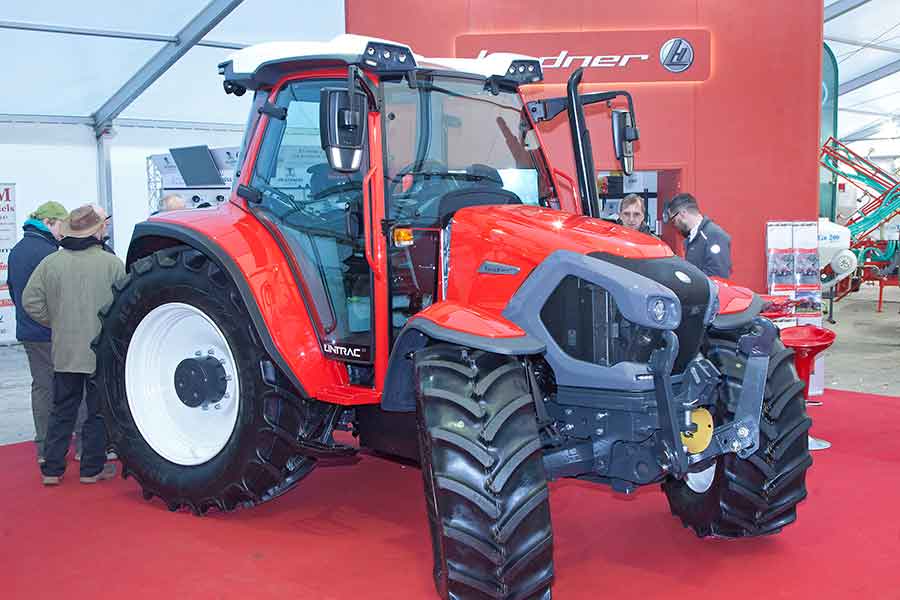 So far, Lindner has no UK dealers, but it does have three in Ireland, where a total of about 15 machines have been sold. Most of these are the smaller Geotrac 84ep model, which has a 95hp Perkins under the hood and a ZF semi-powershift box.

News from the green giant’s stand came at the smaller end of its repertoire, with a revamped version of its small-and-simple 5E range.

The Indian-built tractors have been given new styling, similar to that of the 5M, and the option of a slicker transmission with an electro-hydraulic shuttle, 24 forward speeds and 12 reverse. 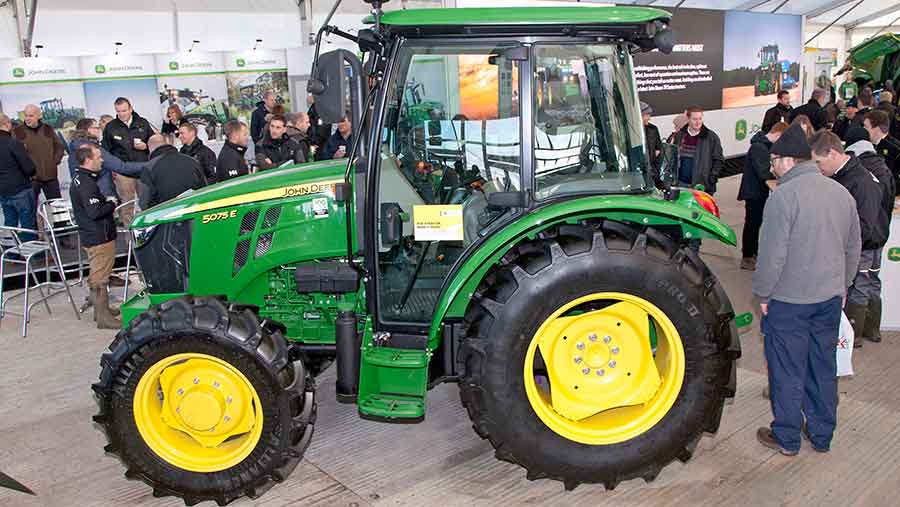 The 5075E is the biggest of the range, with 75hp on tap, a maximum rear linkage lift of 1.8t and boasts a 4m turning circle. There are also two mid-range models offering 58hp and 67hp.

At the bottom end there’s a new 49hp, 5050E model, which retains the older, simpler transmission.

On the Landquip stand there was a demount sprayer married to a JCB Fastrac 4220, which was sporting a bright yellow drift-reduction kit across the full length of the booms.

Once the sprayer is unfolded, the yellow plastic tubes fill with air and hang on the rear of the booms with small holes funnelling air down to the crops. 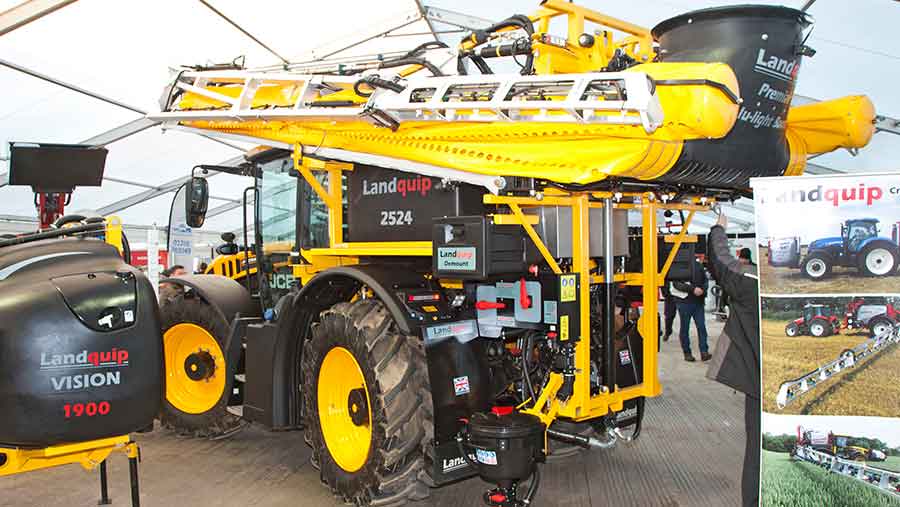 The spray nozzles are angled into the air stream, which acts as a wall to carry the liquid straight onto the target area.

An 800mm fan runs from the tractor pto at 1,000rpm to provide enough air to keep boom widths of up to 30m filled, with a geared or piston pump optional.

Exporting to Holland for spraying flowers looks like a big market, although farmers and contractors over here will see benefits when the wind gets up as the target area is still accurately hit. The optional extra will cost £21,000.

Replacing Berthoud’s Tenor range of trailed sprayers is the new Vantage, which was seen for the first time at Cereals last year.

Shown at Lamma in Dark spec, this is now the standard and only equipment level offered on Vantage sprayers, which includes boom lights, electric hydraulics and Isobus connection. 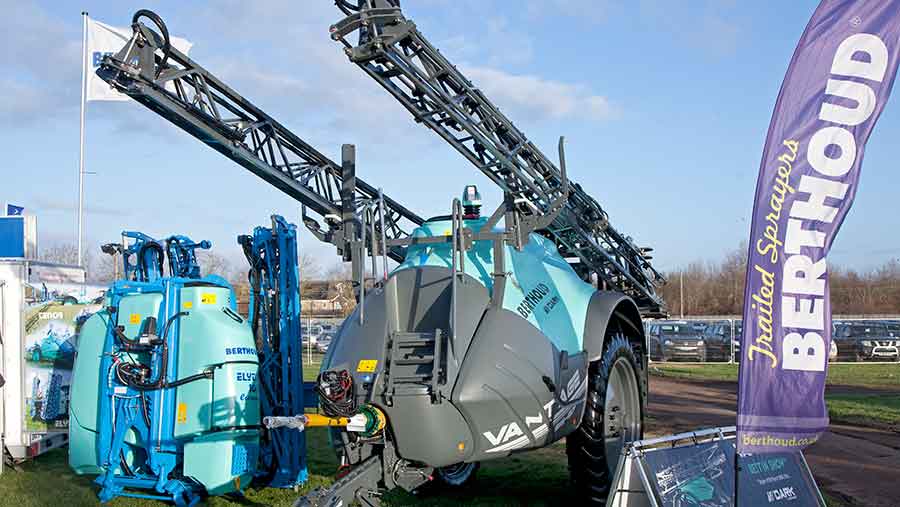 The sleek-looking model is available with aluminium booms up to 44m or steel ones spanning a slightly narrower 38m, with tank sizes from 2,800 litres to a monster 6,700 litres.

Improvements from the Tenor range include a sealed induction hopper with rim wash functions when the lid is closed, and the option to have a VTronic box in the cab to house all the sprayer controls. Whereas Isotronic sees the sprayer controls appear on a Trimble screen, removing the need for multiple displays.

Horsch only broke into the UK spraying sector four years ago, but since then UK farmers haven’t been shy with shelling out cash for the tech-clad sprayers, with 2017 seeing a growth of 25 machines on the previous year. 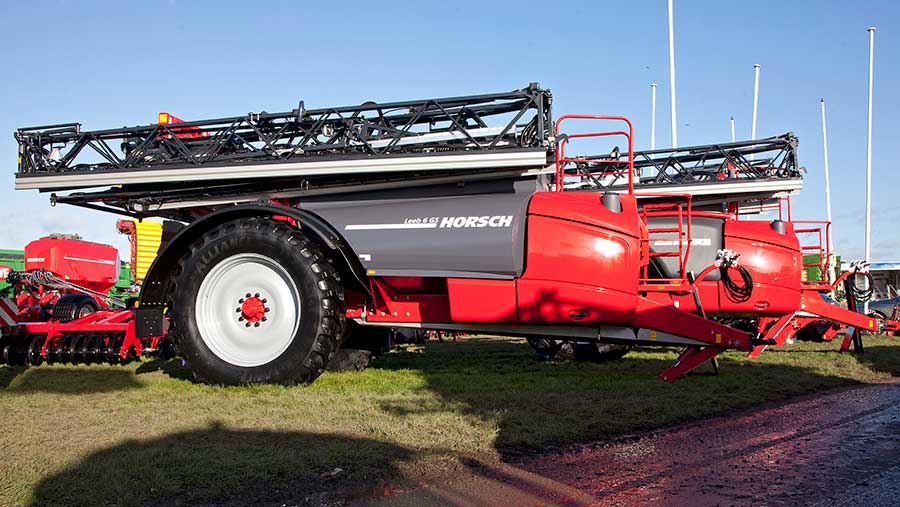 Most of these units are trailed and the newest family member – the Leeb GS – was on show at Lamma. It has a stainless-steel tank, available in sizes of 6,000, 7,000 and 8,000 litres and aimed at contractors and farmers covering a lot of ground.

The large liquid volumes are kept in place by welded tank baffles, preventing a forward surge under heavy breaking, while a rotary 1,000 litre/min pump is optional for sucking the liquid in quicker. Boom technology from the LT series is used and widths of 18-42m are available.