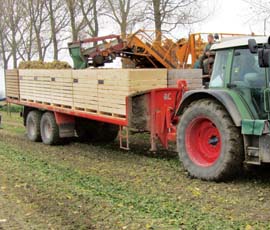 ith a record number of exhibitors, this year’s LAMMA event offers visitors a wealth of new products to observe, assess and comment on.

Probably one of the most eye-catching products on the Richard Larrington stand at LAMMA will be the new Ejector Trailer. These trailers don’t tip they push the load out the back of the trailer and Larrington claims to be the first UK trailer manufacturer to offer such a system, which is deemed to be safer than conventional tipping methods.

Other new developments include the raise and lower drawbar which uses hydraulic rams to lower the front of a flat-bed trailer so that, when the trailer is used to transport potato boxes, the driver can see all the boxes from the tractor cab and make their filling more accurate.

For those who grow over-wintered root crops, Larrington is also is also introducing a new straw remover, a trailed machine which is claimed to have a higher rate of work than earlier front mounted models.

New heavy-duty pto powered roller mills available from Kelvin Cave are claimed to offer outputs from 20t to 40t/hour and be capable of processing all cereal grains and pulses with up to 25% moisture.

There are two models – the Bruiser 1000 and the larger Bruiser 1250 – both of which can be fitted with grain preservative applicators and an on board weighing system. Magnetic ferrous debris collection is standard.

According to UK importer, Stephen Berry, Kockerling’s latest pneumatic drill is designed to be a simple straightforward design and is based on the company’s Allrounder profiline cultivator.

The Jockey is available in 4.8m and 6m builds although it can be, if specified, extended out to 8m, 9m and even 10m versions.

Power requirement is put at just 25hp a metre and the drill comes as standard with radar/hydraulic metering, control system and 2,800 litre seed hopper.

Drilling depth is set manually using pins at the rear and depth wheels at the front, and the drill is suitable for use on ploughing, stale seed-beds and direct on light to medium soils.

Ten years ago, Claydon exhibited its first direct drill at LAMMA. At this year’s event the company will be showing its latest development, the Hybrid, alongside a new straw harrow which is considered to be an important part in the overall effectiveness of the Claydon System. Trials reveal, says the company, that wheat yields have shown a 26% increase when compared with conventional plough and cultivate establishment systems helping to boost crop returns by £333/ha at current crop values. 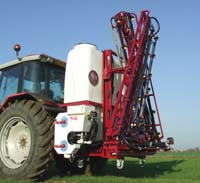 The new Sigma tractor mounted sprayer from Team Sprayers has a close coupled design which brings the weight of the sprayer close to the rear of the tractor.

Available with 800, 1000 and 1,200 litre tanks, the Sigma replaces the company’s Custom Standard range and is supplied with booms from 12m to 18m, all of which fold to a 2.4m transport width. 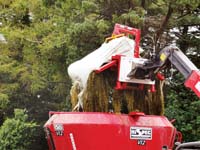 Using Hi-Spec’s Bale Strip, one man is able to remove film and net wrap from around silage bales and then break up the bale so that, when it is placed in a mixer wagon, the mixing time is reduced.

A two-spike loader attachment with a claw is used to grab the film and net wrap. The bale is pierced near its base by the two spikes and is lifted up and lowered on to a static knife on the mixer wagon which cuts the film. At the same time the grab takes hold of the film and the spikes are moved outwards to break the bale apart.

Hardi’s Navigator sprayers can now be fitted with the company’s HC6500 controller with an Isobus option to allow an existing Isobus terminal to operate the sprayer.

Users of Navigator and Commander sprayers with HC6500 controllers can be updated to an Isobus sprayer – an Isobus bridge is available from Hardi.

The tractor-mounted Master sprayer is now available with vertically folded Pro booms from 12m to 28m – a steel lattice design is claimed to optimise weight and strength.

Househam has introduced its own Telematics operating system which allows access to the machine’s Total Machinery Control (TMC) system from the farm office and from the Househam factory – even when the sprayer is operating in the field.

Trima is set to reveal its new T220P loader at LAMMA. Joining the companies 200 Series this new parallel linkage loader is designed for use with 50hp to 80hp tractors and has a lift capacity of 1,090kg to a maximum lift height of 3.5m.