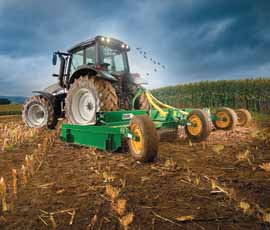 Major Equipment plans to reveal its new 5.4m Maize Topper – a machine which is used post harvest to shred the plant remains left in the field.

This machine, says the company, has been developed in response to crop losses in Germany caused by a parasite called the European corn borer which causes serious yield losses. By shredding the plant residues using a “bullet” cutting system, the caterpillars which over winter in the plant are destroyed.

Capable of cutting 18 rows of maize in one pass, there is also a blade kit available which can be used for topping grass at other times of the year. For transport the unit folds to a width of 2.2m.

Keenan plans the introduction of iKeenan at LAMMA – the “intelligent” mixer wagon system which is designed to provide dairy and livestock farmers with an unprecedented degree of control over a rations formulation, its ingredients and the way they are mixed.

Included in the new system is use of a new “Cloud” web-base for remote ration modifications and an innovative mixing control which ensure an optimum degree of diet texture.

Combine these two new developments with the company’s PACE system, which provides user information of ingredients, mixing sequence and is the link between diet formulation and production, and you have iKeenan.

Dale Drill’s Eco-Drill has been further developed for the coming season by fitting an accumulator in the hydraulic circuit for the tine assemblies. This, says the company, means that pressure to the tines can be maintained without the tractor having to constantly pump oil. An adjustable pressure release valve allows the operator to set the pressure to the tines and, as a result, set drilling depth in respect of soil type and conditions. 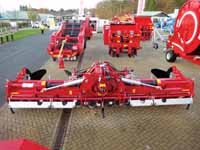 Grimme is set to launch its first hydraulic folding Rota Tilla complete with ridging bodies for three beds. The RT540-2 has a 5.4m working width which, with the wings raised, folds to a legal transport width.

The driveline to the rotors incorporates a three-speed gearbox and enables rotor speed to be set to suit different soil types and conditions.

As an option Grimme offers the RT540-2 with a heavy-duty Rota and shear bolt protected bodies – a combination which is said to make it suitable for tilling directly into ploughed land.

Shelbourne Reynolds’ latest range of hedge and verge trimmers will be at LAMMA. The 300 Series has a fixed frame and is represented by the 5m reach 350 model, and the 400 Series includes the 5m 450 which is able to slew.

New for the company’s 700 Series (formerly the HD range) is the HD767VFR forward reach machine which has a 6.7m reach boom and a forward range of 1.7m. A proportional joystick is standard and a 1.5m head can be specified.

Constant working depth is achieved through use of a floating linkage system which allows the Boron knife blades to follow ground contours. 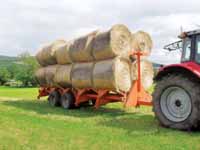 Additional weight can be added as necessary to help ensure adequate ground penetration.

As with earlier models, arms are lowered hydraulically to spear the bales on the ground and then raise them on to the trailer deck where they are held securely.

The new bale carrier has a stronger, lightweight frame with tandem axles and all round suspension.

Horstine is launching a new oilseed rape seeder at LAMMA. Called the ProSeed, it is a pneumatic unit which can be fitted to subsoilers and cultivators to either broadcast or band sow oilseed rape.

Built for use with cultivators up to 6m wide, its 200 litre hopper is fitted with a “low seed” warning system. Seed is metered through eight outlets with the application rate controlled so that, once set, it remains constant irrespective of changes in forward speed. AGPS speed sensor is standard.

An electrically powered fan provides the air which conveys the seed to the spreader plates or banding outlets.


LAMMA preview: Best of the industry on offer