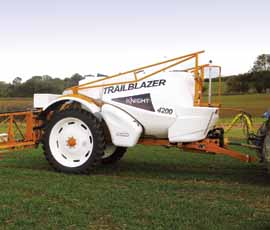 LAMMA is the first outing for Knight’s latest high capacity trailed sprayer – the Trailblazer – which features a new tank design which lowers the centre of gravity and reduces axle loading without increasing sprayer length.

The tank, which, depending on model, has a capacity of either 3,600 or 4,200 litre, also has two integral wash tanks.

Boom width of up to 40m can be specified and the sprayers are equipped with a rigid axle and a steering axle. Air braking and air suspension are optional. 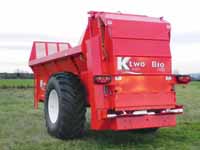 K-Two Sales takes its new Duo and Bio muck spreader ranges to LAMMA for the first time. The Duo range comprises six models with capacities from 6-14t and uses twin vertical beaters, while the three-model, 11-14t Bio range uses horizontal beaters and spinning discs for a spread width of up to 24m.

Both ranges use a new monocoque body design which is claimed to provide a 12% increase in capacity when compared with earlier models, but still allows use of larger wheels without affecting overall width. 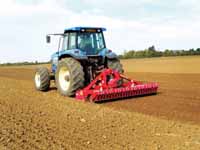 LAMMA will be the first opportunity for Reco to introduce the Brevi range of power harrows and cultivators it started importing in November last year to fill the gap left by the departure of Maschio equipment.

Available as standard on the DPX 28 and optional on the smaller two, is the Tribord 2D border spreading system which is controlled electrically from the operator’s cab.

Kverneland and Vicon machinery can now benefit from the introduction of a series of advanced application controls designed to improve accuracy and efficiency within precision farming systems.

GEOcontrol, a GPS-based system which has been developed for use with the company’s IsoMatch Tellus dual-screen terminal, allows a greater level of task control including automatic on/off and section control for headland management with sprayers, spreaders and seed drills.

There is also GEOspread which allows fertiliser spreaders to automatically adjust spread patterns, working widths and application rates on the move, and there is GEOseed for the control of the Group’s maize and sugar beet precision drills.

The 3m mounted and 3m trailed Mzuri Pro-Til strip seeding drills are set to make their first appearance at LAMMA. Developed as a means of reducing cereal crop establishment costs, use of the drill last year is reported to have resulted in increased yield due to its ability to avoid soil moisture loss. Mzuri puts the saving on crop establishment at £100/ha.

Michelin is preparing to launch two new sizes of its CerexBib combine harvester tyres. Purpose-built for large machines, the first to be launched is the IF 800/70 R38 CFO (Cyclic Field Operation). This will be followed by the IF 900/60 R38 CFO.

The manufacturer says these tyres are being launched in response to the continued introduction of ever heavier equipment. Maximum grain tank capacity is expected to increase to 14,500 litres in 2012 from 11,500 litres in 2011. 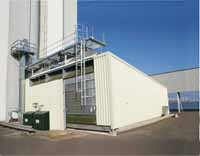 Refinements made to Alvan Blanch’s Double Flow grain drier system are designed to result in a reduction of energy costs. While heat recovery from the cooling section of the drier has been a feature for some time, the company has now turned its attention to recovering heat from the final drying section.

This latter feature will now be offered as an option on all driers, says the company, and adds that it is also providing insulation for plenum walls to reduce radiated heat loss and ensure almost all of the energy is now used in the grain drying process. 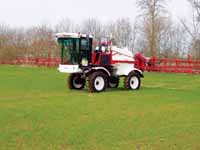 Visitors to the FarmGem stand at LAMMA will discover the firm’s new self-propelled Sapphire ll sprayer. Hydrostatically driven, the machine is powered by a Perkins engine rated at 200hp. Tank sizes range from 3,000 litres to 4,000 litres and boom widths from 24m to 36m.

A new development for the company’s Gem-Trak trailed sprayer range is the introduction of larger 5,000 and 6,000 litre models complete with steering axle as standard, and a electro-mechanical steering version available as an option.


LAMMA preview: best of the industry on offer