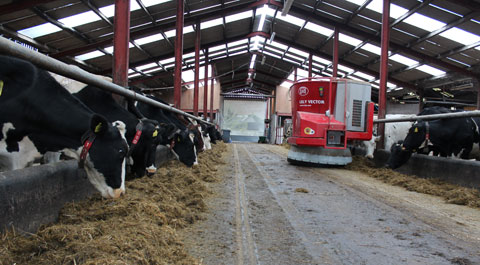 Robots and livestock may not sound like obvious bedfellows, but Lely is proving that the two can dovetail together very neatly.

Sales of the firm’s Astronaut milking robot are healthy – 150 units have been sold in the UK and Ireland this year alone. Its robotic feed pusher and yard scraper are also proving that anything that cuts labour requirements (especially on boring, repetitive jobs) is likely to appeal to cost-conscious stock farmers.

But the arrival of the Vector fully automated feeding system marks a further step forward. It’s also easy to use, says the company – in fact it’s all controlled from a smartphone, using Bluetooth to interact with the control box. 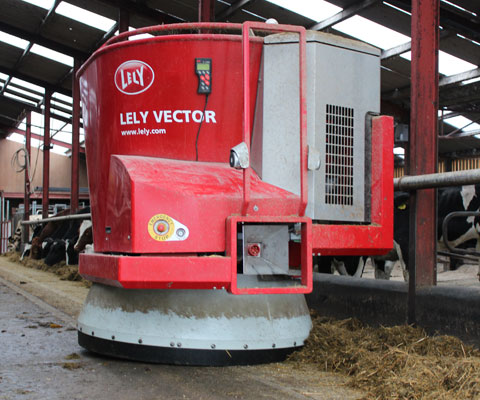 The key part of the system is what Lely calls the feed kitchen. That’s just a posh name for the shed or barn where the feed ingredients are stored. These are stored in bins, with up to eight different roughage ingredients split into separate bays on the shed floor.

Each bay is divided into rectangles, so the shed floor effectively looks like an elongated chessboard.

Each of the rectangles can be filled separately if you have a block cutter to grab silage from the clamp. If not, the whole bay can be filled loosely. These supplies can last as long as five days, depending on the herd size, weather and quality of the feed. 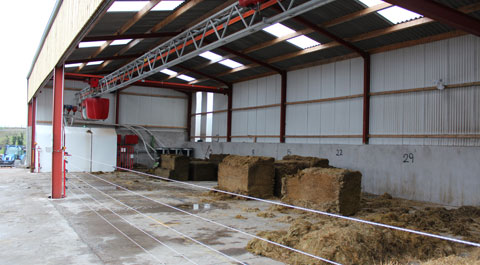 Filling the Dalek-like tub feeder is done by crane. Various types are available but the cheapest and most practical is the gantry system. This moves on wheels, so it can make use of existing shed space, provided the floor is level.

Once the control system signals that the tub is ready to be filled, the crane picks out the ingredients to make up a pre-programmed ration. Up to 16 rations can be prepared on Lely’s smartphone app.

Materials that require a lot of mixing, like straw or round-bale silage, are dropped in the tub first. A sensor on the grab detects the highest point of material within the chosen rectangle and takes the crop from there. It can grab as much as 90kg in one bite.

Once the feeder is half full with roughage the concentrates are added. Up to seven concentrates and minerals are automatically weighed and added to the mix.

According to Lely, the Vector’s loading accuracy is almost 98%. That compares well with the 90% accuracy of a conventional system, says Lely, which is often caused by the roughage part of the ration.

Too much silage dilutes the mineral portion of the diet, so if the Vector grabs too much of one ingredient then it will compensate for that in the following load.

With the concentrates in the tub, the last of the roughage is dropped in. In total it takes about 25 minutes to fill the 600kg capacity tub. For larger dairy units, two or more tubs can operate from a single feed kitchen. 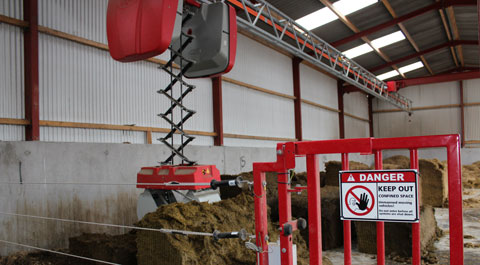 The Vector feeds little and often, something Lely says has improved feed conversion rates by as much as 5% in Dutch trials.

Any number of routes can be programmed into the system. When the tub travels from shed to shed across an open yard, it follows metal strips bolted to the floor. Top speed is a steady 2kph.

Once it reaches a shed, ultrasonic sensors mounted to its frame guide it alongside the feed barrier. These work up to 2.5m away from a barrier or wall and it can follow a curved line, too.

The farmer can set ‘virtual’ points at which the feeder starts and stops. This is particularly handy at the end of sheds or between two separate groups of cows, to stop a high-yielder nudging expensive feed to its dry-cow neighbour.

If the robot thinks it will run out of food (the tub constantly weighs itself) then it will speed up to make sure it reaches the end. Once there, the auger runs at double speed to shake off any excess feed.

During the feeding process a side-mounted sensor records the height of the feed currently at the barrier (but cleverly ignores cows’ heads to avoid getting any inaccurate readings).

When the tub returns to the feed kitchen, this information is processed and the control box decides which cows require feeding next and which ration to make up. High-yielding cows always have preference. 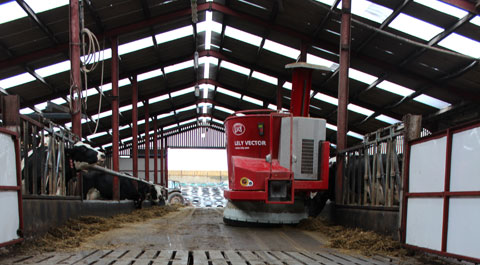 Every time the tub docks at the kitchen, it plugs into a seven-pin socket. During the filling phase it is powered by mains electricity while the four 12v batteries charge.

Electricity costs are said to be £3.36/day for a 150-cow unit. That’s considerably lower than the diesel costs associated with running a mixer wagon and telehandler.

To maximise battery life the robot needs to spend about 60% of its time charging and 40% working. This should be possible for 300 cows (the maximum recommended for one Vector system). The figure could be higher if you use the Vector to feed beef animals, where fresh weight feed intake is likely to be lower.

As with any automatically guided vehicle, safety presented Lely’s design team with something of a headache.

The feed kitchen is surrounded by an electric fence or curtain. Break the circuit and the system will stop immediately. To fill the kitchen you have to press a button to stop all actions; this will move the crane out of the way and allow access to the bays.

The tub has bumpers on all sides. If it bashes one of these, it will stop still for five seconds. If the obstacle remains, then the system will stop and text/call the farmer.

John Rafferty and his father Pat, who farm at Tullynacross Farm, Poyntzpass, Northern Ireland, are the first farm in the UK to have the Lely Vector installed

With their 40-year-old parlour due for an upgrade, they opted to install the Vector to reduce labour requirement and improve ration accuracy for their 140-cow herd. It works in conjunction with their two Lely Astronaut robotic milking machines.

“We’ve saved about 250-litres/month on diesel,” says John Rafferty. “Now all we use the tractor for is chopping straw and to keep the feed kitchen full.”

For this Mr Rafferty invested in a new Strautmann block cutter. He also erected a new shed to keep the feed in.

“We increased feed intake by 6kg per day just by keeping feed pushed up,” he says. “It leaves more time to focus on herd management and is ideal for our indoor-based system.” 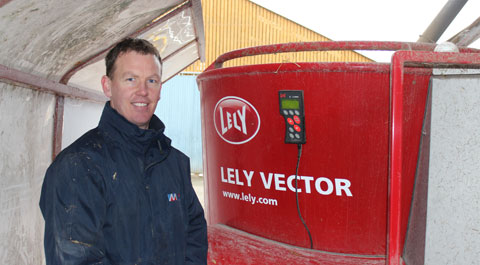