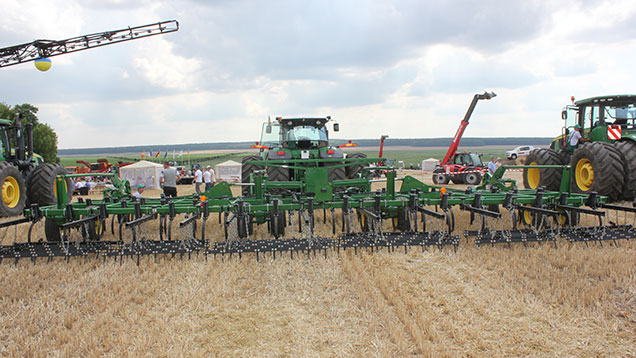 Ukraine is home to some of the world’s biggest farms, but do they have the machinery sheds to match the acreage? Ukrainian journalist Igor Pavliuk reports.

What is the average farm size?

All of Ukraine’s agricultural land belongs to the state, and large companies rent more than 80% of it. It means there are relatively few small farms – about 42,000 – given the size of the country.

The average farm is 100ha, though this is skewed by some enormous businesses spreading up to 500,000ha. Most have a cereal-dominated rotation, which means the smaller farmers are reliant on their larger neighbours for contracting services, equipment hire – particularly combines – and crop storage. Prices dip significantly around harvest time so storage capacity has a big impact on profit.

Are there many livestock farms?

There are about 5m head of cattle in Ukraine. About half of those are dairy cows, but only 500,000 are kept on farms – the others are owned by smallholders. Most families have a one acre plot on which they keep a cow and grow vegetables and fruit trees to feed the family, and even those that can afford to buy everything from supermarkets tend to grow their own.

The livestock sector hasn’t always been as small as it is now, though. Twenty five years ago there were about 26m head of cattle, but numbers tumbled when the purchase price of milk nose-dived to around the 20c/litre (16p/litre). Cows are also less productive compared with UK standards. Ukrainian cows average just 5,000-litres of milk/year, almost half that of their British equivalents.

Farmers are of the view that it’s much easier to grow arable crops and sell them directly to traders. In general, only the smallest and poorest farmers use livestock as a means of feeding their families.

See also: The challenges of no-till farming in Ukraine

What’s the typical size of a big arable farm?

At the top of the Ukrainian farming tree are those businesses that spread across 300,000ha or more. The very largest can be up to 500,000ha. However, the most efficient are between 3,000ha and 10,000ha because the managers are able to personally supervise the work.

We classify small farms as those with 1,000ha or less. These farms mainly produce cereals, though it might be more profitable to grow vegetables or add value by processing grain crops. However, market conditions usually make it easier to sell direct to grain traders.

Ukraine has half of the world’s chernozems, also known as black earth – a dark, high-humus soil that is very fertile. It’s hard to find bad soil anywhere in the country, which is why so many foreign agricultural companies are investing big bucks in Ukrainian farms.

What sort of rainfall do you get?

Ukraine is a massive country by European standards with a diverse climate. Winters are cold, while summers can be very warm and dry. Big chunks of land are covered by forests that have lots of rain, while the fertile grassland steppes are drier and often need irrigating to guarantee decent yields.

How many tractors do Ukrainian farmers buy each year?

In 2013 the new tractor market in Ukraine totalled 20,000 units and was worth €615m (£512m). However, the 2014 market will be considerably lower because of the troubles with Russia, which has seen the exchange rate has halve. It means the cost of imported machinery has soared, but the biggest farmers like the European equipment and will pay through the nose for it anyway.

What is the typical power output of tractors?

What are the most popular makes of tractor and combine harvester?

Just like the UK, John Deere has 35% of the market, but the most popular makes of tractor depend heavily on the horsepower sector. Almost all tractors up to 39hp are cheap and cheerful and made in China.

In the highest-selling horsepower sector from 79-147hp the Belarusian MTZ tractors have 42% of the market. There’s no denying their inferior quality compared with well-known European and American brands, but price is the most important thing for small- and mid-sized farmers and their all-mechanical internals also make them simpler to repair. John Deere, New Holland and Case IH are the biggest sellers above 147hp.

The combine market is more clear-cut. Small farmers try and buy higher-quality harvesting equipment or rent machines from neighbours, so western brands dominate things. In 2012 Claas had a 25% share, while New Holland and John Deere had 21% each and Case IH had 13%. There are also a few Belarusian and Russian machines kicking about including the popular Rostelmash.

What are the best-known Ukrainian makes of farm machinery?

Kharkov tractors are cheap and popular among Ukrainian and Russian farmers. They are built in Kharkiv, close to the Russian border, and are still very popular among smaller farmers. There are also companies such as Chervona Zirka that build drills and harrows, and the Kherson Combine Plant which produces harvesters and headers popular among small and large farmers alike. However, these haven’t really reached western Europe where competition is rife.

Is there much Russian-made equipment used on Ukrainian farms?

Tractors such as the Terrion and combines including the Rostelmash are common. However, farmers looking for cheap kit usually turn to Ukrainian-made equipment, so it’s rare to see Russian-made implements picked over Ukrainian equivalents.

What does diesel cost in Ukraine?

What makes of cultivator do farmers use?

Some farmers are beginning to turn to min-till and no-till to reduce fuel consumption and improve soil structure. However, a bulk of the land is still subject to deep ploughing and serious combinations of cultivation.

Many farmers use Ukranian-made cultivation equipment, but it’s not always built strongly enough to meet the needs of the farmers. Instead, buyers are slowly switching to machinery made in western countries like Lemken, Maschio, Kuhn and Horsch, but the big names carry a price premium. Smaller farmers usually have to stick with second-hand units or Ukranian-built machinery.