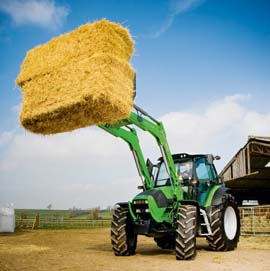 Deutz-Fahr is a dab hand at offering four-pot tractors aimed at loader work. It has several models that range from those who want their tractor compact to something with a little more grunt.

The larger of the Agrofarm models, but the most compact on test, the 110hp Profi-line model gains electronic lift controls and hydraulic proportional valves over the standard GS spec. A tight turning circle of 3.55m and a height of 2.79m on 34in wheels means it’s more than nimble enough to squeeze in and out of sheds designed for pygmy goats rather than leggy Holsteins.

The robust and pokey four-cylinder Deutz engine develops torque of 410Nm at 1800rpm and max power at 2100rpm and has no trouble coping with day-to-day tasks.

There is no shortage of gears on this little tractor. A five speed box with four ranges, three powershift gears and a clutchless powershuttle results in a total of 60 forward and 60 reverse speeds. And 15 of these fall in the key 4-15kph band – lots of choice but more frequent gear changing too.

Shuttle aggressiveness and gear change responsiveness are adjustable via a neat scroller on the lever which, if anything, is too easy to fiddle with. Another neat feature is Stop-and-Go, which allows you to drive up to a task, put your foot on the brake and not stall. So it’s more like driving a telehandler.

The cab is compact yet packs plenty in, including a multi-control armrest (on the Profi-line models). Oil flow is 60litres/min with the option to up that by 20litres/min.

The 128hp K430 is the same height as the Agrofarm with the same four-cylinder powerplant. The most obvious difference is the larger cab and different layout.

The model tested was standard spec, but it’s possible to get it in higher Profi-line spec with electronic proportional spool valves and electronic armrest control. Electronic rear lift is standard on both spec levels.

The transmission has four speeds, three powershifts, and two ranges giving 24F/8R, with a button on the stick allowing on-the-move changes. Like the Agrofarm, operators have the choice of using the clutch or this button on the gearshift. Functions like 4wd and diff are operated on the dash rather than on the armrest and there’s a speed preset button

Hydraulic controls, depth control, rate of drop, height and draft are all logically laid out with the usual Deutz-Fahr colour coding on the right hand console. The safety features, when you have got used to them, are great for preventing accidents, but will irritate new drivers.

Thanks to the mechanical spools, there was a retro-fit joystick for the Stoll FZ20 loader instead of the integrated joystick, so it was sluggish compared to the Profi-line Agrofarm.

A 40kph transmission and cab suspension are standard.

The 155hp M420 is for farmers looking for a tractor that will spend most of its time in the field, but do occasional loader duties in the yard. Like the smaller 135hp M410, this four-cylinder tractor offers performance that was only available from six-cylinder D-F models in the past. Though it measures just over 3m, it’s not as bulky as you would expect.

The M420 gets the same cab as the bigger M625 tractors and in Profi-line spec sports a multi-function armrest with the familiar chunky joystick for forward, reverse and hydraulic functions. There are also buttons for headland management activation and speed presets.

A four-range powershift with six gears and four creeper speeds adds up to 40 forward/reverse speeds. The Agrotron comes as standard with a 50kph box and front suspension. An optional front linkage will lift up to 4.5t and provide 1000rpm pto, while at the back there’s 540/540E and 1000/1000E on tap.

Under a flap on the armrest, it’s possible to programme the powershift changes, so drivers can alter how fast or slow the changes are made. A high-visibility roof, front axle suspension and cab suspension come as standard and D-F’s iMonitor screen is available.

What’s the best option for loader work? It’s horses for courses. The Agrofarm 430 is an ideal compact loader and in Profi-line spec has plenty of bells and whistles. The K430, however, offers farmers scope for tasks beyond the yard such as mowing and the odd bit of ploughing, while still being compact enough to get into buildings.

The M420 won’t be an everyday loader tractor and is more likely to be used for more field tasks and loading straw and such. Profi-line spec looks like a good choice since it gives more electronics and a multi-function armrest.