A 6m tractor-mounted version of the Contact 2000 herbicide applicator will extend the weed-wiping technique beyond grass leys and rough grazing to vegetable and arable crops, reckons manufacturer Logic.

The extra working width should also make the CTM600 attractive to contractors. 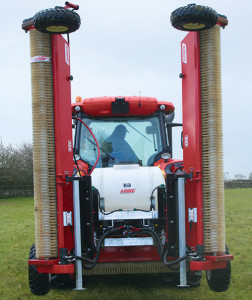 The device uses the same powered roller brush application technique as the 2.5m trailed and mounted models, which are commonly used to apply herbicide to weeds such as thistle, rush, docks, nettles and bracken.

But the ability to operate fully mounted with the wings rigid instead of on support wheels with the wing sections floating to follow ground contours makes it suitable for taking out sugar beet bolters, perennial weeds in vegetable crops and any other weeds that stands proud of a crop.

It has three hydraulically-driven roller brushes formed using a combination of absorbent and synthetic fibres to transfer a dose of chemical directly to target weeds.

The wing sections fold up and behind the central brush for transport within the width of the tractor.

A foam blob marker is standard along with a controller to regulate the amount of herbicide sprayed on to the brush according to the density of the weed population.