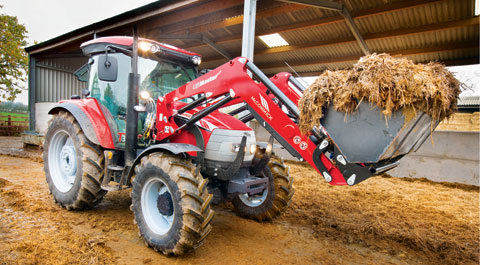 In the market for a new loader tractor? Nick Fone and David Cousins take a look a two new arrivals on the scene – McCormick’s X60.40 and Valtra’s A93.

McCormick might not be the biggest player in the tractor game but over the last 10 years the company has shifted its fair share of tractors around the 100hp mark.

And that’s mostly down to the success of its ultra-popular CX-series tractors, inherited from Case IH.

Born and bred at the now-defunct Doncaster factory, this eager little workhorse gave first Case and then McCormick a serious presence in that all-important loader-tractor market.

It’s had numerous tweaks and facelifts along the way as well as a new four-post cab just a couple of years back but until now it’s retained the same basic design.

Now though, with a new transmission and back-end, it’s had a pretty radical revamp. Enter the X60…

See more from the McCormick range

While the line-up runs from 92hp to 112hp, we tested the 110hp X60.40. Unlike the range-topping X60.50, which has an electronically controlled engine and power-boost that takes it to 121hp for pto work and transport, its Perkins power-plant uses a straightforward mechanical fuel pump – a definite plus-point in the simplicity stakes.

Rather than sticking with the straightforward gearbox of old that gave drivers the choice of 24 ratios when going either forwards or backwards, parent company Argo has opted for something less impressive from sister company Landini.

There are now 36 forward speeds but only 12 reverse. In effect there are three splits for forwards travel and none for reverse, so whether you’re in high, medium or low, when you shuttle backwards you always end up in the middle.

While this doesn’t really limit what you can do with the tractor, it’s a real irritation when you’re shunting to and fro.

In theory for some jobs it could be a plus-point. Slow speeds for maximum grunt running into the muck-heap and a more spritely pace as you back out. But in reality you’re never in the right ratio.

On the upside, there is now a simple dial on the dash to control power-shuttle and clutch aggressiveness. While there is a noticeable difference from one end of the scale to the other, on our test tractor there was still a long delay between forwards and reverse shunts, even with the dial at its most aggressive.

The X60’s four-post cab is the same as that used on CXs of the last few years and its layout is difficult to fault.

Everything is grouped where you’d expect it to be and because it’s a straightforward machine all the controls are pretty much self-explanatory.

Visibility is about as good as it gets. Hoist the loader up to full stretch and it’s all on show thanks to the big roof window.

Kitted out with McCormick’s own red-painted loader, the X60 doesn’t lack muscle on the muck-heap even with its relatively modest 60-litre/min oil pump.

But where it does come unstuck is with the total amount of oil available. It struggles to hoist a standard twin-ram 10t trailer to its upper limits – a weakness McCormick is clearly aware of as there’s an extra oil-tank on the options list. It’s well worth having.

With the X60, McCormick has stuck to what it does best. A lightweight, simple, no-frills workhorse that will do pretty much all that’s expected of it but probably won’t set the world on fire.

The Perkins power-plant is a time-proven performer and the views-aplenty cab is as good as they get. Just a shame that the new transmission isn’t a match for its predecessor.