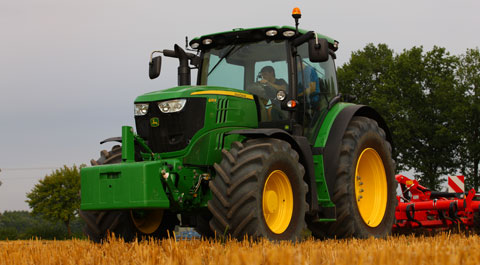 The John Deere was the only tractor on test not to use AdBlue, but it still performed well in the DLG tests. We tested a pre-production Direct Drive model, which is simple to operate but lacks a few functions.

It’s a near-vertical four-step climb up to the highest platform on test (1.53m). The four-pillar cab is one of the most spacious (1.69m x 1.57m) of the tractors on test and the steering column pivots high to make access easier. The passenger seat is comfortable and can be folded away and used as a table.

Despite the monster bonnet and low roofline the view forwards is good thanks to the high seating position. The central cab position and big fenders combine to restrict the view sidewards and the view of the linkage isn’t great either.

Power outlets are in short supply and most of them are at the bottom of the B-post, although there is plenty of space for mounting screens on the right-hand door rail.

The Deere comes with a good lighting package and at 72dBa it’s also one of the quietest on test.

Almost all the functions are controlled through the console-mounted, 18cm touchscreen Command Centre. It’s standard John Deere fare, which means it sits on a rigid platform and can only be pivoted very slightly.

It might be small, but it’s clear and there are plenty of hot keys to skip to particular homepages. Individual features can be locked with a PIN code, too.

There is no multi-function joystick, which tends to be standard on a tractor of this size, and no programmable isobus buttons on the armrest. The dashboard also lacks a digital display for forward speed and pto speed.

The steering wheel takes just three-and-a-quarter turns from lock to lock, but the 13.9m turning circle was the second worst of the test bunch.

The test tractor was fitted with front axle suspension and hydro-pneumatic cab suspension that made for comfortable road travel.

Buried under the hood is a Powertech PVX engine with a particulate filter, EGR and DOC combination. It has a boost mode, too.

Max power at the pto is 224hp, while specific consumption was measured as 244g/kWh. The SCR tractors average 235g/kWh (including AdBlue), so the Deere drinks 4% more than the average SCR tractor.

One negative in the cab is the lack of engine rpm presets – the only programmable function is a field cruise limit that adjusts the throttle travel.

Our test tractor was kitted out with Deere’s double clutch Direct Drive transmission, which has eight gears in each of the three ranges.

The first range, named ‘A’, runs to 11kph, ‘B’ goes to 20kph and ‘C’ maxs out at 50kph (provided you’ve specified it). The ranges are selected on bright orange buttons on the side console and there are 11 gears in the working range from 4-12kph.

The 6R recorded the second highest draft power on test (191hp). Interestingly, that meant Deere’s mechanical box scored lower than New Holland’s CVT. It was also neck and neck between Deere and New Holland for the most efficient use of fuel when cultivating, with the green tractor using 37.1-litres/hour.

Switching gears can be done manually by pushing or pulling the drivestick towards the plus or minus. The same goes for moving between B and C when in the BC range.

Auto mode is found my flicking the thumbstick into the right-hand notch. Here it should handle like a CVT and shift on its own within a range. The operator can set the target speed using the roller on the drivestick, which appears as red lights looped around the speedo – this is the only way of setting a cruise speed.

Overall, the drive feels like a good auto powershift. The road team found shifting on the road from B to C slightly harsh, but they liked that there’s no need to de-clutch to bring the tractor to a halt.

Adjustments can be made on the transmission homepage of the terminal. Here there’s a label-less vertical scale with the option of ‘auto’ or ‘custom’.

In custom mode the driver can choose the gear downshift point for pto and transport work. The shifting point (droop) is adjusted as a percentage of max engine rpm and for the pto is between 6% and 40% and in transport is 20%-40%.

In full auto mode the tractor will adjust these settings according to load and speed.

Other adjustable settings of the gearbox include the forward/reverse ratio from +1 to -1 and starting gear for the BC range.

As usual there are three buttons for four-wheel drive – auto (where it turns off according to speed), permanent and a brake function where 4wd is only activated during braking.

There’s no auto for the diff lock, instead there’s Deere’s button-like pedal on the floor between the brakes and clutch. If you want to programme diff lock then you must record a HMS programme.

Our tractor had Deere’s new, longer link arms and top link coupling system. In theory you should be able to hook on an implement without getting out of the cab, but in practice it’s very difficult to release the holding pin. The hydraulic top link takes up the third spool, which is irritating because the tractor only has four spools.

Lift capacity is a modest 7.9t (0.5t less than the average) and the 77cm of link arm travel is also less than average. Front linkage capacity is 4t.

In the cab a paddle on the armrest controls linkage raise/lower. There’s no neutral or stop position, but the linkage movement stops when you click the paddle in the opposite direction.

The four spools are identified by numbers and controlled by fingertip paddles, three of which are at the top of the armrest and one in no man’s land in the middle of the armrest. We liked these – one click forwards and the link arms drop or lift to the max/min height.

Our test tractor was fitted with the optional pump, which was the biggest on test and kicked out 171-litres/min, with 55-litres of oil available. On the terminal it is possible to set flow and time in both directions for each spool.

The pto clutch is on the armrest, in the shape of JD’s standard mushroom-shaped pull engagement.

Deere’s pto has the fewest programmable functions of all the tractors on test. There is no straightforward auto function and if you want to use the external pto controls you have to check a box on the terminal.