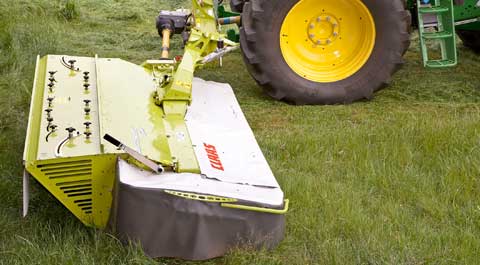 The Disco is a popular model that’s been in the German manufacturer’s line-up for several years. It has the best knife change system of all the mowers on test and swath adjustment is quick and simple.

The Disco is fitted with a category 3 linkage system that can be adjusted to suit different track widths – a useful feature for anyone sharing a mower.

Hitching and unhitching is quick and problem free, making it a good machine for more novice operators.

There’s one single-acting and one double-acting hydraulic server, as well as two cable controls in the cab, one green and one orange.

The first is used to unfold the machine, while the second is only used to detach it.

No valves need to be locked or unlocked, however you must remember to pull the orange cable to release the pressure on the cutterbar, which requires a small clamp being removed from the folding cylinder.

There is a diagram outlining the steps on the hitch. The cables are smooth to operate and the parking stand is well designed and easy to use – simply pull the knobs on the leg and it drops into place.

To unfold the mower, pull the green cable to unlock the catch and then activate the double-acting ram. The same cylinder is used for folding, and the locking catch automatically resets itself. The mower folds over-centre behind the tractor at 115 degrees, giving the driver good visibility when in transport and spreading weight almost equally between the tractor’s rear wheels.

The powertrain has a slip-clutch protection system and a transfer gearbox delivers power to the first disc. A gear assembly drives the rest of the cutterbar and three V-belts operate the conditioner.

All Disco mowers are fitted with a mechanical protection system in case the machine hits an obstacle while mowing.

At first this looks complicated, but the principle is simple: a polythene block is compressed on impact, which releases the mower and lets it break backwards. Once the machine has swung back and the obstacle is out of the way the driver must reverse in order to reset it into work position.

The swinging mechanism is angled at 15 degrees so that the mower rises upwards during break back, clearing the obstacle and making it easier to re-set.

Claas uses hydropneumatic suspension, powered by a cylinder located between the mower bed and headstock. A pressure gauge then indicates to the driver if the system contains the correct amount of pressure.

Before cutting, the driver can adjust the cutterbar’s ground pressure by activating the single-acting spool from the cab. While adjusting, you can monitor the changing pressure on the gauge and this can be tweaked while on the move. For example, if the ground conditions are wet, pressure can be increased to decrease ground pressure of the mower.

A gas-filled shock absorber positioned near the suspension hitch stabilises the cutter bar on bumpy terrain. There’s also an indicator on the mower unit to let the operator know where the tractor rear linkage should be set. According to Claas, this helps the mower follow the contours properly.

Claas’ vane adjustment system and two-swath plate is one of the best. Each part is held in place by a large thumb wheel (no tools needed) and large gaps are provided for sliding the swath doors when each has been unscrewed.

The P-CUT cutter bar has seven disc beds, each with two knives. Each disc is independently protected by a satellite gear drive that has a pre-defined shear point.

This means the whole bed is protected should one disc hit an obstruction. Each knife cuts across a width of 5.5cm and rotates through approximately 280 degrees.

The Disco’s actual cutting width is 2.9m. The oval discs can be dismantled by removing two bolts with a 5-sided Allen key and a small fin welded under the disc behind each knife makes it easier to remove accumulated material.

The Disco has the best quick-change system of all the mowers on test. A special long-handled wrench – stored handily on the chassis next to the hitch and painted red so you can spot it – allows the operator to exert light pressure under the knife, allowing it to be removed quickly.

New knives for both sides of the machine are stored in a single box in the chassis. The box is separated to make sure they don’t get muddled up.

Two ropes in the cab for folding and releasing pressure if the operator hasn’t done it via the spool valve.