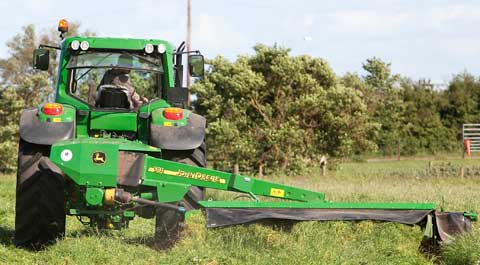 The Deere is Cat 3 linkage only and two hydraulic services are required, one single-acting and one double-acting. We put on and took off each machine five or six times, and the Deere and Kuhn were by far the quickest to get up and running.

The supporting leg is a simple frame with a stand under each axis. It can be pulled into position in a few seconds and then it’s a case of unscrewing the bars and connected rod. Unlike the other mowers on test, the pressure doesn’t have to be released.

Both folding and working heights are controlled by the double-acting spool. Once the cylinder has been activated, the mower pivots through 90 degrees and positions itself behind the tractor, parallel to the ground.

To unlock the transport position and return to working mode, the driver has to pull the cable to open the valve that controls the double acting cylinder. Rear visibility is better than with a vertically folding machine, however having the 5m mower positioned like this can cause problems when going through narrow gateways and round tight bends.

Power is transferred through two shafts and one transfer box, going directly to the first disc, then is transmitted to the other cutterbeds via gear assemblies. All discs have an overrun clutch and the top section can be changed in case of damage. The conditioner is driven by a triple belt drive.

Deere uses a non-stop protection system consisting of a single-acting cylinder and two nitrogen accumulators. When it meets an obstacle, the cutterbar tilts to 11deg backwards and lifts up. It then returns to work position automatically. A gauge lets the driver know what pressure is in the circuit, and if needs be, this can be altered with a spanner.

The 331 has a central pivot point and suspension is hydropneumatic with a nitrogen-charged single-acting cylinder. This controls ground pressure and the gauge on the arm shows the degree of pressure on the cutterbar. Pressure is then released as the cylinder retracts. Cutting height can be adjusted between 30mm and 80mm.

The conditioner can work either at 615rpm or 888rpm. To change the speed, a pulley needs to be swapped over inside the drive box located on the side of the machine.

There are six rows of eight double steel tines. These are free-swinging, which Deere says gives greater inertia and aerates the forage more. The dry matter test showed that the Deere was one of the most effective machines for conditioning, though the Kuhn achieved similar results.

Two round-headed screws need to be undone to switch from spreading to swath mode. The machine tested had a full set of vanes, however only four of them could be adjusted. Swath width can be altered between 1.2m and 2.7m.

The cutterbar is equipped with eight oval-shaped discs, each of which has two reversible knives that can pivot through 360 degrees. The top of the mower bed is flat, allowing the crop to slide over and fall into the conditioner easily. Deere uses the shallowest mower bed, measuring just 6.5cm compared with the test average of 8cm, the top of which can be taken apart with two bolts. These are recessed to withstand wear and tear.

The model we tested didn’t have a quick-change system fitted, so we had to use the 17mm long-handled wrench supplied. To remove the bolt, the blade must be positioned opposite the hole at the top of the cutter bar, however the hole is large enough for it to be a fairly quick operation.

Good on the road