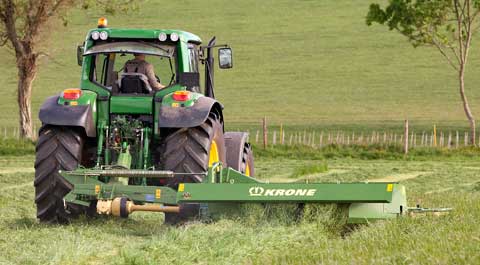 With its ease of use and range of settings, the Easy Cut has to be one of the favourites on test. First launched in 2007, the latest model shares many features from a long line of mowers, however several advanced features mean it now caters for larger operators, too.

Linkage is category 2 or 3, with the option to turn the pins round to suit the tractor’s track width. The hitch is slightly off-centre to make the hitch more secure. For folding and unfolding, a double acting service is required and for headland lift a single-acting service is needed.

As the machine is low-profile, and the parking stand is also quite short, tractor arms have to be lowered in order to hitch on. Slightly confusingly, there are two red hoses and one blue, which suggest that the two red pipes should be attached to the same spool, however this isn’t the case.

Unhitching is simpler, though, but the operator needs to remember to remove the two mechanical clamps from the main cylinder rods. Although simple in theory, sometimes in practice when you’re on your own these can fall back into place, so it’s worth having someone on hand to help if you can.

All hydraulic functions operate via a single ram, the first section of which is used for folding and the second controlling working position. There is no cable for the cab, and all operations are simple and quick to carry out. The single-acting cylinder is used for the headland position.

Power is channelled via a transfer gearbox through two shafts. Unlike other mowers on test the power doesn’t not go to the first disc, instead travelling straight behind the disc units and driving them from the back.

It couldn’t be any simpler. Krone uses a spring-loaded mechanical protection system locates under the headstock. The spring is factory pre-set to a suitable tension and when the mower hits an obstacle it tilts backwards and up. It automatically resets after passing the obstacle.

Unlike some of the other manufacturers, Krone has stuck with mechanical suspension, using two large springs holding the cutter bar. According to the German manufacturer, a spring suspension system is more sensitive, however we couldn’t test that during the review. There’s no doubt that having a mechanical system makes things a lot easier, with no pressure gauge to check or adjust.

The conditioner is driven directly off a shaft coming off the transfer box, which makes it easy to change speed without needing to dismantle any pulleys or having to swap belts. A lever on the gearbox switches from 600rpm to 900rpm in a few seconds and the speed is clearly shown.

The conditioner rotor has double tines made of steel and all are completely free-swinging, giving them better inertia, says Krone. The conditioning plate is chevron profiled, which gives the tines a rough surface to pass forage over for greater conditioning.

The Easy Cut was the only machine we tested where the conditioning strength could be infinitely adjusted via a crank on the front of the mower. The only downside is that there are no clear markings, meaning you have to judge the correct level of conditioning. It’s possible to wind it completely out if you don’t want any conditioning.

Because the ring bolts need to be completely wound out before you can adjust the doors, it’s a bit fiddly, but there are plenty of holes to choose from in order to get the correct degree of swathing. They are positioned a fair distance from the side of the machine, though.

The cutterbar on the Easy Cut has seven discs, each equipped with two knives. Drive is provided linking a large gearwheel to small pinions to drive the discs. Krone says this makes it easier to replace parts if they become damaged.

Each disc can be taken apart by undoing four bolts on the top of the disc itself. To prevent clogging, there is a small metal tongue behind each disc that acts as a scraper. Although it’s welded, it’s possible to replace this part if it becomes worn. Krone’s quick-change system comprises of a wrench that sits underneath the knife and acts as a lever. It’s quick and simple to carry out.