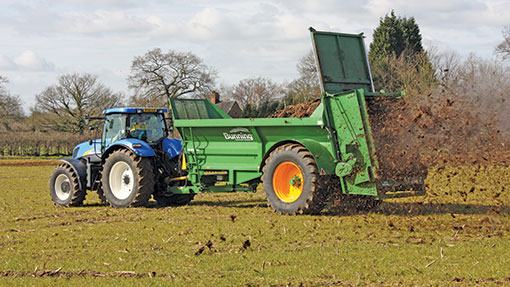 Applying organic manures using a rule-of-thumb approach is no longer good enough for growers who want to bring precision technology to the operation. Peter Hill looks at the intelligent spreading options available.

Chucking farmyard manure (FYM) on to pastures with a loose guess of target application rate may have been OK in the past, but farmers spreading chicken manure, sewage cake, compost and FYM now want greater control over the way it is applied.

The answer is “intelligent” spreading – using a manure spreader with automatic control to hit the required application rate and do so as evenly as possible regardless of changes in forward speed and other factors.

No surprise, then, that weigh cells, automatic application control, GPS location and other technology is finding its way on to the humble muckspreader.

The technology is particularly appealing to contractors, says Chris Druce of Norfolk spreader maker GT Bunning. It has adopted the Griffith Elder spreader monitor for the weighing system fitted to machines such as the Lowlander 150 Mk4.

The system comes with three levels of sophistication, starting with a basic set-up that records the weight of individual loads and tots them up to give a total. Adding a wheel magnet and sensor enables the monitor to calculate and display the application rate once the spreading width has been entered.

The operator can then adjust forward speed to maintain a consistent application rate or alter the speed of the bed conveyor if the spreader has a remote control option.

With the top-spec option, the operator simply enters the required application rate. The monitor will then automatically keep the rate consistent, within the limits of floor speed adjustment, as the spreader’s forward speed changes over undulating ground.

Bunning also offers the RDS Apollo system, which will interpret application prescription maps and record what has been spread and where. It also works in auto rate control mode if not spreading from prescription maps.

The system was developed in partnership with K-Two and is available on the company’s regular and Bio spreaders.

Using the Apollo PSi display, it collects data from load cells on the spreader axles and drawbar, and speed sensors on the beaters and floor drive motor, to regulate application to hit the target rate.

“The software includes a pre-start function that powers up the bed conveyor to move the load to the beaters so that the machine always delivers a full spread from the outset,” explains John Newcombe, OEM business manager at RDS Technology. “There is also a self-calibration function to ensure the target rate is achieved despite variations in density and characteristics of the product.”

French spreader manufacturer Rolland has two weighing and control systems. On its Rollforce spreaders, weights are measured using strain gauges on the axle and drawbar but on the Rollmax, the hydraulic axle and drawbar suspension provides the weighing method.

It forms part of the Rollcontrol system, which in addition to recording load weights via a touchscreen console, regulates application using a volume calculation based on the density of the material being applied.

“The system provides the operator with a disc speed read-out for spreading width consistency and automatically compensates for changes in forward speed,” points out Alex Clothier of Rolland Trailers. “It will also adjust the bed conveyor speed to maintain the correct feed rate to the discs if the door opening is changed.”

The “product flow” percentage referred to accounts for bed chain slippage with different materials: “It’s not a precise figure just something that comes with experience using the CCTV camera that’s focused on the front of the bed,” Mr Yardley explains. “Paper sludge pretty much moves with the conveyor so a slip factor of 5% is about right but with chicken muck you’re looking at 15-20% because the conveyor will move faster than the load it’s shifting.”

Application rate control is based on the bulk density of the material, the size of the door opening and the bed chain speed. So lowering the door a touch to ensure material does not spill out when heading up an incline triggers an increase in bed conveyor speed to maintain the correct delivery volume – the same response to the tractor going faster.

Because of this approach, the material needs to be as consistent as possible: “Biosolids are pretty consistent when they’ve slumped in a field heap for a few weeks,” says Rob Yardley.

“But even so, if the loader operator notices some inconsistency it’s easy enough to mix things up a bit.”

As for the on-board weighing system, its role is simply to record each load and provide a cumulative total, which involves releasing pressure in the self-levelling hydraulic suspension and charging it again when the spreader’s full.

“It feels a bit slow when you’re itching to get going, even if it does take only 30 seconds,” says Rob Yardley.

“But the advantage of self-levelling suspension is that the spinners stay parallel to the ground, even on side slopes, and you can adjust the working width a bit by trimming the disc angle using the hydraulic drawbar.”

Precision proves a piece of cake 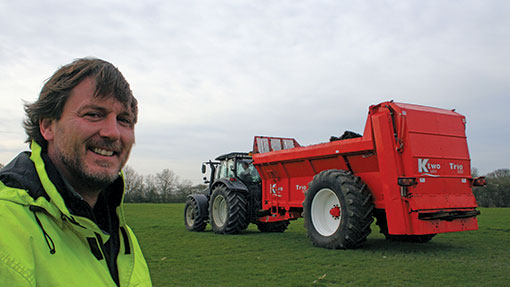 Winning the Yorkshire Water contract to recycle 350,000t of sewage cake a year has led to increased demand for the precision spreading service provided by Robinson Contract Services throughout the county.

“We’re in a predominantly arable area so there are few muckspreaders about,” notes Steve Cook at the company’s Brandesburton base north of Beverley. “But since getting a couple of spreaders to provide a sewage cake delivered-and-spread service, we’ve had farmers coming to us for poultry litter and compost, as well as traditional yard muck.”

As a result of this growing demand, Mr Cook ordered Robinson’s sixth K-Two Bio spreader a few weeks ago; the fleet already has one spreader with a simple weigh cell installation and another with the new RDS weigh and control system.

The weigh cell system was ordered to help comply with stricter legislative controls on the application of biosolids and after customers began asking for an accurate figure for the amount of FYM applied.

“The maxim ‘make the heap fit the field’ still applies to some extent for FYM because customers are keenly aware of its monetary value and generally place the correct amount in each field,” says Mr Cook. “But the RDS system was a logical addition all the same because accuracy in many aspects of farming is the way the wind’s blowing.

“Besides, the information provided by a weighing and GPS trace system adds value to the spreading operation,” he adds. “It’s especially important to growers buying in chicken litter or on straw-for-muck deals; it needs to be spread evenly to avoid striping and at an accurate rate because of the amount of nitrogen it contains.”

Most applications go on to stubbles in the backend but there is increased interest in applying biosolids to growing crops in the spring. The spreaders are capable of flinging material 24m but in practice are set up for stubble applications to deliver a 12m spread with a double overlap helping to achieve an even dressing at a consistent rate. 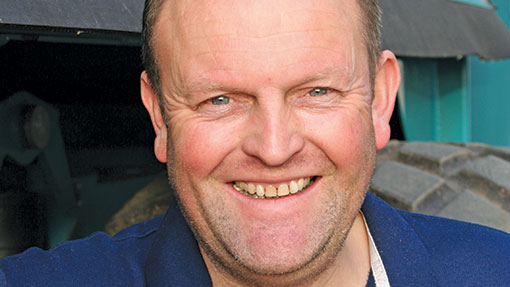 The 85ha arable unit in Shropshire farmed by Jonathan Kay has not received any mineral nitrogen for the past six years – all its nutrient needs are met from broiler chicken litter dressings sourced from a large poultry unit across the border near Crewe in Cheshire.

“We used to spend up to four weeks staying overnight carting and stockpiling chicken muck,” he recalls. “But now we bring a load back with us at the end of each day and make use of this resource on the home unit as well.”

‘Home’ is Union Bank Farm near Widnes, where biosolids are used on continuous wheat on 180ha of strong land, and a wheat, barley and oilseed rape rotation on 80ha of lighter ground.

Contract spreading was abandoned because Jonathan Kay wanted greater control of the operation to ensure spreading could take place at the right time and in the right conditions to avoid making a mess.

“You can’t hire a biospreader because most people want a regular muck machine with open beaters,” he points out. “I reckoned it was worth making an investment in the latest technology to get the best possible spreading performance.”

Rolland’s new Rollmax 7130 spreader with Rollcontrol on-board computer impressed: “I’ve never seen sludge cake spread at more than 8m but this machine will push it out to 36m, it’s unbelievable,” says Jonathan Kay. “Trim the revs back to 700rpm at the pto and it’s bang on 24m.”

Regular operator Rob Yardley, who joined Stephen Fenney as part of the arable team two years ago, explains how the weighing and control system works.

“It’s based on volume rather than weight, so to apply a given tonnage per hectare you have to use a bucket and scale to calculate the bulk density of any material and enter that figure into the control box,” he points out. “You also enter the target spreading width and tonnes per hectare application rate, a ‘product flow’ figure, the nominal bed chain speed and target working speed.”