Remember the excitement of your first tractor arriving on the farm? The unfamiliar smell of the cab (if it had one…), the sound of the engine, even the chat with the man who dropped it off?

Well, we’re giving you a chance to go down memory lane and get misty-eyed about your first tractor. What was good about it? What was disappointing? What do you miss about it?

It could be a tractor that’s still doing a job of work, or it could be one that left the farm years ago but is still etched in your memory.

Equally, it could be a tractor you loved and loathed in equal measure – the important thing is there was a bond between man and machine that the years have never wiped away. 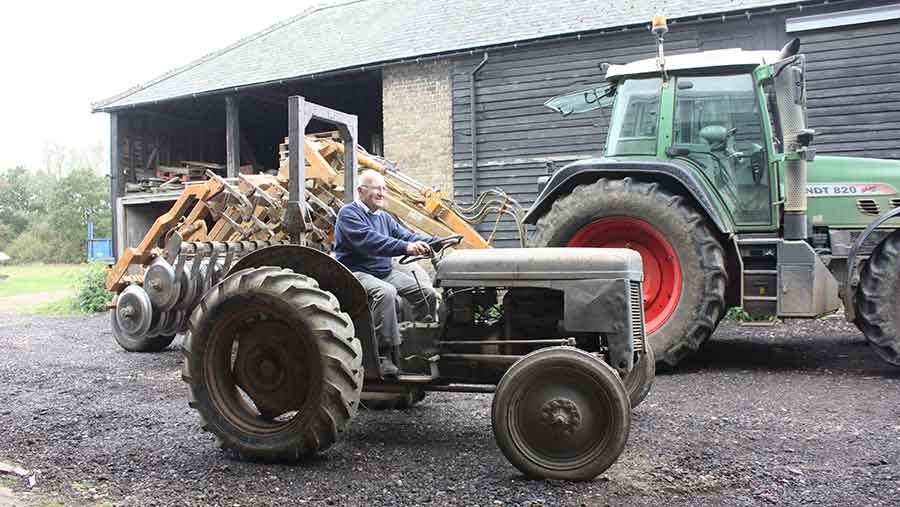 See also: A £1m vintage tractor to go under the hammer

To get you in the mood, we asked Braintree, Essex farmer John Cousins to journey back to 1949 to the day when the first new Ferguson TE-20 came to the farm.

Arrival of the TE-20

“I was 15 years old and remember waiting for the sound of the lorry to arrive from Eastern Automobiles (soon to be called Eastern Tractors).

The lorry driver showed me how to start it and I immediately put it into top gear and sped off along the farm road.”

“My father was coming along the other way and he threw up his arms in alarm and shouted: ‘Stop, you’re out of control.’”

This sudden speed was such a surprise for him, since the main tractors on the farm at that time were a standard Fordson on steel wheels and a Case DC driven by the farm foreman who had only one arm and never went faster than 4mph.”

Do you remember your first tractor? What was good about it – and what wasn’t good about it? Get in touch with us at oliver.mark@rbi.co.uk

“The Fergie was a very different kettle of fish from the Fordson and Case. It was powered by a petrol Standard Vanguard car engine. Our one cost £325 and came with a tined cultivator.”

“A year later we converted the Fergie’s engine to TVO, a simple process that just involved taking the head off, putting on three gaskets and two spacers to reduce the compression.”

“What we didn’t realise at the time was how versatile the Coventry-made Fergie was going to prove – it was a little gem. Within the first few months we bought a 3t trailer (which still sits in the shed to this day).

Because the trailer wheels were at the back, there was more downforce on the tractor and we were able to get more grip when carting sugar beet off the field – something a balanced trailer couldn’t.

“It was soon equipped with a mounted mower, weeder, subsoiler and Horndraulic  fore-end loader. It never broke down and was master of all it did.”

The main crops in those days were winter wheat, barley, sugar beet, trefoil seed, clover seed, peas and cabbage seed. But one of its toughest jobs was taking loads of sugar beet in midwinter to the beet factory seven miles away at Felsted.

We had to start off from the farm at 5.30am to get in the queue to tip the beet. The ramp was very steep and the tractor would slide in icy conditions.

One time I fell asleep in the queue and all the other lorry drivers pulled out and left me there. They couldn’t stop laughing.

Eventually, in 1962, the TE20 was joined on the farm by a MF35X, which made the old Fergie seem rather old-fashioned. The 35 was somewhat more sophisticated than the old 20, not to mention that it had a diesel engine with more power.

The Fergie still does a few jobs each year, mainly picking up branches around the fields and a bit of general carting. It’s still reliable and not much has gone wrong. Not bad for a tractor that’s been going for 68 years.