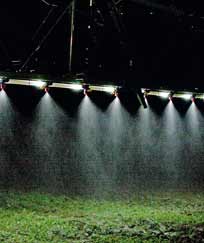 John Deere may have been the first out of the starting blocks with its e-Premium electricity-generating tractor, but a second maker is due to join them in November at the giant Agritechnica show in Hannover, Germany. The identity of the manufacturer is still secret, though unconfirmed rumours suggest it is Russian.

Whereas the Deere ePremium can produce a healthy-sounding 40kW, this 295hp diesel-electric tractor claims to be able to generate a barn-storming 170kW for powering sprayers or fertiliser spreaders.

The range of implements able to be powered by these new diesel-electric tractors was limited to just one – a Rauch fertiliser spreader. But now it’s been joined by the Amazone UX eSpray trailed sprayer which need just 24kW to power pumps, pressure regulator, mixing system and the electronics.

Another novelty on the UX eSpray is individual LED illumination of each spray nozzle. The idea is that you can keep an eye on spraying patterns when you’re working at night.

Rauch’s new Axis 50.1 W twin spinner fertiliser spreader, meanwhile, will remain pto-powered for the moment, but the maker claims this is the first spreader in the world where all other functions are operated straight from the cab via an electric cable from the ISOBUS control.