The biennial Sima show returns this February in Paris, with packed halls full of manufacturers showcasing the best new machines and cutting-edge technology.

Back in November, the Sima preview highlighted some of the latest technology to be breaking cover at the show and dished out a few medals to the most exciting bits of kit.

See also: Get a flavour of what 2017 Sima had to offer punters 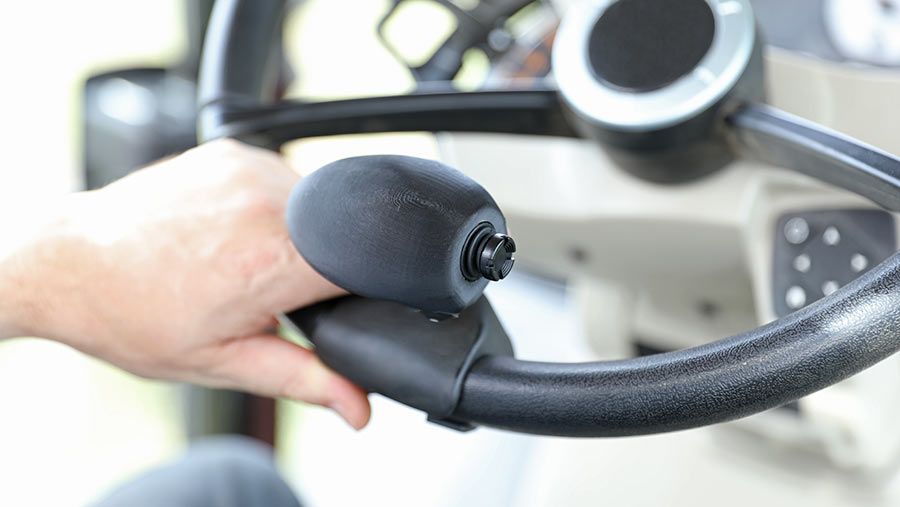 French maker MX has developed its Tract-Pilot, which is a mouse-shaped add-on that can save the continual juggling of controls when using a front-end loader.

Forward and reverse shuttle, along with gear changes for powershift machines and a neutral button to allow for extra revs to speed up loader controls, are all controlled by the three-axis micro joystick on the side of the mouse.

It acts like an old-school steering wheel spinner when turning the wheel and can be installed in a few minutes with no cables. It’s powered by a lithium battery, linking via radio waves to the electric joystick.

This should save drivers having to constantly change hand position by keeping one hand on the wheel and one on the loader. 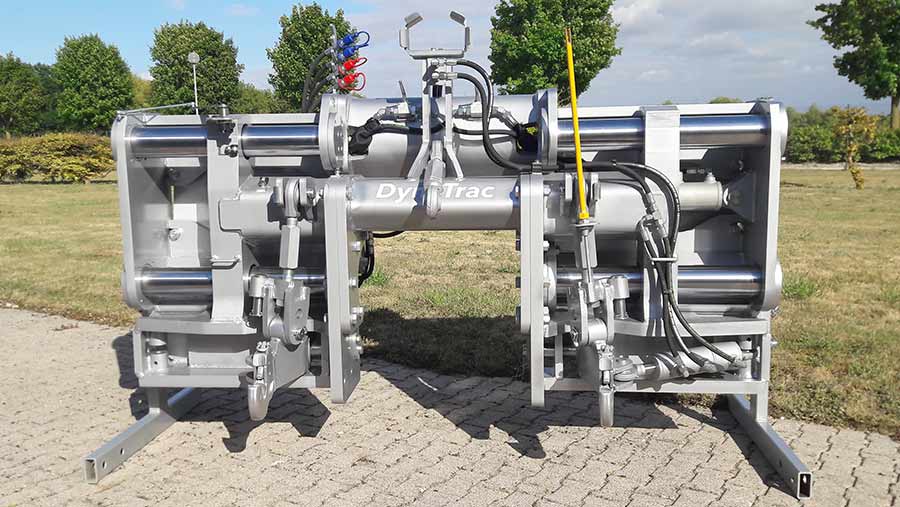 Being awarded one of only two gold medals at the Sima awards was Laforge for its DynaTrac implement pull system, which centres the implement behind the tractor rather than letting it slip off course – for instance, when on a slope.

The system attaches to the three-point linkage on the tractor and effectively detaches the implement from being rigid with the tractor. Using a couple of hydraulic rams, it can shift the whole pull line of the implement to compensate for slippage or tougher soil areas.

Heavy draft work can be difficult to keep straight, no matter how many ponies you put on the front, and this interface can be used with any implement, from tillage trains to drills.

It does require a secondary GPS dome to be added to the implement to establish what correction is needed in relation to where the tractor is running.

In recent tests, Laforge says that in a field with a 1deg slope, the implement was working to a 15cm correction error without using the implement pull technology.

Everything is controlled via GPS, rather than relying on lots of different sensors.

Currently, the toolbar is only suitable for tractors with about 200hp, but there are plans to build a 600hp model in the near future. It should be a pretty simple task as the software stays the same – it’s just the metal that needs strengthening. 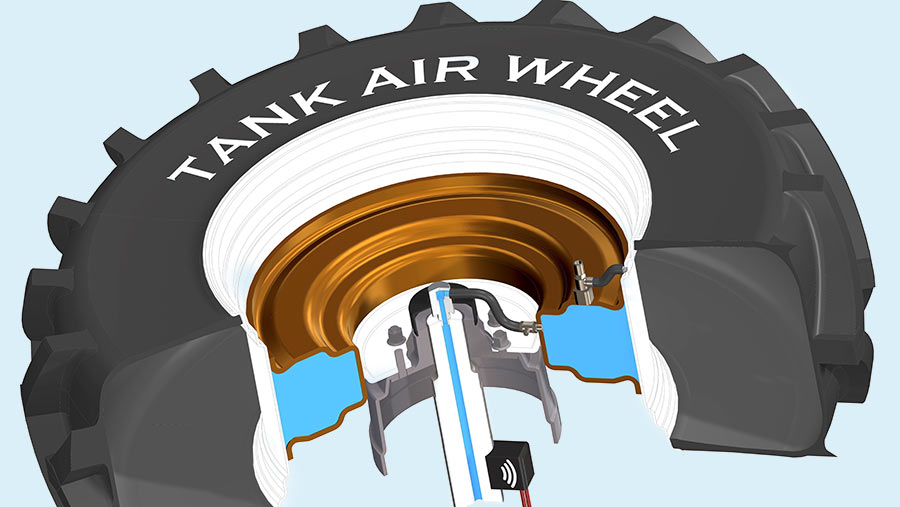 Central tyre inflation systems are now offered on lots of new bits of kit to adjust pressures for road and field work in a bid to help save tyre wear and fuel.

A nifty invention from Sodijantes Industries has integrated an air tank into the rim of the wheel, which can reduce filling times by up to 90%, we’re told.

The Tank Air Wheel is maintained at a 6bar pressure and can inflate all brands of tyre. The company says current systems on the market run from the braking compressor at low air flows or by using an external hydraulic compressor.

Not only does the tyre pressure increase quicker, but there is apparently a 20% fuel saving and the lifespan of the tyres is increased too. 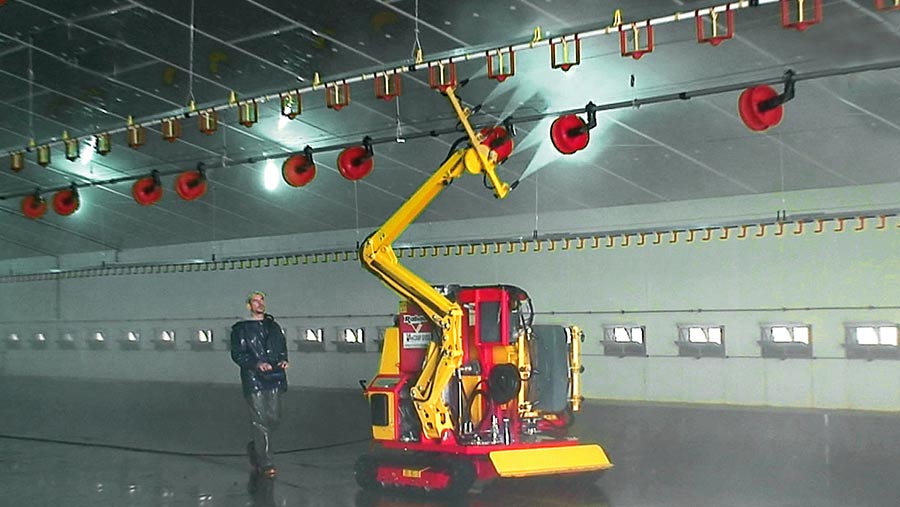 Rabaud was showing its self-propelled, high-pressure washing machine for chicken coops and poultry sheds, which should keep the operator dry and reduce the amount of water used.

The remote-controlled tracked machine is powered by a 22hp Honda engine and runs through a hydrostatic motor.

The hydraulic arm extends to 4.5m high and has a 1.2m cleaning boom on the tip, five nozzles to blast any stubborn dirt, and tilt and rotation functions, so access to awkward areas shouldn’t be an issue.

An onboard hydraulic piston pump delivers 87 litres/min at 140bar pressure, with work rates for a 1,000cu m building about three hours. There is the option to have a foam gun to apply detergent, too.

A high-pressure 100m hose feeds the arm and is hydraulically powered for rolling and unrolling, and a buzzer will alert the user when the level of water from the 1,000-litre external tank is too low.

Being remote controlled, the operator can stand a good distance away from the machine to avoid being splattered by falling dirt and water.

Kuhn has launched a new ‘My Kuhn’ platform for users to be notified of machine maintenance schedules for all its non-driven equipment.

Used through a phone, tablet or computer, the owner can select which machine they are maintaining from the menu and then hold the camera on the device up to the implement. The app will recognise the machine and indicate exactly where the grease and maintenance points are, as well as which way they face.

This may seem a bit tedious for users who know their machines back to front, but it could save time training new recruits such as harvest students or trainee workshops technicians.

There is also a spare parts service, so if the user notices something needs replacing, they can add it to the basket and see if it is in stock at a local store.