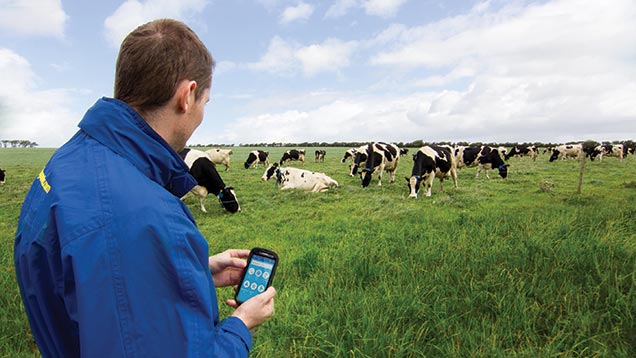 Every other year the DLG hosts Eurotier, an event dedicated to the latest trends and technology in the livestock sector.

We take a look at what debuted at this week’s event in Hannover, Germany.

See also: How tech will change the livestock sector

Research conducted by Kansas State University claims Dairymaster’s MooMonitor is the most accurate of all automated heat detection systems tested.

The next generation MooMonitor+ uses contactless technology that allows operators to simply swipe the tag with a compatible phone (pictured above) to assign a cow, rather than having to bring them in through a handling system. 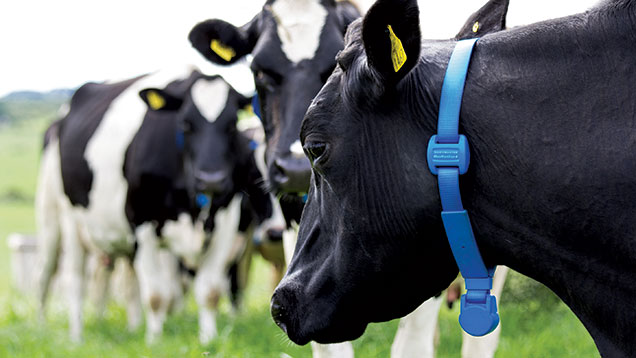 While the original MooMonitor focused solely on whether a cow was in heat or not, the latest model can now help with animal health, reducing further the revenue lost through illness and missed heats and through networking and cloud computing, the farmer can monitor the entire herd 24/7 with his phone. 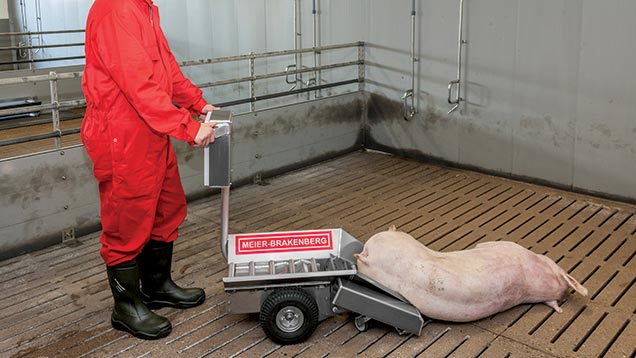 Handling dead animals is never a pleasant job, but Porky’s Pick Up makes it a whole lot easier for pig farmers.

Made by German firm Meier-Brakenberg, it has a battery-operated electric drive and roller system. The operator moves the vehicle to the dead animal, then activates the rollers to draw the body on to the platform.

Once loaded, the vehicle can turn on its axis and operates a bit like a Segway, allowing the driver to exit the pen and take the dead body to disposal. The rollers can then be reversed to unload the animal. 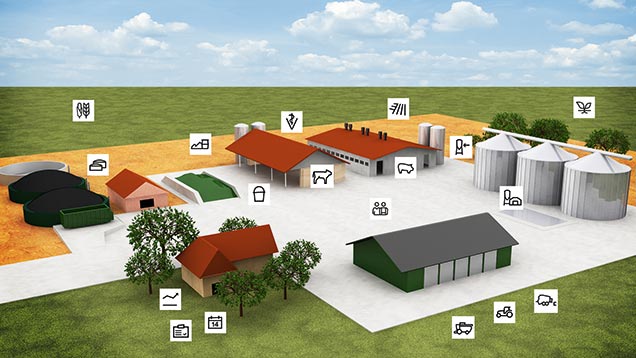 Farm software needs to be simple, accessible and include all aspects of the farming operation. GEA Farm Technologies has joined forces with independent farm management platform 365FarmNet (financed by Claas) to offer dairy farmers the ability to map, document, and control their crop and cattle farming enterprises through a single software interface.

All crop and agronomy details can be recorded, while everything related to cow management is also encompassed, including feeding milking, health and reproduction records. In addition, there’s a mobile app for remote access by the farmer or consultant. 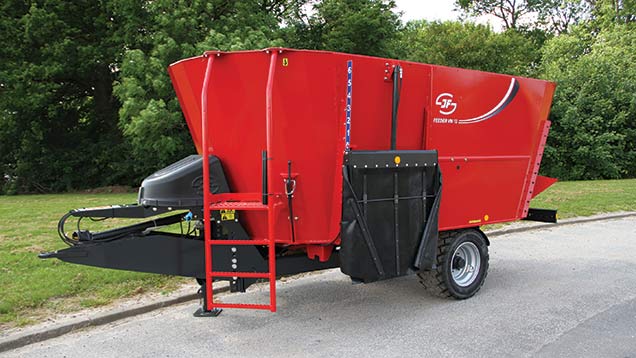 Two new models join the JF feeder wagon range. With a capacity of 12cu m, loading height is kept to a compact 2.34m for smaller telehandlers or tractors and overall width is kept to 2.21m, making each easy to manoeuvre in tight buildings.

The twin auger machines have an extra processing area where the knives meet, says Kongskilde, making them capable of shredding feed with high fibre content. Augers are made from 15mm high-strength steel, while tub sides consist of 6mm steel, and extra unloading doors in the side or back end can be added.

A wireless display in the cab means that the feeder can be loaded from all angles, minimising loading time and the feeder’s compact nature means it only requires 65hp to pull it. 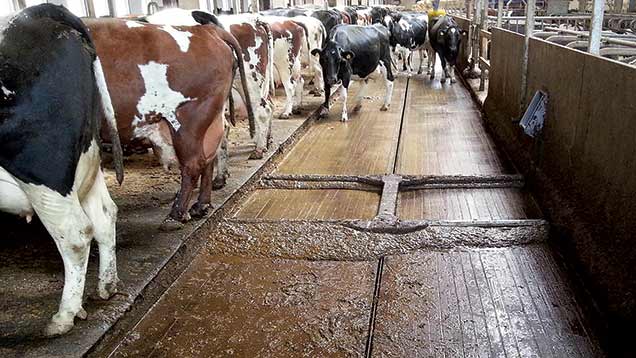 Finnish manufacturer Pellon has developed what it describes as an intelligent manure scraping system. the Manure Master uses a novel weight-based obstacle detection system which operates through the scraper bar itself, scanning in real time to react to an obstacle in just 0.2sec.

Manure or slurry load doesn’t affect movement, as this is measured continuously and scaled according to what has been collected. Varying degrees of sensitivity can be set depending on the area – for example, it can be set more sensitively in the calving area.

The system is directly driven, meaning there’s no cable drums or other turning wheels. This reduces energy requirement by as much as 80% compared with some other automated scraper systems. It can be configured to work at different times in up to 20 different alleys and can be set to automatically stop when a tractor drives into the shed for feeding. 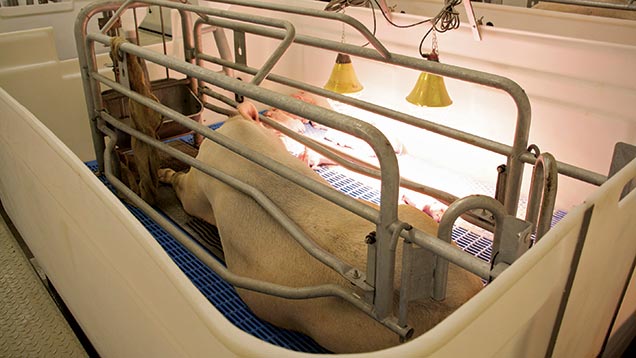 The HyCare system is an innovative pig housing system for the farrowing and piglet rearing sector, using mobile pens instead of static ones so that once a sow has farrowed, the pen environment is germ-free.

Each pen consists of a plastic tub, with liquid manure being caught by a tray underneath and piped away. Pen furniture is mounted free-standing on the base and the whole system is fixed on a transportable metal base. An automatic transport system helps the stockperson move the individual pens for disinfecting and relocating.

German company Schippers is trying to encourage farrowing to take place in a specially prepared farrowing room, with these transportable pens creating a safe and clean environment for piglet rearing. 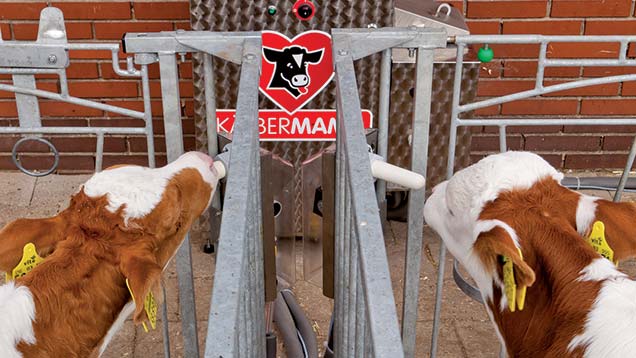 The true ad-lib feeding system supplies milk fully automatically at the optimal temperature to calves individually housed in either hutches or igloos.

This means that feeding is now automated from birth rather than at three weeks, when previous automated systems would require group management.

Calves have continuous access to feed at will thanks to a recognition system at each feeder, while the control unit now allows wireless operation of the feeder via smart phone or tablet.

Both feeding and welfare information is stored for each animal, meaning data storage now starts at the calf-rearing stage rather than later on. 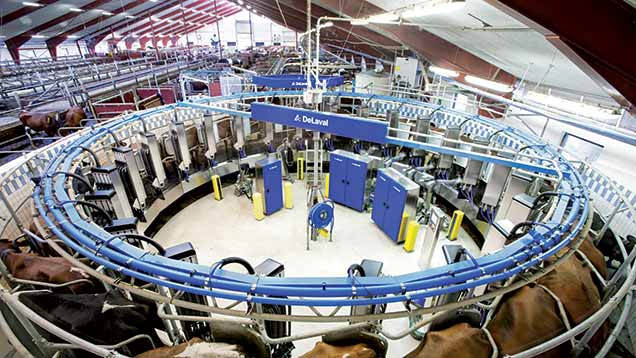 Automated feeding systems have a dedicated area at the Eurotier event, with several systems working for farmers to see.

One of these will be the DeLaval Optimat. According to the Swedish company, feeding costs represent 50% of running costs on dairy farms, while the job of feeding is the second most time-consuming job after milking.

The Optimat prepares and distributes both roughage and TMR, and can be configured to work both semi-automatically or completely automatically thanks to its modular make-up. The robotic system ensures there is always fresh food in front of cows and can be controlled via the company’s DelPro herd management system.

DeLaval launched the first robotic rotary parlour at a test farm facility in Sweden in 2011, but it’s not until fairly recently that sales have taken off.

The system itself can be configured to work in free stalls, loose housing and pasture-based methods and suits herds of 300 plus, on both voluntary or batch automated milking systems. DeLaval claims it’s the only system to encompass both.

The first commercial systems were installed in Australia in 2011 and Germany in 2013. As of the beginning of next year, there will be 10 systems up and running in four countries. 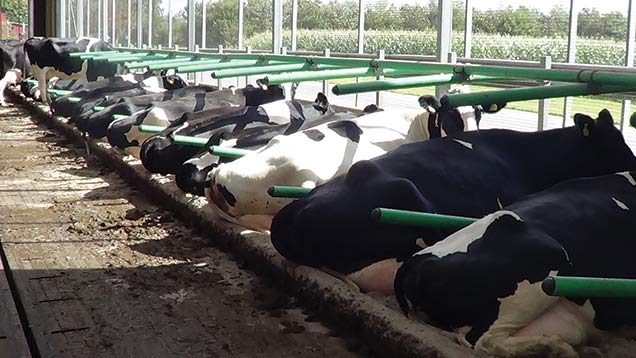 This has in turn positively affected calving intervals thanks to animals being in better health.

The Green Stall Easy comprises a lower flexible plastic tube that guides the cow when it lies down.

At the same time, the inclined angle of the tube gives the cow more headroom so it has plenty of space to lie in the right position. An upper right plastic tube helps guide the cow when it rises or lies down and prevents it from turning round.

A neckrail, also made from plastic material, gives the cow a flexible resting solution, says the company.

The system can be altered easily depending on the size and characteristics of the herd, and there are also flexible feeding rail systems available.