New kit from gate locks to drain flushers and trailers to telehandlers will be exhibited at the Midlands Machinery Show, which takes place on 22 and 23 November at Newark Showground in Nottinghamshire. We’ve picked out 11 must-see items at this year’s event.

Farmers prepared to tackle field drainage issues themselves are being catered for by a larger tractor-mounted trench excavating machine from AF Trenchers.

The AFT250 is fitted with a fixed-angle digging boom and self-adjusting spoil augers, and can dig trenches up to 400mm wide to a depth of more than 1.6m. 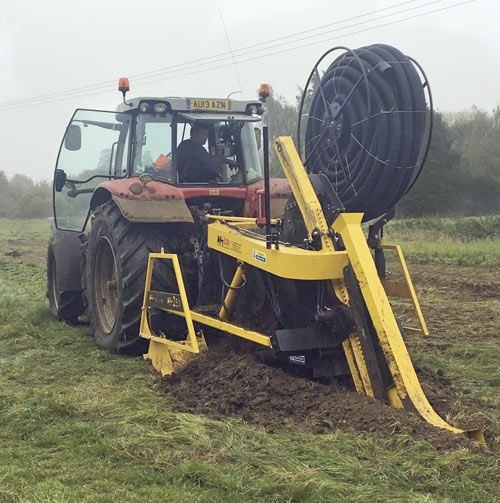 Agri-Linc, a first-time exhibitor at the Midlands Machinery Show, is launching a range of small three-way tipping trailers from Portuguese manufacturer Herculano.

The 3t, 4.25t and 5t single-axle trailers come with a drawbar jack, safety markings and lights, hydraulic brakes, and a steel body with corrugated sides. By releasing latches appropriately, the body can be tipped to the rear or to either side almost vertically.

A ladder frame at the front and open-topped hollow posts that accept extensions are among the features, together with a top- or bottom-hinged tailgate on the 5t version. 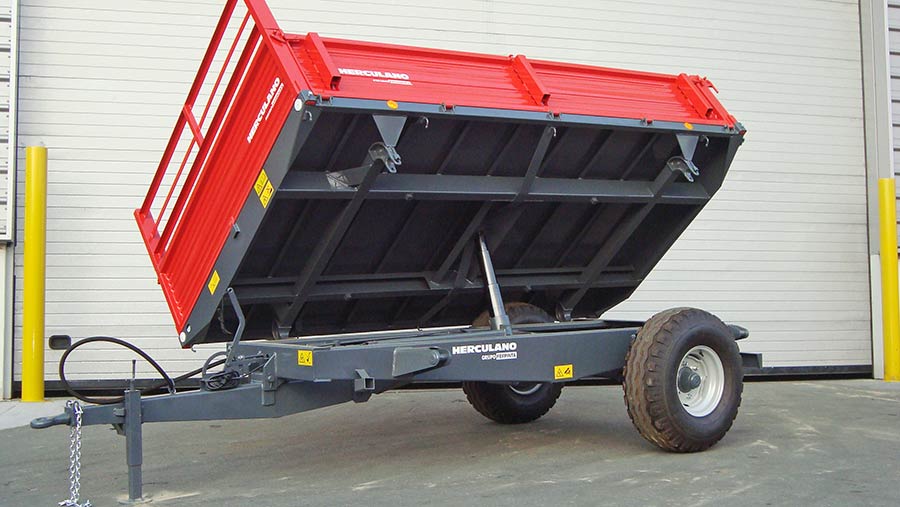 A new dealer on the agricultural machinery scene – Agriscope at Everton, near Doncaster, South Yorkshire – is exhibiting one of the latest additions to the Merlo telescopic handler range.

The TurboFarmer II TF42.7CS CVTronic is rated at 4.2t lift capacity, with the ability to take 3.5t to the full 7.1m lift height.

A Deutz engine of 156hp output makes this one of the most powerful telehandlers around and it also comes with cab suspension that remains a unique feature of the TurboFarmer II.

The hydro-pneumatic suspension can be engaged whenever the operator wants extra comfort over that provided by the air suspension seat. Optional boom suspension is also available to smooth out any jarring movements as the machine passes over rough ground.

Merlo’s fully hydrostatic CVTronic transmission uses two hydrostatic motors at low speed to deliver maximum torque for clamp climbing or to shove a bucket or fork into a pile, but just one motor operates when faster speeds up to 40kph are required. 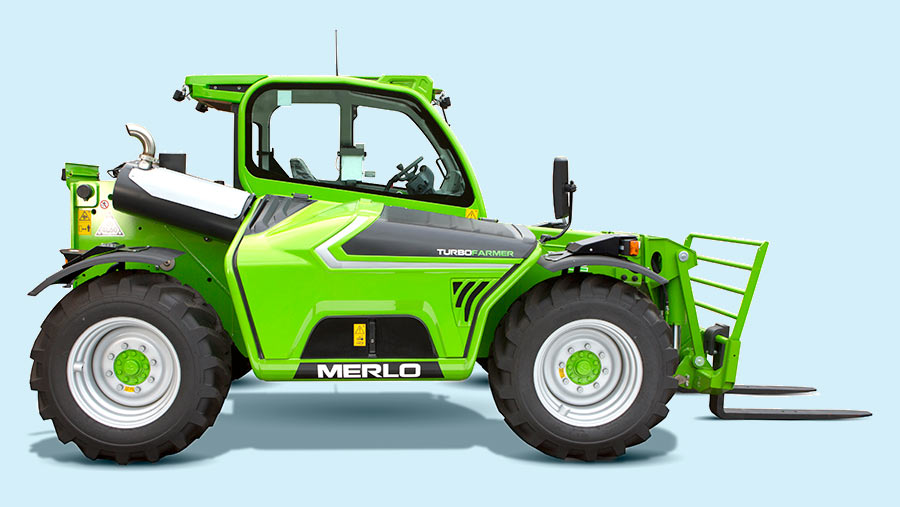 It is one of a range that extends from 8-24cu m capacity using heavy-duty construction and a fully galvanised finish to ward off corrosion, plus a 10-stud axle with hydraulic brakes.

Pichon claims its beaters are the largest available at 1,035mm diameter, and they are fed by 70mm removable slats on 16mm bed chains.

Given the range of different organic manures available to growers, the rear door option enables the spreader to handle all materials, says Chandlers, from light chicken muck to dense yard manure.

The doors open and close using a spool valve on the tractor so they can remain in place regardless of whether compost, digestate cake, lime or gypsum is being spread in swaths up to 20m wide. 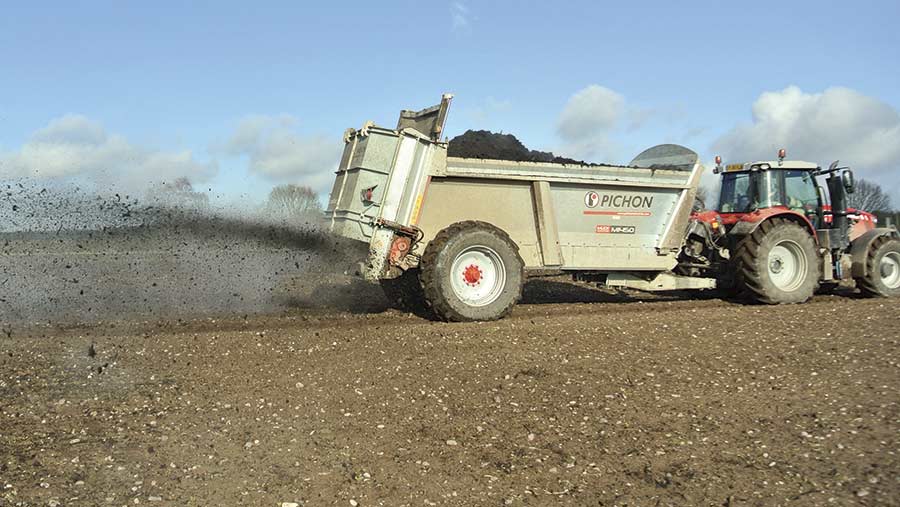 A 6m version of the new TerraBlade inter-row hoe will be shown by Claydon as a means of tackling weeds difficult to control with herbicides in band-sown combinable crops.

A Category 3 front linkage carries the tool at a typical working speed of 6kph with manual steering, working up to 30mm deep with an output of up to 30ha a day possible, or it can be rear-mounted with RTK guidance to provide accurate steering control.

A combination of mechanical and chemical weed control as part of a stubble management strategy can achieve high levels of control of challenging weeds such as blackgrass, according to Agrii trials. 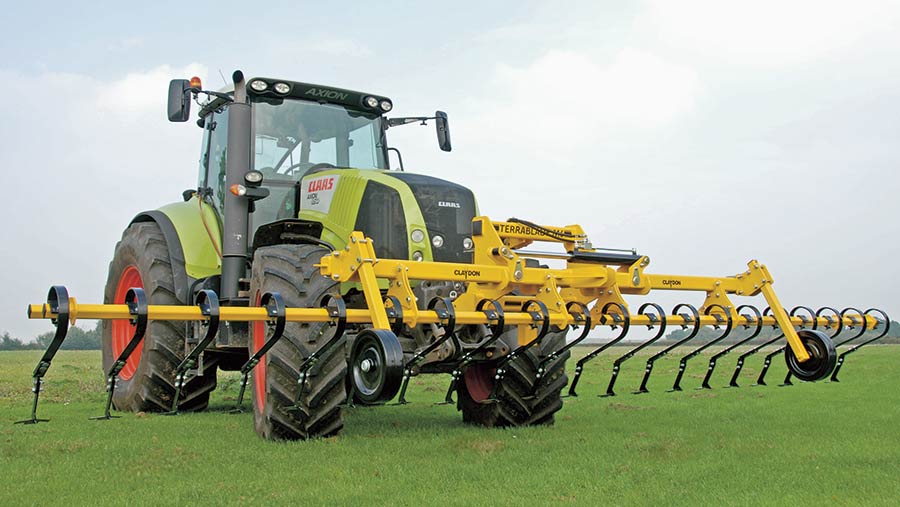 A new generation of KRM Bogballe fertiliser spreaders features a redesigned chassis with angled surfaces, pivoting guards and 18 access ports to all parts of the frame and spreading mechanism to enable thorough cleaning.

Load capacity is increased by up to 20% as well on the three models.

Added versatility for the M-Line machines is provided by the five settings for the flow regulating mechanism to encompass broadcasting small seeds for cover crops, applying slug pellets and regular fertilisers up to high rates, and spreading pelleted bio-fertilisers using a new “max” setting.

Also, the section control system that uses satellite navigation to automatically regulate the spreading width in short-work and the like has been enhanced to provide eight main sections and five sub-sections – 40 in all – to effectively create stepless width adjustment.

When using variable rate application maps, KRM says this function will also match rates to left or right for optimum use of nutrients without waste. 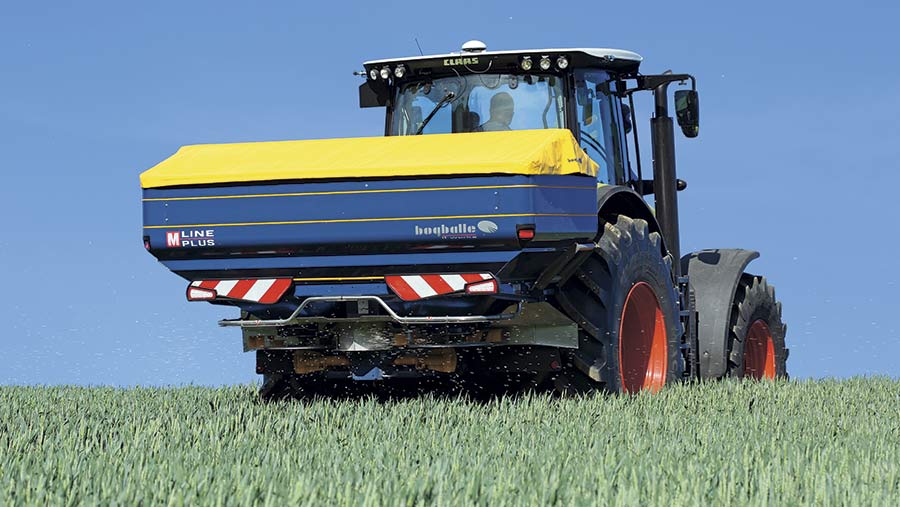 Automated drain jetting using a hand-held wireless remote control is the latest feature on the SS Engineering jetters being shown by Mitchell-Rowlands.

It brings programmable control to the land drain flushing operation, including automatic reeling in when the set length has been reached to bring out soil and root debris, and automatic reverse and advance when the jetting head meets an obstacle and must retreat a distance before trying again.

The latter process is automatically repeated until the jetter breaks through and avoids slippage and consequent drive wheel and hose wear when maximum grip pressure is applied.

Once the electronic counter has reached the pre-set drain length, the reel reverses to rewind the hose automatically at a constant speed with the reverse jet head bringing out any debris in the process. 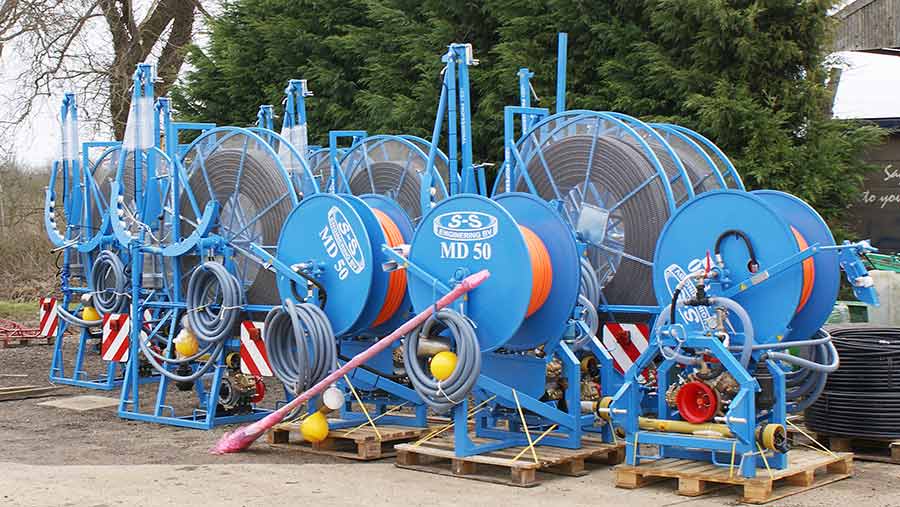 The AcrePlus range of subsoiler and cultivator wearing parts will be shown at the Midlands event for the first time by Spaldings.

Designed to fit a number of existing implements, the parts from Milson Foundry in New Zealand are made from a recipe of materials formulated and then heat treated to provide high-wear resistance without being brittle.

But this special steel can still be welded, so it is attached to the surface of a base material that absorbs impact shocks and minimises point breakages.

It is applied on the leading edges of points and wings to help keep their shape and lift characteristics, with tungsten technology used selectively in the form of relatively small tiles brazed into positions where the wear pressure is greatest. 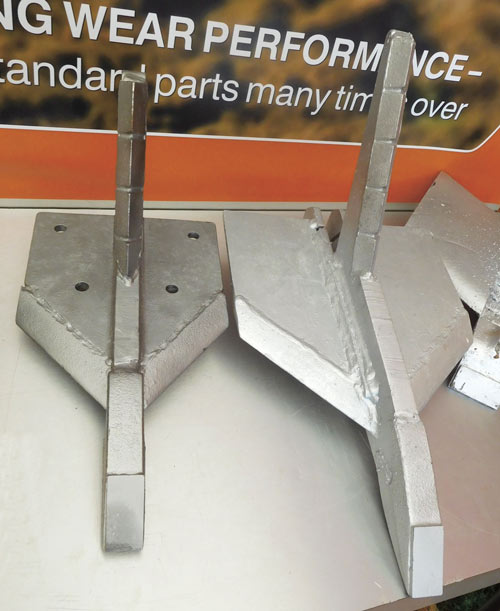 The SmartTouch armrest will be one focus of attention on fourth-generation Valtra N and T Series tractors with Versu powershift and Direct stepless transmissions.

A touchscreen display, button control pad and multi-function drive lever are incorporated with an armrest on the seat-mounted console to cover all functions other than driver’s seat adjustments and the air conditioning.

The display design means only two swipes or taps are needed at most to access functions and Valtra promises that it is impossible to become lost in the menu.

The 9in touchscreen can be used to customise tractor controls, set-up the U-Pilot headland management and Auto-Guide satellite steering and other precision farming options. 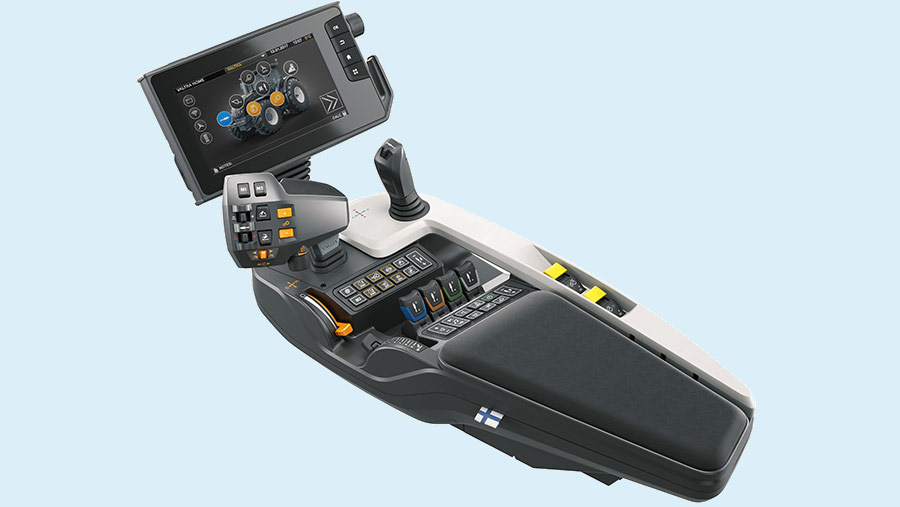 Next generation gate locks will be previewed by Zedlock at the show, featuring an interchangeable Euro Cylinder lock mechanism and upgrades over the original including a stainless steel sliding bolt with 70mm of “throw” and a heavy duty aluminium alloy case.

Options include a keyed-alike system for multiple users on a large farm or estate, or a high security anti-drill cylinder for a yard or compound gate.

Issuing restricted keys registration to temporary users – a contractor, for example – is another option and users can change the cylinder to a different system without having to remove the lock.

The Zedlock is compatible with most farm gates, including Bateman and IAE, and is supplied with fittings, a template and hole cutter. 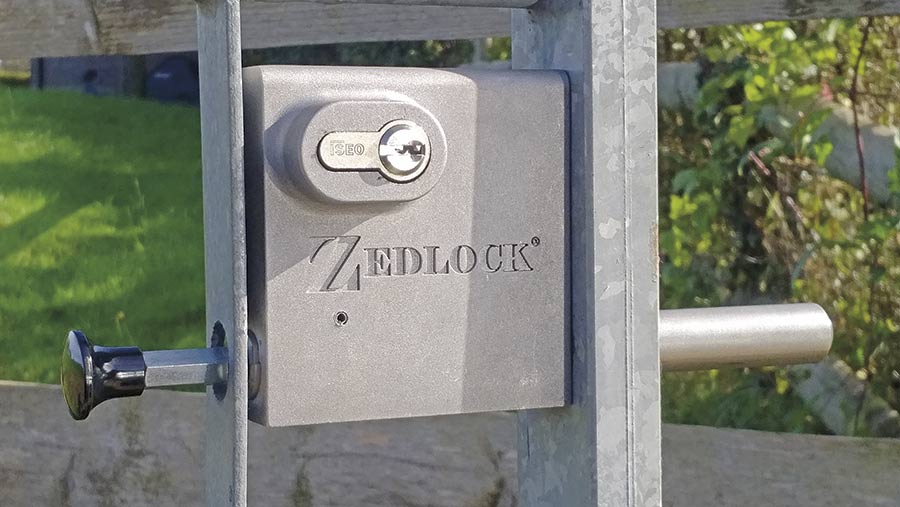 Three-way screener is light on its feet

The three-way screener from Red Rhino Crushers is light enough to be transported on a trailer behind a 4×4 or pick-up.

A tracked chassis with remote control moves the crusher on-site and on to its transport, and a 25hp diesel engine powers the transmission and trio of screens.

These can be of various sizes to suit the material being sorted and to sift out oversize and undersize contamination to create useable finished products.

The machine can be fed by an excavator or from the conveyor on a crusher, and the longest two of the stockpiling conveyors fold hydraulically. 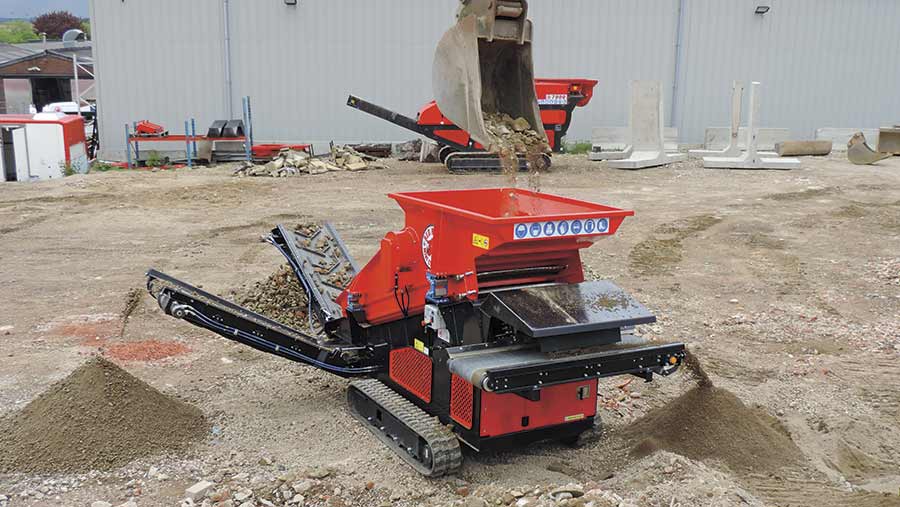