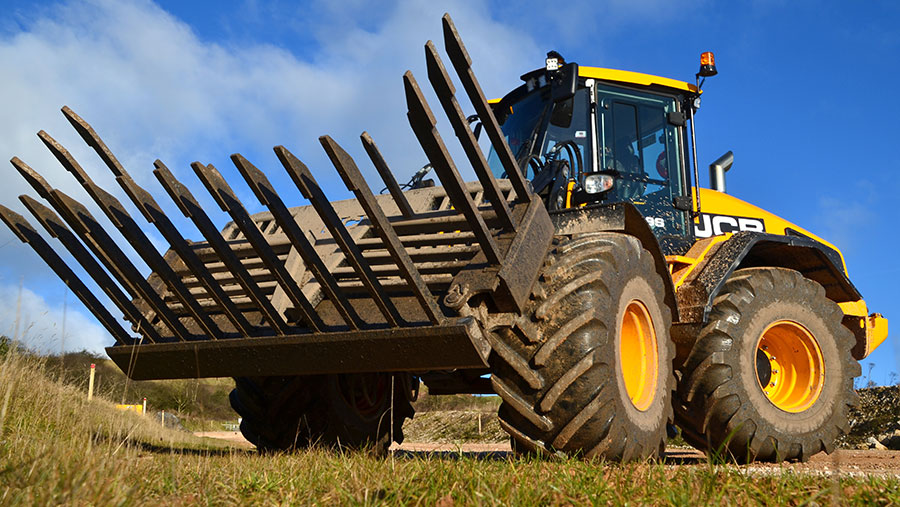 As the main middleweight model in the company’s ag-spec wheeled loader line-up, it replaces the outgoing 418S – a bestseller among the farming community both in the UK and on the other side of the Irish Sea.

Generally bringing extra muscle and capacity, the “S” designation slots the new model in between the heavyweight 435S and the smaller 413S.

With an effective payload of about 4t (depending on what’s hitched on the front), it’s bound to follow its predecessor’s form as a firm contractor favourite with a 3.6m (12ft) buckrake on the silage clamp.

Employing the same 6.7-litre Cummins block, it’s now capable of pumping out a maximum of 841Nm of torque, compared with 801Nm previously – that should all help in making it hang on in there longer on long, steep clamp climbs.

AdBlue is injected into the exhaust to meet emissions regs at a rate of about 3% of diesel usage, making refills necessary with every third refueling.

Physically the machine has changed quite a bit. To help with the increase in size of buckets and buckrakes, the design team have worked to shift the bias of weight distribution from the front section of the chassis to the rear.

The tail is now stretched by 300mm (12in) to aid in counter-balancing and maintain traction to all four wheels even when there’s a big load on the nose.

Borrowed from bigger shovels in the JCB range, the new cab is a massive improvement on what has gone before. It’s a big airy space with vast expanses of uninterrupted glass thanks to no cross-members disrupting the front screen.

There’s now a decent amount of room behind the seat so legroom is no longer an issue. Being able to ram the throne right back has a downside, however.

Although it might be a more comfortable driving position, you have to lift yourself right up in the seat and crane your neck forwards to see right down to the attachment carriage when hitching up a bucket or forks. Other than that, the views are excellent, especially out and down to the areas forward of the front wheels. 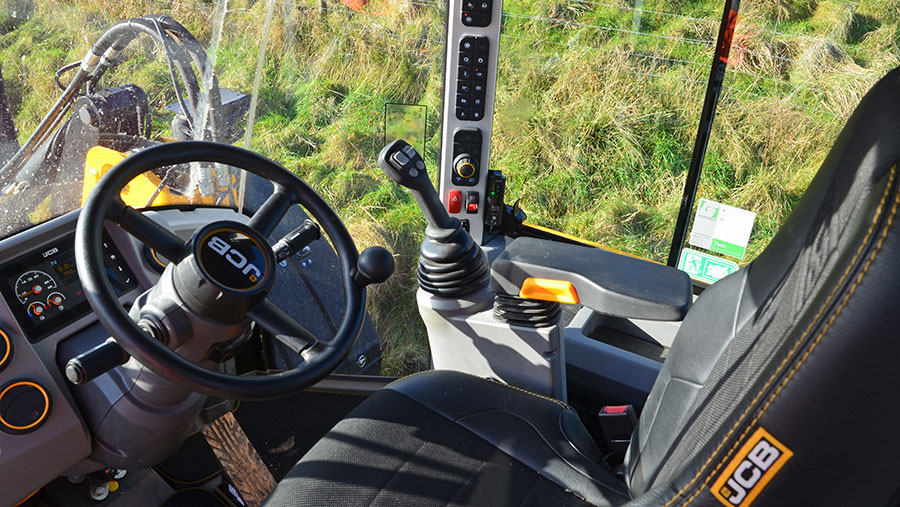 But what really strikes you about this high-tech cockpit is the absence of noise – it’s so much quieter that you wonder if there’s something missing.

In fact, if you’ve been used to driving an older version it’ll take quite a bit of getting used to, trying to fathom out exactly what the engine’s up to – you initially feel quite detached.

But that’s soon forgotten as you begin to enjoy the fact you’re not going to feel like you’ve spent 12 hours next to the speakers at a thrash metal concert after a long day in the saddle.

It also feels pretty uncluttered thanks to all the main electronics being grouped in banks of blister buttons on the right-hand A-pillar.

Up in the roofline there’s an ultra-clear colour monitor that constantly displays a feed from the rear-view camera. It’s a split-screen arrangement that also handles a few other machine settings, including third-service flow rates, reverse-fan intervals and when the boom suspension kicks in.

These are selected using a BMW iDrive-style click-clack dial, which can also be used to bring up a basic operator’s handbook and an explanation of what each of the blister button icons means.

A nice feature is the way that as the shuttle is knocked into reverse, the monitor automatically switches to a full widescreen view of what’s behind.

This cabin really feels like it has been designed by someone that’s spent plenty of time in the driving seat.

Along the right-hand windowsill there are three rubber-lined trays of different depths that would suit coffee cups, phones and lunchboxes. Alongside one is a 12V power point, jack plug and USB connection plumbed direct into the Bluetooth stereo.

It might not be the right time of year to put any shovel through its paces in the job that it’s most likely to clock most of its hours doing, but at JCB HQ there’s a rubber chip clamp that provides a pretty good simulation of silage duties. 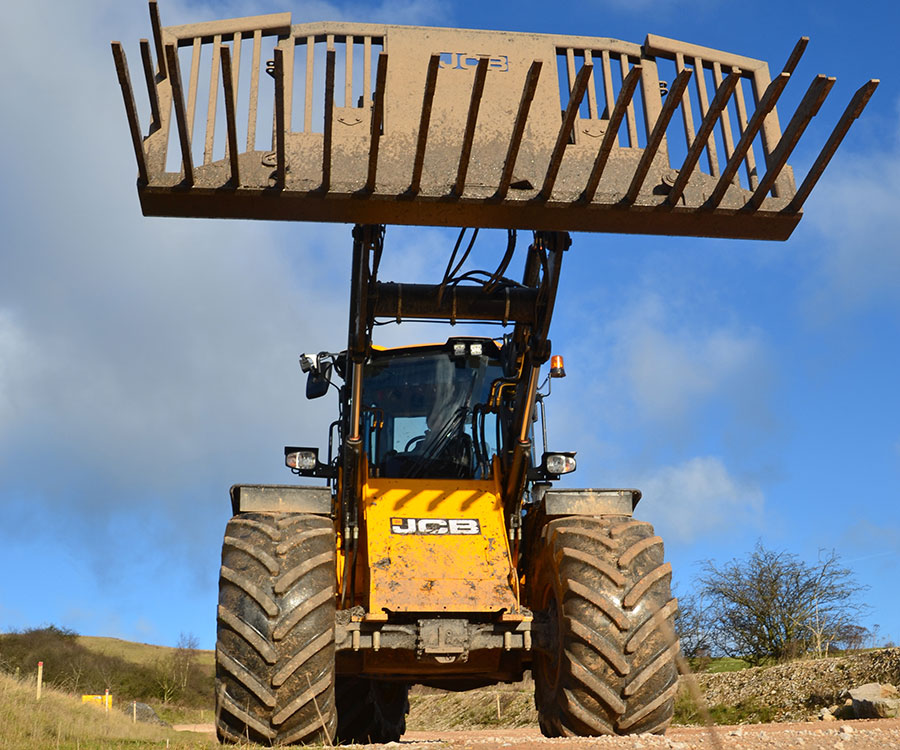 The 419S certainly doesn’t lack any pushing power or traction, easily taking a full 3.6m fork-load with it in one swipe. With torque-converter lock-up in all six powershift steps there’s no longer that sluggish delay that’s usually accompanied by lots of revs to get it moving.

However, when you’re rolling right to the edges of the pit you might want to de-activate it just to avoid any nasty surprises with it kicking in just as you reach the brink.

While it’s fine for most of the clamp work, if you’ve been used to using JCB’s flagship 435S with its 264-litre/min set-up you’ve probably been a bit spoilt.

With the 419S you’ve got to work a bit harder using more right boot to get enough oil flow to get a decent bit of fork-flick while gently raising the loader jib as you progress up the clamp.

With its new whisper-quiet cab and redesigned chassis, the 419S is a more operator-friendly, capable performer than its predecessor. Being able to fit fat-boy rubber means it’ll also tread more daintily.

Weighing in 700kg heavier than before, it’s clearly put on a few pounds in the run up to Christmas, putting it much closer to its big brother on paper.

But let’s be clear here, with a 60hp deficit and a significantly less lively hydraulic package, this is no rival to the 435S. And that’s reflected in the price – it comes in £26,604 cheaper than the flagship that JCB tags The King of the Clamp.