With the £3,300 hardtop and garish savannah yellow paint extras removed, the Navara slots in around mid-table when compared with the rest of the candidates.

The engine is strong enough and the spec is good, but it’s hard not to be disappointed with the manual gearbox and cramped-feeling interior. 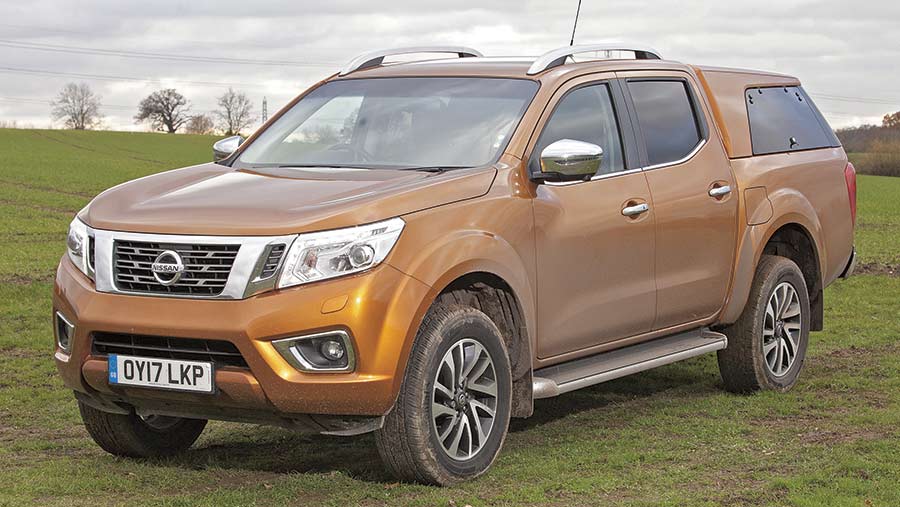 The most recent Navara facelift saw a 2.3-litre engine fill the hole of the old 2.5er.

The bigger of the two models (160hp v 190hp) gets an extra turbo and is pokey enough, but dishes out its maximum power at a slightly strained 3,750rpm, so it has to be worked hard to get the best out of it.

The 450Nm of torque puts it middle of the road and comes at just 1,500rpm, which is pretty similar to the bigger blocks of both the Amarok and Ranger and means it pulls hard at low revs.

It will get to 62mph in 10.8secs – about the same as most of its rivals – and claims a stonking combined consumption of 44.8mpg.

However, it flattered to deceive and we only managed a fraction of that on our test route – 31.16mpg – which left it in second place but miles from the rather audacious-looking spec sheet promises. 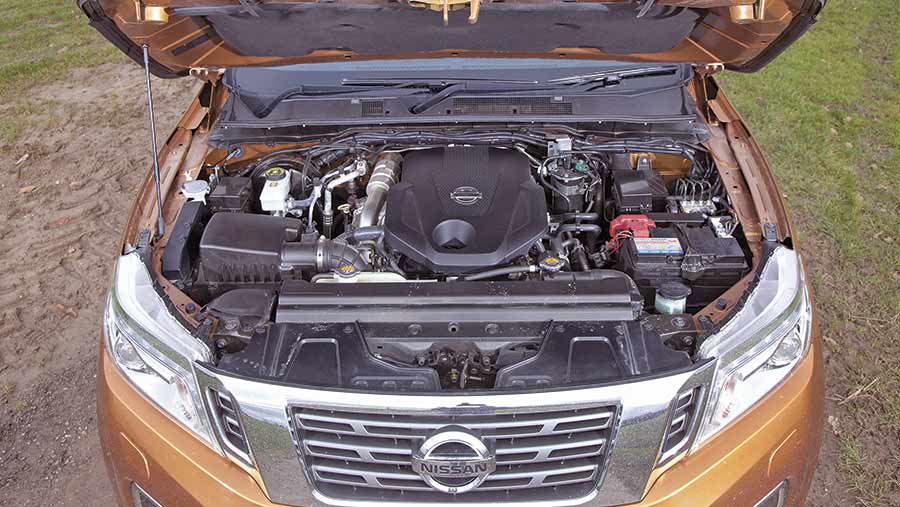 On the plus side, its 167g/km carbon emissions make it pretty climate friendly and it also goes about its endeavours relatively quietly, particularly once it has settled at a steady pace.

Although Nissan no longer offers a V6-powered model, that could be about to change.

The company has agreed a deal with Mercedes-Benz that will see the Germans use the Navara platform for its new X-Class pickups and it intends to launch a V6 version – a move that could benefit Nissan buyers in the future.

Unfortunately, our test truck arrived with a six-gear manual transmission, which was a real let-down.

It can’t be compared to the auto boxes of the rest, but the baseball-bat-in-a-barrel-of-coconuts feel caused by the long throw and sloppy gates would be a disappointment to anyone shelling out the thick end of £30k.

The company does offer an auto-shifting seven-cogger, but it wasn’t supplied for the test.

The exterior dimensions are big, but the bulbous dash area, low ceiling and small windows make the inside feel dingy and too cosy.

It doesn’t help that the front windscreen is heavily raked and the bonnet has Batmobile-style bulges either side that make the views out pretty poor compared with the likes of the D-Max. 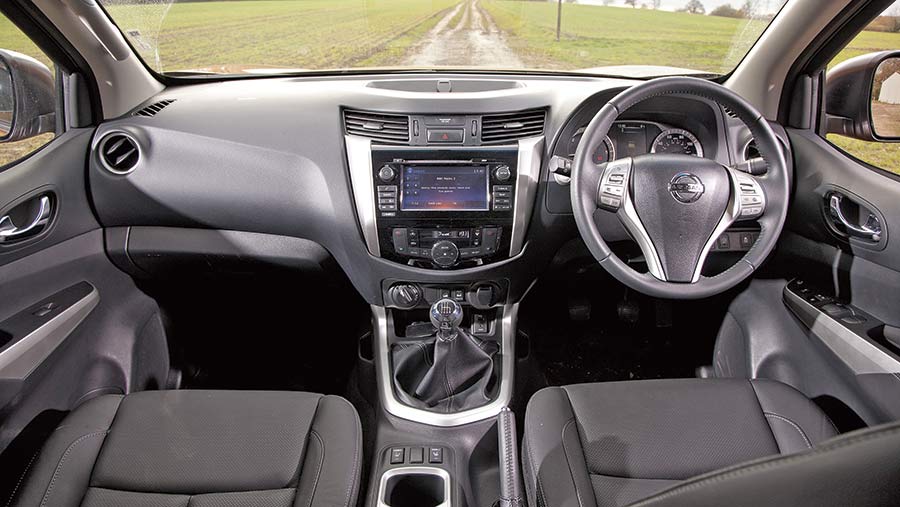 Material choices are decent, with leather wrapping around a smallish steering wheel – not helpful when the steering is pretty heavy – as well as the gear knob and handbrake.

There are also a handful of 12v power sockets and a crisp, clear 7in screen that was ranked second only to the Ranger.

Its party piece is the pop-up 360deg view provided by front and rear cameras and super-wide-angle lenses tucked underneath the wing mirrors on either side.

Add to the package keyless start, heated door mirrors, 18in alloys (if that’s your type of thing) and a few USB charging ports and – like the Ranger – the Navara begins to look fairly enticing.

Passengers (particularly those in the back) are less likely to warm to its virtues, though – the rear seats are low and quite cramped, leaving occupiers assuming a tuck position with their knees up around their ears.

The as-tested price is far less nasty once the Truckman hardtop with lockable windows – a £3,300 indulgence – is removed.

Of particular interest is the new five-link suspension arrangement with coil springs at the back, which replaced the old-hat leaf set-up still employed by all of the others contenders.

It does a sterling job of ironing out the worst of farm track potholes, particularly at higher speeds, but it sits on a standard ladder chassis, so still suffers from a jittery tail on the road without any weight in the back.

It will also tow 3.5t and has a respectable payload limit, while C-channel tie-down points are as good as it gets for strapping down loads on modern pickups. 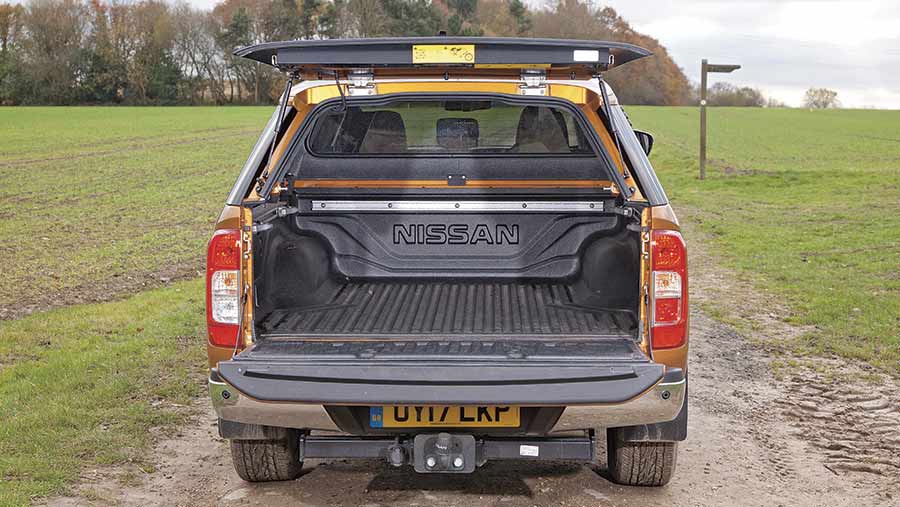 Despite its canal boat reputation, the Navara wasn’t actually the longest pickup – the Ranger took that particular prize – and its 12.4m turning circle wasn’t the worst, either.

The popular Navara comes with six spec options, starting at the entry level Visia from £24,825 (inc VAT) for a six-speed manual version with the smaller 2.3-litre dci with 160hp.

The Acenta+, N-Connecta and Tekna all have the more powerful 190hp 2.3-litre engine and the option to change the manual six-speeder to a seven-speed auto box, while toys such as dual-zone climate control and a rear colour camera are now standard fodder.

Nissan build a flashy top speccer, which has limited appeal for any kind of serious work, but is great for showing off in the showground car park.

The Trek-1deg doesn’t come with a huge number of extra toys and uses the same engine as the Tekna, but some helpful Trek-1deg stickers, bigger 18in alloys and roof-mounted LED lights will constantly remind you of what you paid the best part of £3,000 extra for.