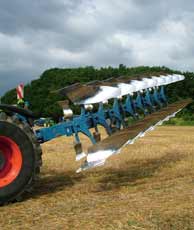 Implement maker Rabe showed off what it claims is the world’s biggest mounted reversible plough last week in Germany. Norman Dunn was there

An eight-furrow plough billed by manufacturer Rabe as the biggest fully mounted reversible model in the world is being tested in practical conditions this autumn. The new Pavo model comes with hydraulic overload system and features the new Rabe in-cab in-furrow/on-land shift system, claimed as a world first by the company.

The Pavo is already available in 5, 6 and 7 furrow models with automatic and stepless hydraulic furrow width adjustment from 26 to 55cm. Rabe reckons 200hp is needed to handle the 5-furrow model, with around 260hp for its top of the range 8-furrow brother.

The so-called UGT3 concept features two 3-point hitches for implements plus up to three fixed mounting positions for sprayer/fertiliser/grain tanks. The first hitch has a direct pto drive with the option of hydraulic power for the second.


Fuel savings of up to 27% in hard ground conditions are claimed for a new Rabe cultivation combi working at 7.5 m – a first model in a planned series of low-draft, large-capacity cultivators from the company.

The new SpeedBird range, to be launched at Agritechnica this November, saves fuel, time and wheelslip through a lighter frame build – but with enhanced overall strength, it is claimed, through new steels with stiffness three times the industry standard for this sort of implement.

The first carrier in the range features discs, cultivator tines and a choice of packers. The four rows of tines are freely adjustable across working width with from 12-45cm spacings between tines and can be set at three different working angles in 15-degree steps.

A new design of telescopic drawbar gives maximum clearance during turns allowing a 90deg angle even behind dual wheels.

Implement depth control is claimed as unique, being through a centralised hydraulic circuit using the combi wheels and axle as base for continuous adjustment of the whole frame while individual controls for each group of implements within the frame allow a high degree of fine-tuning on the go.