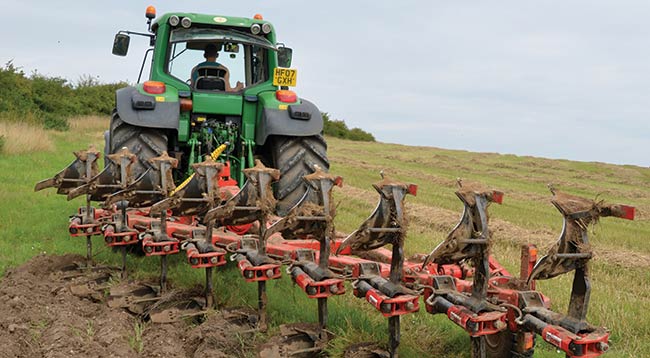 Shallow ploughing is nothing new. In fact the practice has been around ever since man decided – some time in pre-history – that inversion tillage was the way forward.

Since then, various bits of kit have come and gone that employ the concept of just flicking over the surface layer. In the 1960s growers tried disc ploughs and in 1980s square ploughs made a brief appearance.

More recently, big names such as Kverneland and Lemken have dabbled with multi-body reversibles capable of working fast and shallow, but they’ve never really made it into the mainstream.

However, shallow ploughing is starting to see something of a resurgence in Europe and especially in France, where skim plough specialist Bugnot is based.

Keen to promote the concept, Yorkshire-based Ryetec started importing the company’s seven- to 11-furrow RapidLab models a few years ago.

It was at last year’s Tillage event that Dorset tractor driver Peter Ewan saw the RapidLab in action and reported back to his boss – Robert Hyde – on what a good job it appeared to be doing.

Farming more than 340ha (850 acres) of sandy land under an organic regime on the Lulworth estate near Wareham, Mr Hyde is a self-confessed “tryer of alternative options”.

“We’re on some particularly poor, hungry ground here and being organic makes that even more difficult. With the odds stacked against us, we have to be prepared to try out different approaches and not just accept the conventional way of doing things.

“So when Peter came back to me with such a positive report on the skim plough, I decided we needed to try it out.”

The RapidLab was duly delivered to Manor Farm for a demo last autumn and was put to work turning over some rye stubbles ready for fertility-building clover mixes to be drilled.

“With eight 12in-wide furrows running at just 3-4in deep, we couldn’t believe what a good job the plough was doing in burying the trash.

More of a mess

“Initially we tried it with skimmers, but they made more of a mess with the longer straw. We whipped them off and added trash-boards. To look at the finish, you wouldn’t believe we were working so shallow.

“We knocked the top off the furrows with our Vaderstad Carrier and then went straight in with our 4m Rapid drill.”

Such straightforward establishment was the deal clincher – Mr Hyde was convinced it was the way forward for Lulworth’s sandy soils and he placed an order for a nine-furrow RapidLab.

This spring it really came into its own preparing ground for the 120ha (300 acres) of spring oats and barley grown at Manor Farm.

“Although we would like to be min-tilling for all our cropping, the reality is that it’s rarely possible in the spring and we’ve always had to resort to the plough to work the ground in less-than-ideal conditions.

“But of course that undoes all the good work we’ve been striving to achieve with min-till, only disturbing the surface layer, incorporating organic matter and building earthworm populations.”

“Shallow ploughing has proved to be the answer – it’ll go in the wet and we’re maintaining soil health.”

Catching soil conditions at their best in the spring can be tricky and so covering the ground as quickly as possible when the weather allows is critical. The RapidLab has helped in that respect too.

“With the Dowdeswell set to run 8in deep I was burning 3.5-4 litres/hour. With the skim-plough the tractor’s running at 1,600-1.800rpm and isn’t working nearly as hard so it’s down to under 3 litres/hour and I’m covering at least 50% more ground.

“The quicker I can travel, the better the finish the plough leaves – ideally I’d be running at 10kph most of the time but on our banks I’m down to 6kph some of the time.”

Power isn’t the only issue. Having nine furrows means the plough is particularly long and heavy. That means it’s necessary to carry a full set of weights mounted 60cm forward of the nose of the tractor.

“The Bugnot runs fine as long as I can get grip running on-land,” explains Mr Ewan.

“It takes quiet a bit of fiddling about to get it set up right and it needs constant adjustment as soil types vary. But because you’re not working deep, it doesn’t pull up huge lumps, so it’s much better for ploughing out corners and headlands.

“And the finish it provides is so much more level because of that. Hopefully this autumn we’ll be brave enough to drill direct into the ploughing which will make it true min-till.”