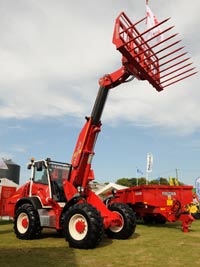 Due to go into production in the coming months, the first models will become available in early Autumn 2009. The TH320 will replace the TH280S model, which has been available since 2004. It has a 126hp Iveco engine coupled with the company’s patented drive train layout, a 40kph six-speed powershift transmission, upgraded axles and limited slip diff. Maximum lift is 5.2m and forward reach 1.6m, and the articulated machine is equipped with 120 litres/min hydraulic capacity. Prices will be announced in the coming months.