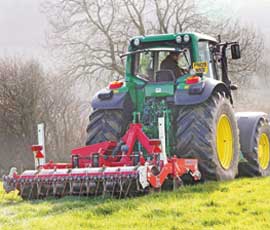 When it comes to subsoiling, grassland isn’t normally the first port of call. But with cattle walking about all over it and tractors, trailers and forage harvesters running on top of it, grassland is a prime candidate for soil loosening – more so, in so many ways, than land destined for cereal production, where traffic is usually restricted to the tramlines.

Mike Hughes farms 80ha (200 acres) near Haverfordwest in Pembrokeshire. He runs a 100-head suckler herd that calves in the spring before offspring are sold off as stores in the autumn.

“We have a mixture of soil types, some of which is free draining and other areas where it is a lot heavier,” he explains. “And it was this heavy land and the problems of drainage and compaction it caused that first prompted me to consider subsoiling.”

The first subsoiler purchased in 2008 was a three-leg Opico that was pulled with a 150hp Fendt Vario 415 and, while it was doing what he considered to be a reasonable job, it left ridges he thought were too proud when it came to haymaking and silaging.

“Ridges aside, the encouraging news was the effect it had on the grass,” he says. “There was little doubt that loosening the soil, busting the pan and allowing better drainage along with improved aeration of the pasture was producing more grass.”

Such was the success, he was asked by his neighbour to subsoil a field or two and, in doing so, embarked on a new contracting business.

“One of the problems with the Opico subsoiler was the number of shearbolts I could get through,” he says. “At nearly £5 each it became a real cost, which on occasions took any profit out of doing the job.”

Having established the benefits of grassland subsoiling, Mr Hughes looked around for a version that could work effectively and cause only minimal disturbance to the surface. It seemed a big ask – first, because pulling a leg through turf seemed likely to cause some tearing of the surface, and second, if the foot of the subsoiler was doing its job there was also bound to be some lifting of the ground.

He settled on the purchase of a 2.5m three-leg subsoiler Sumo had just developed for use in grassland. This version had discs to make the initial cut into the turf and was followed by legs with auto-reset and then a roll with shark-fin blades. The roller was followed by a tined scarifying harrow that gives the grass a rake through and removes dead vegetation.

“I fitted arable points that have 20cm wings and they did a good job of lifting the ground – but not into a ridge,” he insists. “The flat roll just evened up the ground and the shark fins also provided a degree of surface aeration.” He adds that the shark fins also ensure the roll keeps turning in all conditions – wet or dry.

After a season’s work with the three-leg, Mr Hughes decided to go for a four-leg version having the same 2.5m working width. This put the legs closer together and, in his opinion, did a better job across the width of the machine.

“The aim is to provide a sub-surface shattering effect that creates fissures for roots to extend into, allows excess water to drain away, allows in more oxygen and enables the worm population to thrive,” he explains. “With closer leg spacing I was able to fit Sumo’s GLS points, which are narrower than those used for arable conditions.”

“The best conditions to subsoil grass are when the ground is reasonably dry and the soil can be shattered properly rather than just creating grooves through the soil,” he says. “These conditions usually coincide with the end of haymaking or silaging in August/September.”

Mr Hughes says he is also conscious of the mark his John Deere 7530 CVT tractor makes on the surface of the grass – despite the use of wide, low-pressure Michelin XM28 tyres.

“There are times when I think it is better to wait for conditions to improve and do a good job rather than make a mess,” he says. He also sometimes advises farmers to have half a field subsoiled so they can see and compare the improvements in the field.

He charges about £55/ha; fuel consumption averages 18 litres/hour and point wear works out at about £5/ha. He reckons to get over about 12ha (30 acres) in an eight-hour day.

“Last year I subsoiled 400 acres of grassland and this year I hope to get more than 600 acres,” he says. “The demand for subsoiling is definitely increasing as farmers see it as a way of prolonging the usefulness of their grassland through reduced compaction, which invariably happens when cattle graze and/or machinery trundles over it.”