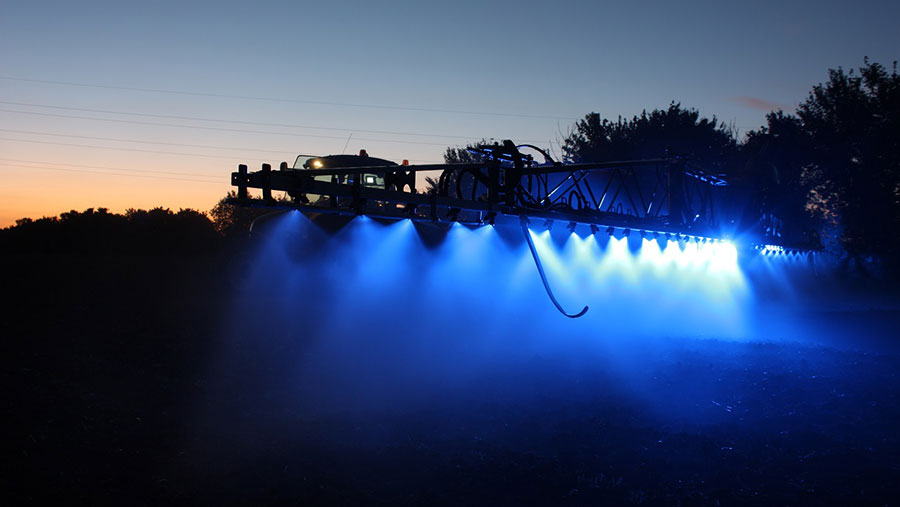 Autumn may be the season of mists and mellow fruitfulness, but it can be a pain if you have lots of spraying to do. Blustery days often rule out any spraying in the first place and, even if you can go, the light fades annoyingly quickly.

But the arrival of two different makes of bolt-on blue LED lights in the past six months promises to give some extra help in extending the spraying day.

The idea isn’t so much that you can spray through the night (though you could), it is more about letting you finish off a field that would otherwise have to be done the next day.

So who are the contenders?

Sprayer manufacturers have been trying out blue LED systems for a while. There are two basic formats; one involves shining a bank of very bright blue LEDs along the boom while the other uses individual LEDs fixed next to each nozzle.

The two bolt-on systems we tested here use just the two lights. They are relatively cheap and can be moved easily from one machine to another.

Belgian maker Comatra uses a nine-LED array. Two lights will cover a boom up to 48m and costs £246.

How easy are they to fit?

Both units were well packed, but neither company provided any information or instructions on how to fit them or, indeed any bracketry. However the lights are well-made, robust and have a quality feel.

A threaded bolt at the back of the light lets you fix the units to the sprayer booms so that they shine along the sprayer nozzles. You need to give the siting of the light some thought otherwise there could be an unfortunate crunch when you next fold the booms up.

We spent a morning making a bracket for the host 24m Amazone sprayer with a selection of holes so we could move the lights up and down. In the absence of any guidance from the makers, we fitted the lights so that the beam shone 10cm below the nozzles.

Adhering religiously to the all the relevant health and safety regulations, we then tried 8ha in dusk and 20ha in total darkness (other that the tractor’s lights, of course).

Yes, they did. Even in complete darkness, the blue lights easily reached to the outermost nozzles and it was easy to see if a nozzle was blocked or a speck of grit was producing a slightly dodgy spray pattern.

Also, the lights shine past the end of the boom, so you can see the hedge as you do the headland.

How much difference was there between the two makes?

Both units did the job well and you could see all the spray patterns along the boom, both with fine nozzles and bubblejets. However, the Comatra’s nine blue LEDs were more powerful and showed the spray pattern better than the Tyri’s four greeny-blue LEDs.

We also found that the slightly more diffuse light beam on the Tyri showed up more of the small droplets, which gave a more misty, swirly look to the spray patterns.

Both systems do the job well. In winter it means you could do a last tank-full of Atlantis at 3.30pm or 4pm and be confident you could finish the field with full visibility of the boom and hedges. It’s probably not suitable for total darkness in fields with trees/pylons/or other obstacles, but otherwise, why not?