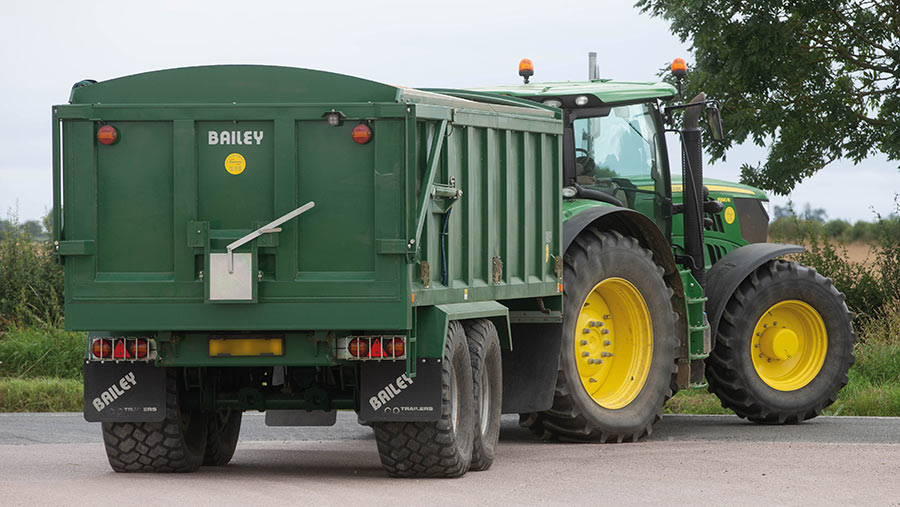 Harvest is the season when machines and staff are operating at maximum capacity, and whether bringing in cereals, root crops, forage or straw, it is important not to cut corners when it comes to haulage from field to farm yard.

Recent changes to the enforcement approach of DVSA mean that load security should be a top priority to avoid unnecessary downtime at the roadside with a trailer under review.

This year, officers may have a slightly different view how agricultural (and other) loads may be assessed on the road, and that means bulk loads will be under the spotlight during the summer.

The legislation, Road Traffic Act 1988 40 (a) and The Road Vehicles (Construction and Use) Regulations 1986, remains unchanged – as follows:

“The load carried by a motor vehicle or trailer shall at all times be so secured, if necessary by physical restraint other than its own weight, and be in such a position, that neither danger nor nuisance is likely to be caused to any person or property by reason of the load or any part thereof falling or being blown from the vehicle or by reason of any other movement of the load or any part thereof in relation to the vehicle.:

From 1 May 2022, this is being applied in a more robust way by the enforcement agencies.

It has always been the case that anything transported on, or in, a road-going vehicle or trailer must be secured so that it does not slide, tip, or bounce off the vehicle or move around inside it so that it affects the vehicle handling.

Statistics have shown that in the 10 years since the on-road enforcement approach was last updated, there have been several load shift incidents involving agricultural vehicles, which is one of the motivating factors for this further clarification.

Examiners will now be making a simple assessment about the load security – can it move, or has it moved?

If they decide that it is insecure, they will select the reason (or defect) that best explains the insecure load, which is then printed on the prohibition so the driver is in no doubt why they have a problem.

In short, the load should not be considered dangerous or likely to be shed onto the road during transit.

This means that loads transported on agricultural vehicles and trailers must be secured in the same way as any other load when travelling on public roads.

In terms of loose loads in tippers or similar bulk loads such as grass or grain, vehicles examiners have been instructed to act when a load is not properly sheeted and/or when the load is mounded up in the middle of the vehicle/trailer above the height of the sides.

It is important, when assessing loads, for the operator to consider load security in conjunction with work at height and manual handling when thinking through the risks in their business.

Full detail of the “defects” that will be looked for if you are pulled over can be found on the DVSA’s categorisation of vehicle defects (PDF) (p51 onwards).