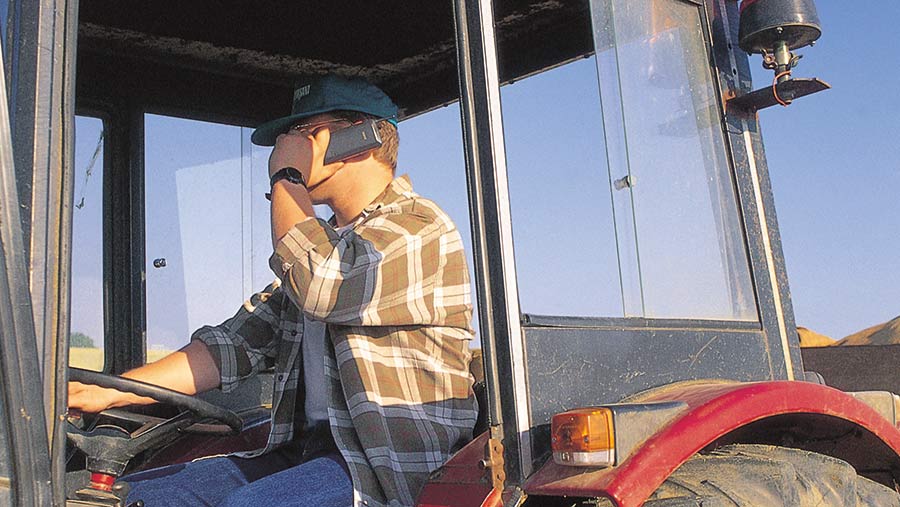 Tractor drivers have been warned about using mobile phones while driving following complaints from members of the public.

Police Scotland says concerns have also been raised by the community about tractor drivers exceeding the speed limit.

Officers will be looking out for drivers who flout speed limits or choose not to wear their seat belt, if their farm vehicle is fitted with one.

Motorists who are caught using a hand-held mobile phone while driving will have six penalty points added to their driver’s licence and a £200 fine.

The Department for Transport says research shows distracted drivers are four times more likely to crash, and reaction times slow by half compared with alert and focused drivers.

The speed limit for a tractor and trailer up to 2.55m wide is 40km/ha (25mph), while high-spec tractors such as a JCB Fastrac and Mercedes Unimog can travel to 64kph (40mph).

Chief inspector Mark Patterson, from Police Scotland’s road policing division, said: “Every driver knows they have to obey the posted speed limit and not recklessly distract themselves by using handheld devices and wearing a seatbelt.”

“With the modern communication and warning systems now present in most motor vehicles, there is simply no excuse for heedlessly exceeding speed limits, using a handheld device or not buckling up.

“We will stop drivers who are behaving selfishly and irresponsibly, and enforce the road traffic laws with the appropriate penalties. My message to all drivers is quite clear – obey the law and #drivesmart.”

Since 1 April 2019, 18 people have died in road traffic collisions in Scotland. Driver distraction is considered to be a major cause of road accidents.

Get up to speed with road safety rules at workshops

Farmers and crofters in Scotland have an opportunity to get up to date with the latest legislation on agricultural vehicles, especially their use on the roads.

Two agricultural vehicle workshops will be held at St Boswells on Friday, 17 May and Cupar on Thursday, 30 May.

Organised by NFU Scotland, in partnership with the Driving and Vehicle Standards Agency (DVSA) and Police Scotland, the workshops will cover various topics, including weights, loads, licencing, types and general maintenance.