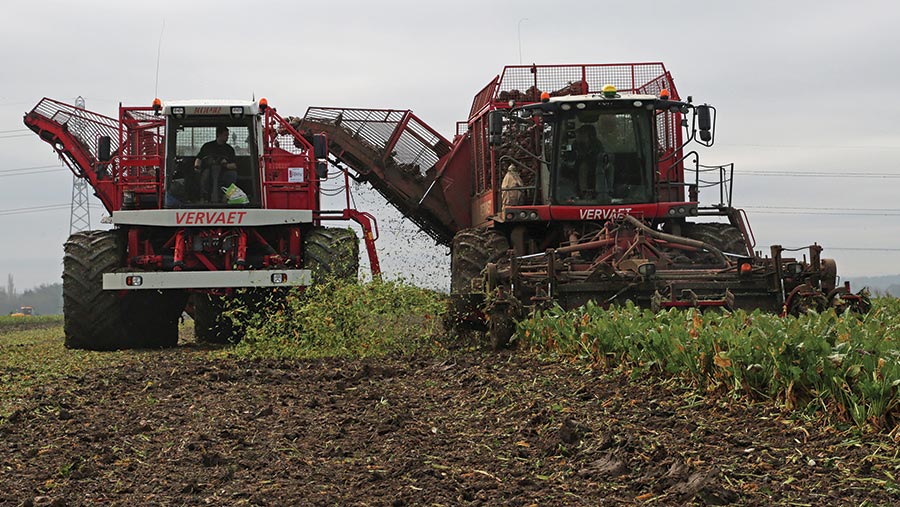 The base unit of the chasers is formed from old 625 or 925 Beet Eater harvesters that retain the 600hp 16-litre Deutz V8 engine and Sauer Danfoss hydrostatic transmission.

This has helped to keep on top of build costs, says J Riley, though all parts are treated to a thorough service, with replacements added where necessary.

The holding tank has been modified to fill the space left after removing the redundant ring trace.

This has kept the hopper’s size fairly similar to that of a harvester, as the extension sides on the original machine are to allow for the elevator reach required for unloading.

To avoid damaging beet when adding to the heap, drop height can be reduced by lowering the discharge elevator to 2.5m, and it can reach up to 4m when topping up a stack or unloading into a wagon.

Discharge time is about 40sec and the tank can hold a full load from a brimmed harvester.

By removing the front lifting gear that is surplus to requirements, the overall weight of the machine has dropped – J Riley says that it weighs far less than a high-horsepower tractor and large chaser bin.

Sitting on 800mm-wide tyres helps spread the weight and some models can use the front extending axle option, too. It still features the six-wheel steering, offering a turning circle of 7.9m.

All the alterations were carried out by J Riley at its Norfolk base, and the Beet Eater Chaser costs in the region of £60,000-£90,000.

The first model was brought by Notts-based contractor JP Plowright and Son.

The company already runs a 625 and a 925 harvester and was in the market for a chaser to help out with the wet winter.

Ed Plowright’s model is based on a 925 harvester, which has the extending front axle, so every wheel runs in its own path.

“It travels much better than tractors and trailers, going where they won’t and it rides better, too,” says Mr Plowright.

“The field is left in a better shape and there are no trailer ruts under the beet heap, which is important when making one to be cleaned and loaded by a Maus.”