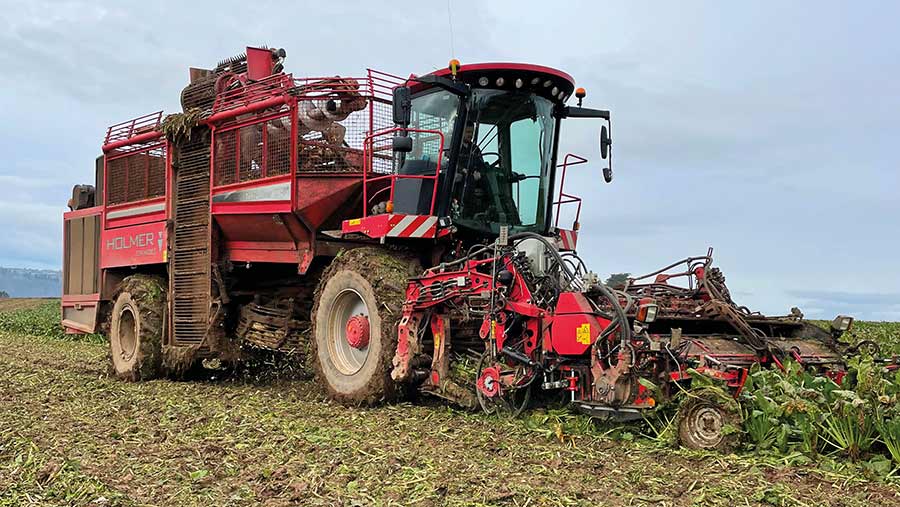 When British Sugar shut its West Midlands factories in the mid 2000s, the area’s beet growers and lifting contractors were left severely in the lurch.

With no outlet for the crop, most farmers stopped growing immediately and those running costly self-propelled harvesters suddenly found themselves with no work.

One of these was Herefordshire contractor John Helme, who, a few years before the closures, had invested in a factory-reconditioned Holmer T1 harvester.

With several finance payments left to run, he had two options – sell the machine or scratch enough work together so he could keep paying it off. 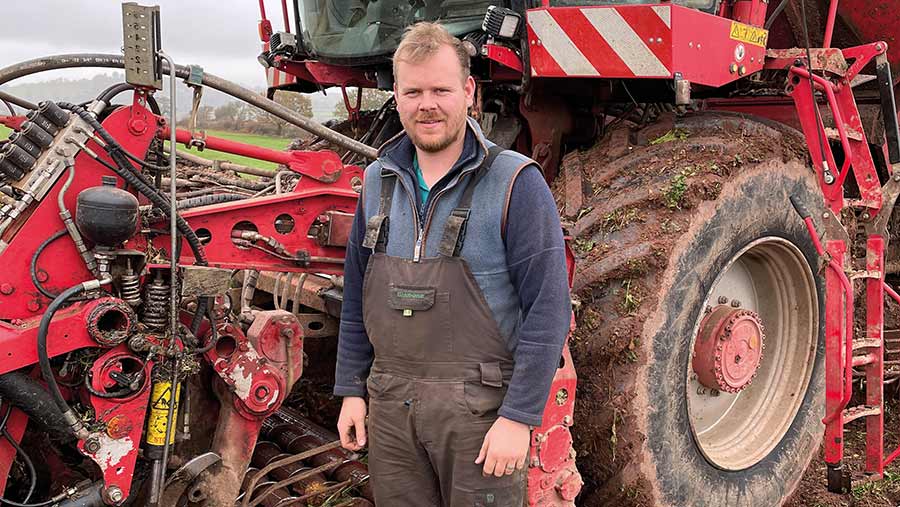 “We thought our world was coming to an end,” he says. “I grew up around sugar beet and have loved it ever since the early days of my dad running a trailed Catchpole Cadet.”

Most contractors in the area decided to cut and run but, keen to keep the family beet-lifting tradition alive, Mr Helme went to the bank manager and put a plan together for paying it off.

The first few years were tough, but gradually the area of fodder beet expanded, and he began travelling farther afield to pick up work.

Almost fifteen years on, the lifting area has expanded considerably, but it’s still some way off the British Sugar days.

For this reason, Mr Helme and his foreman, Tim Hinksman, run good second-hand machines, the current model being a 2016 Holmer Terra Dos T4.30.

We caught up with them in the early part of the 2021-22 season to find out what goes into running a harvester like this in a non-sugar- growing region. 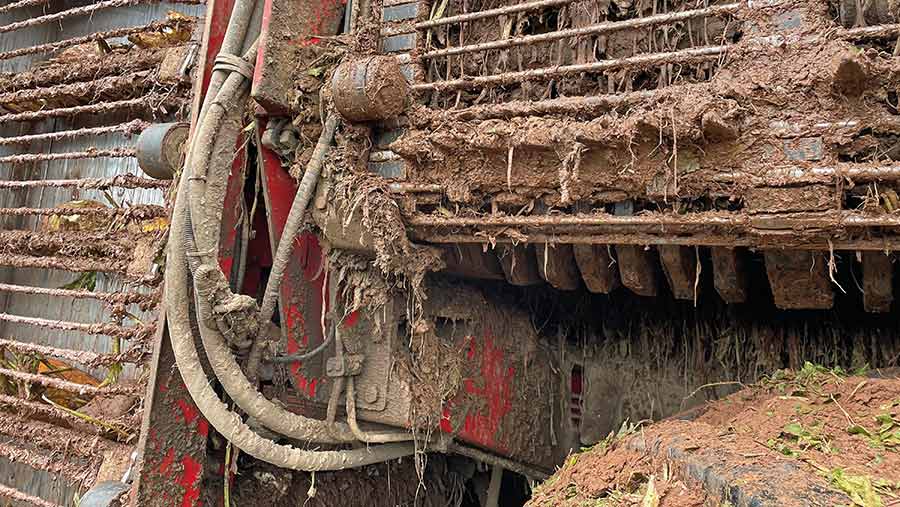 How long is your season?

We start lifting in October and run continuously until the end of March, sometimes straying into April. We’re nearly always planting the next crop before we’ve finished lifting the last.

Fodder beet growers tend to want the crop lifted in the earlier part of this window, and it’s mainly our anaerobic digestor energy beet customers that keep us going into the spring.

It’s a long season, with plenty of dark days, mud, breakdowns and precious little time off over Christmas. You have to be properly into lifting beet to stick it.

How far do you travel?

About 90% of our lifting is fodder beet, so we end up working in lots of small fields dotted all over the place – many are less than 5ha. Our base is just south of Hereford, and we’ll travel well into Wales, Shropshire, Worcester and even the Cotswolds.

For some of the longer moves, we get local haulier Nick Meyrick to take the harvester on a low loader.

However, we’ve gradually picked up jobs between some of these locations, which means it increasingly makes sense to drive the machine.

We’ll regularly do a 40-mile jaunt to get to a job, and some are even further.

Our new-to-us T4 has a faster top speed than the old model, which makes it easier to cover these distances without having to load it on a trailer.

On the road we have it set so that the front wheels do the steering, but to get around roundabouts we also need to steer the back wheels using the joystick.

Tyre wear is a consideration, as a new set costs about £20,000. However, the road work doesn’t wear them down as much as you’d think, and it’s all factored into our running costs. 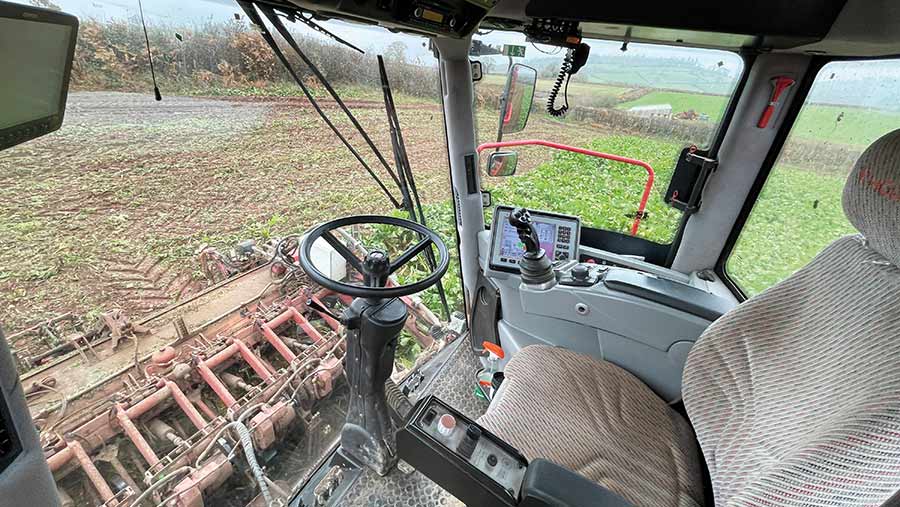 We had our first Holmer in 2003 and have stuck with the brand ever since. Back then, it was the best machine, with a lifting and cleaning system that was very kind on the crop. They’re still good now, but the competition is gradually catching up.

The T4 arrived at the beginning of last season to replace a T3 that we had run for a few seasons. This was starting to show its age and had some ongoing transmissions problems that we couldn’t get to the bottom of.

Initially, we priced up a new model, but at just over £490,000 it was far too expensive to justify on our lifting area.

We have bought factory-reconditioned models in the past, which are almost like new internally, but these were also a bit too pricey.

In the end, we opted for a good second-hand model that had done about 3,000 hours. It came in at almost half the price of a new one and we got a bit of warranty to get us through the first season.

What are the main upgrades?

Engine revs during work are just 1,100 rpm, so it hums along quietly and uses surprisingly little fuel ­– the tank holds 1,200 litres, but it generally lasts several days.

There is also a smarter cab with a combine-style windscreen, rather than the old split screen on the T3.

This gives an uninterrupted view of the lifter and makes the cab quieter, but there were occasions where it was handy to open the bottom section of the old screen.

More importantly, it has a significantly tighter turning circle, meaning we can loop round faster on the headlands, and a higher top speed of 40kph.

The old T3 maxed out at about 33kph, which doesn’t seem much less, but it makes a significant difference to our journey times. It’s also reduced our reliance on HGV haulage, which usually costs about £300 a pop. 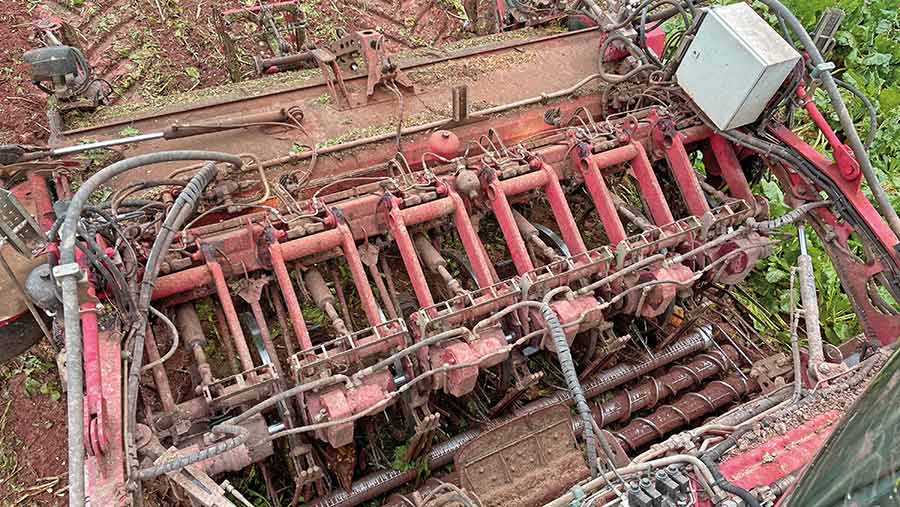 How does the machine work?

At the front is the lifting head, which has a flail for either mulching the tops or spinning them out to the side for grazing.

There are also six pairs of shares for getting the beet out of the ground. On the Holmer these are walking shares, which oscillate back and forth to gently tease the roots loose. Depth control is automatic, so once we have it set up, we can let the machine do most of the work.

Sometimes, the depth of a particular row needs to be tweaked slightly, particularly when we’re working along on a tramline, but this is simple to do on the joystick.

Once lifted, the crop moves onto a set of six spiral rollers that knock the worst of the soil off. A webbed transfer elevator then carries the beet to a set of three turbine cleaners mounted just behind the front wheels.

These do the bulk of the cleaning, before transferring the crop to a ring trace elevator that carries it into the tank.

To ensure even filling, there is an auger running along the top of the tank that levels out the load. Unloading is via a fold-out webbed elevator, and there are chains in the floor of the tank that carry the beet to it. 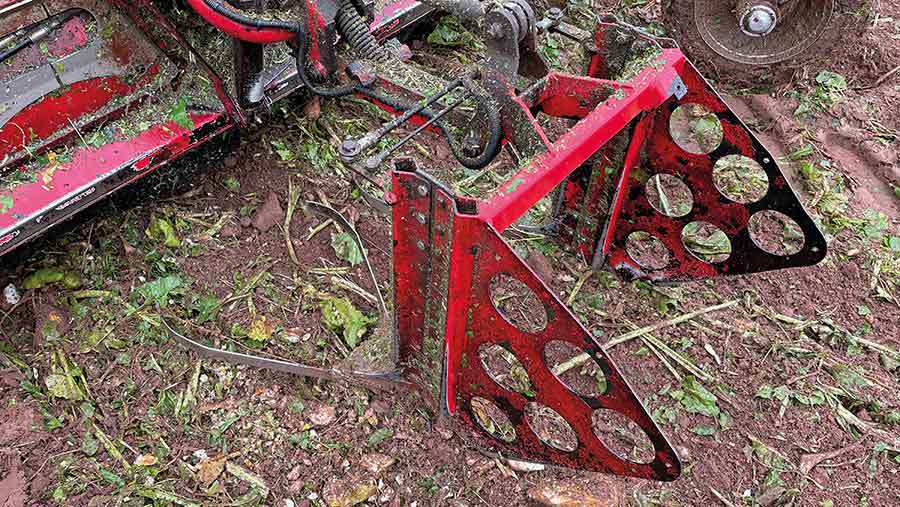 How do you drive it?

Once the machine is set up and working properly, it will largely drive itself.

The front wheels by the lifting shares and the rears by a leaf feeler at the front, and we only get involved if it steps out of line on a slope, or we’re lifting beet that someone else has planted with a narrower drill.

Our drill is a Grimme Matrix 12-row, so it matches up neatly with the harvester’s six lifters.

But if someone has drilled at five rows without GPS there can be some slight inconsistencies.

We’re currently planting using John Deere Greenstar on the SF3 signal, but we might upgrade to RTK for even greater accuracy.

Speed for the hydrostatic transmission is controlled using a pair of pedals – right for forward and left for reverse – but most of the time we run with the cruise control engaged.

A nice lifting speed is 6kph, but we can go up to 9kph if the conditions are good.

There are plenty of adjustments on the joystick, so we can fine-tune the settings.

These include the ability to nudge the lifter from side to side, adjust the depth of individual lifting shares and vary the height of the topper.

For each job, there’s a bit of playing around to get the settings right, and we’ll often adjust the speed of the transfer elevator and turbine cleaners to get the crop flowing nicely. 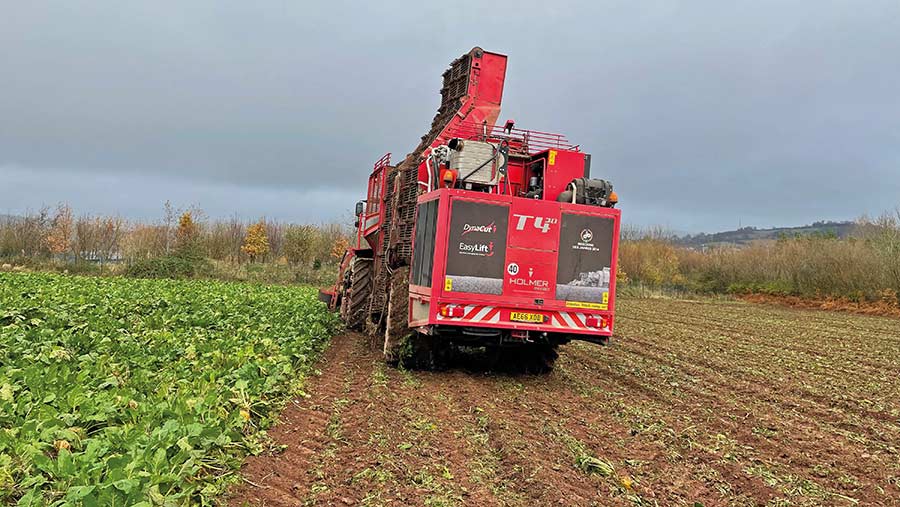 Do you ever get stuck?

We use the Terra Dos system whenever we can, which offsets the wheelings so that compaction is reduced. If it’s particularly tough going, we can engage the front and rear diff locks and it’ll pull through most stuff.

When we have got bogged down, we’ve just needed a bit of help from one of the tractors. We’ve seen the videos of people who have got them properly stuck, though, and it doesn’t look much fun. 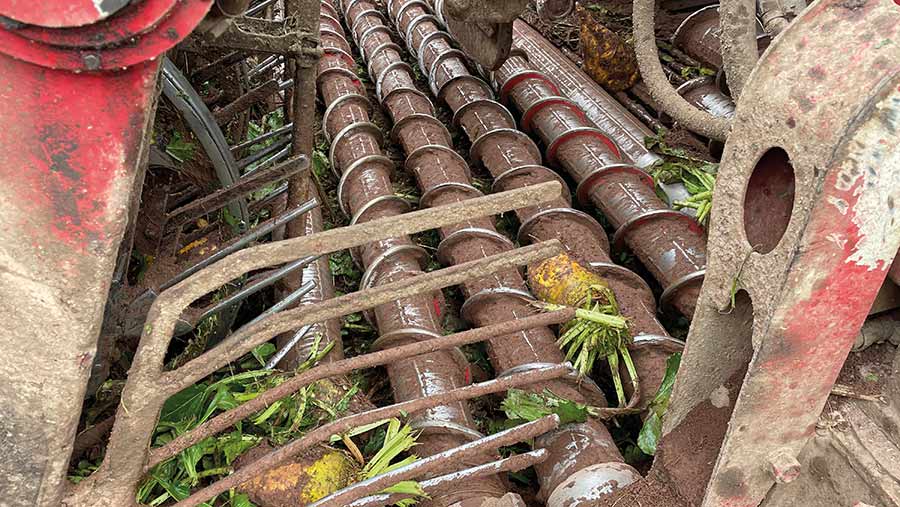 Is there a lot of maintenance?

Routine daily maintenance is surprisingly straightforward, as almost everything is hooked up to the auto-lube system.

This gets topped up at the end of the day when the engine is hot and the grease is easier to handle.

Other than that, we just need to dip the oils and grease four rams on the lifter. However, as the machine is working in the soil all day, there is a lot of wear and tear to deal with.

Most days we’ll have something that needs to be fixed, and there’s usually a running list of jobs that we get to when we can.

In the summer, it gets a complete strip-down and major overhaul in preparation for the season. This work has to slot around our forage harvesting, so the job always seems to run to the wire.

Ahead of this season, we flipped the bed chains in the tank and fitted some wear plates underneath to make the floor last longer. We also added some steel bands to the front depth wheels, which we will replace periodically to stop us wearing out the rims.

We do most of the maintenance work ourselves, but struggle when it comes to fixing problems that require diagnostics.

Agrifac (Holmer’s distributor in the UK) isn’t currently supplying diagnostic software to customers, so we have to rely on support coming all the way from Cambridgeshire.

One of our best sources of information and technical assistance is independent mechanic Chris Coleman. He used to work for Agrifac, but has now set up on his own – he’s the oracle on beet harvesters and is always at the end of the phone to help us out. 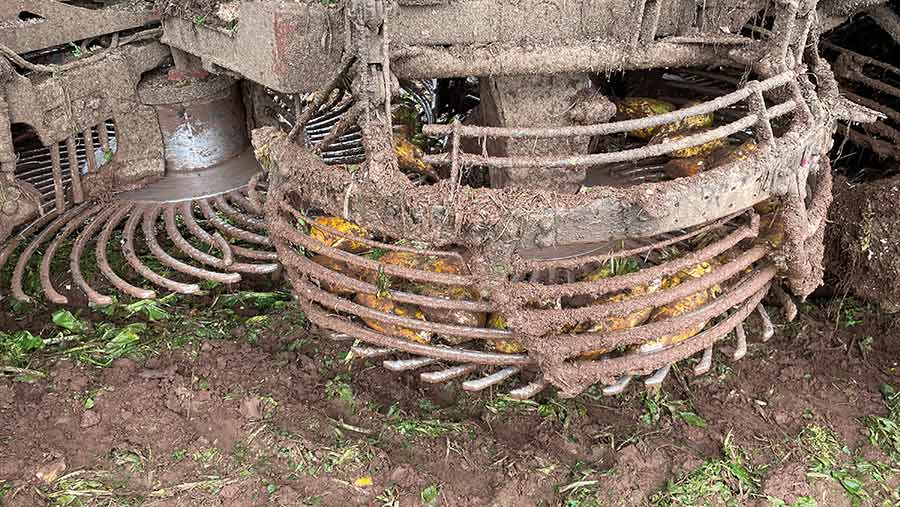 What would you change if you could?

One of the worst things about Holmer machines is the quality of the paint finish. Our model is only five years old, but the paint is flaking off the chassis and bodywork, which makes it look a lot older and rougher than it is.

From a driver’s point of view, it would be nice to have a touchscreen rather than our static display with a jog dial. It gets a bit tedious having to scroll through a long list of menus to get to the setting you want.

Touchscreens are standard fitment on newer T4 models, so it’s a shame ours is a bit too old to have it.

But the biggest problem is the fact that we are located so far from the dealer. We think diagnostics software should be made available to us so we can get ourselves up and running quickly. 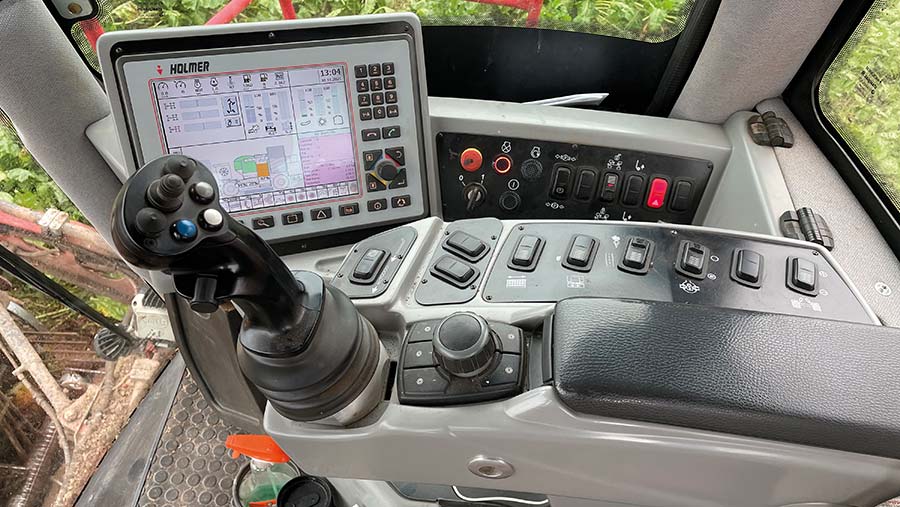 A few years ago, we would only consider having a Holmer. However, the competition has improved significantly, so we might look at them more seriously next time.

If we were able to get a newer machine with longer warranty and better backup, it would be seriously tempting.

One thing Holmer does have in its favour is that we know the machines so well. If we did decide to switch to another brand, we would have to go back to the beginning and start learning all its quirks from scratch. 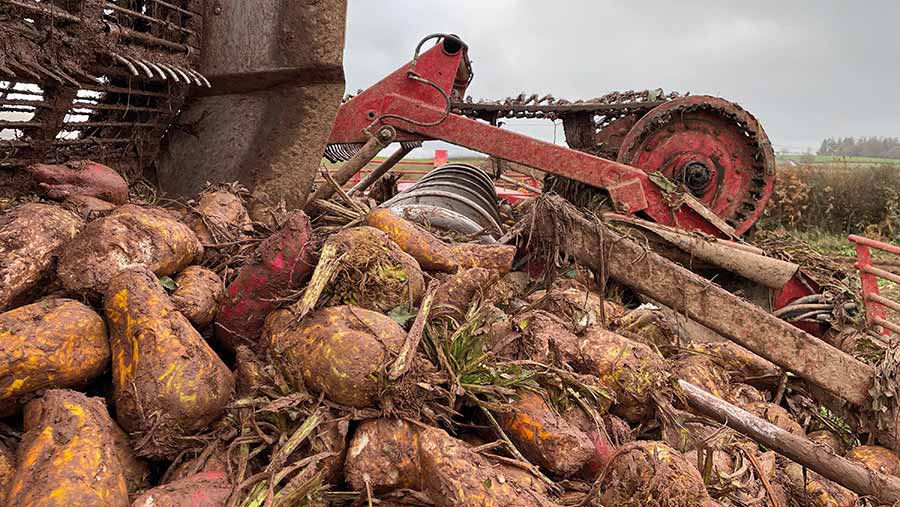