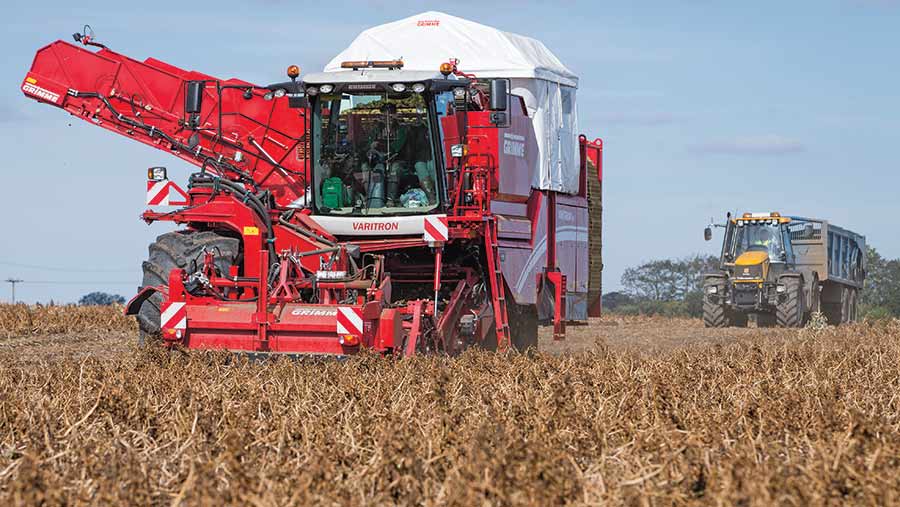 As the potato harvest rumbles on, the efficiency and reliability of the kit being used to get the spuds out of the ground is undoubtedly being scrutinised.

With a shortage of potatoes in Europe and the UK following the hot and dry 2018 growing season, experts are predicting a buoyant market and healthy returns for those able to achieve good yields, quality and contract surplus.

In such cases, it may well be the perfect time to reinvest profits in better harvesting kit, according to Brown and Co business consultants Henry Harrison and Charles Whitaker. Here, they run through some important considerations ahead of making any purchases.

With potato growers becoming fewer and larger, the direction of travel is generally towards larger self-propelled harvesters.

With such a huge capital investment – up to £500,000 in some cases – growers need to be committed to potatoes for the long-term and in a profit-sustainable way, with secure access to land, water and contracts that return profits to growers. Too many producer returns have been break-even at best over the past few years.

However, knowing the cost of the harvest operation is crucial, which includes area and tonnage to be covered, the crop value and length of harvest season.

With self-propelled machines being larger and more complex, key staff at a farm’s disposal should also be factored in. Whether current staff can operate, or be trained to operate, a new machine is critical.

Varieties grown, storage and location of land and access to it all need to be considered in harvester investments. If growing different varieties for different markets that need to go into separate stores across different locations, multiple trailed harvesters could be a better option than consolidating into one larger machine.

Similarly, if land is spread out, which is often the case as potato producers supplement their owned land with rented potato cyst nematode-free ground and water availability elsewhere, or field sizes are small and access to land is tight, it might be more practical to have smaller trailed machines.

However, it may also be possible to streamline operations to allow for investment in one large machine or enter a machinery sharing arrangement, allowing business to reduce operating costs and share skilled labour resources.

This could be well suited where one business has early harvesting demands and is selling direct off the field and the other is harvesting later and going straight into store. Running machinery over a longer operating window is one way of reducing operating costs per ha or per tonne harvested.

Individually, trailed machines are cheaper to run and can usually be made to last much longer. This spreads capital costs over a longer period, though webs and drive trains will vary directly with tonnes harvested.

Period of ownership and extended repair warranties are important on higher-capital-cost machines, such as a self-propelled harvester.

However, to analyse the comparisons accurately, growers should look at the comparative ownership and operating costs of a trailed machine and associated tractor unit, bearing in mind the additional usage of the tractor on the farm throughout the year.

A general view would suggest a tractor and trailed machine is likely to be more competitive for up to 120-160ha, whereas a single larger self-propelled machine could be viable for an enterprise of 200ha-plus.

If a business is looking to invest in a self-propelled harvester then seeking a guaranteed buy-back if purchasing outright will provide some certainty about the depreciation cost of the investment.

Tax relief through the Annual Investment Allowance (AIA) and writing down allowances might well be a consideration for later in the 2018 season and next year if shortages drive significantly higher prices for off-contract product.

Prior to making these sort of investment decisions, Brown & Co encourages its clients to look at a range of macro factors, including:

A drive for increased efficiency, less compaction and an ability to load bulkers or boxes straight from the field was behind potato growing and marketing group AKP’s decision to invest in a self-propelled Grimme Varitron 270.

The business has growing operations in two separate counties, with just over 220ha of pre-pack and processing crops in Lincolnshire and a further 260ha of processing further south in Suffolk.

Until last season, harvest in Suffolk had been carried out by two Grimme GT170 MultiSep machines, which were eight and nine years old. 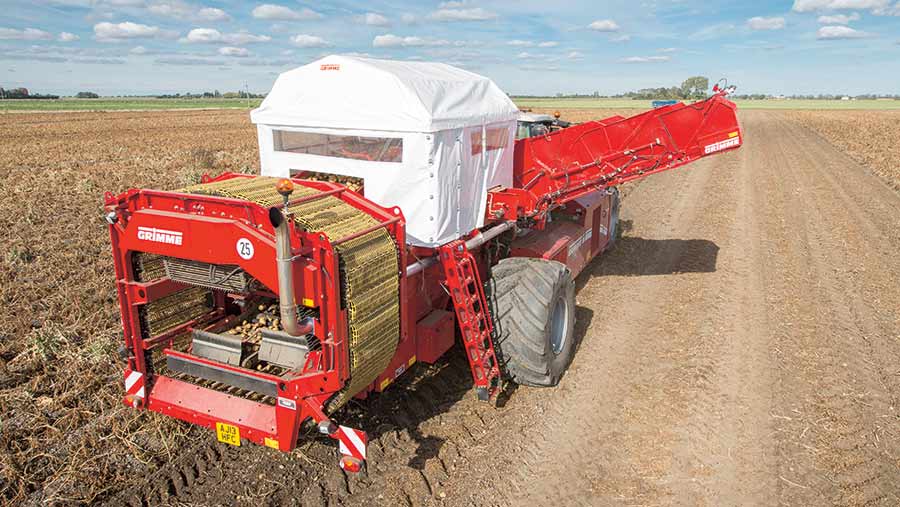 However, operations manager Ben Mordue says concerns about long-term soil structure damage caused by trailed harvesters and trailer traffic was a concern across its cropping area.

In addition, there was a desire to increase throughput and harvesting efficiency, so the two Suffolk-based GT170s were sold into Eastern Europe and the business invested just shy of £400,000 in a Varitron 270 with haulm topper.

Mr Mordue explains that although the Varitron is expensive when costing up the equivalent price of a favoured John Deere 6215R with new GT170 (at about £345,000), capital cost is in a similar ball park to a self-propelled machine.

While the potential utilisation of tractors was a consideration, because the farming business is almost solely growing potatoes, it wasn’t a decisive factor.

Having looked at self-propelled machines from other manufacturers, which were about £40,000-£50,000 cheaper than the Grimme, Mr Mordue says the separation and tuber handling systems were more aggressive than the German-built option.

The business had been used to its gentler crop handling on the outgoing GT170s, so they opted to stick with Grimme and went for a 270 with a double MultiSep system and four-man picking table.

This sees a more thorough cleaning of the crop and allows delivery straight off the field, cutting the need for grading, reducing handling and minimising the potential of physical damage to the tubers.

Mr Mordue says the Suffolk operation was streamlined by growing processing varieties only and staggering planting dates to spread harvest evenly across the season.

As a result, productivity has jumped. In good conditions, the Varitron is averaging about two acres per day extra, largely due to its manoeuvrability on headlands and in short work, with its 7t bunker allowing it to run alone for periods without tripping over trailers.

“In a year like this [2018] where we’ve had a later start, it is important to be finished quicker and it’s about one day a week we are getting back.

“We hire in [trailer] tractors for harvest, so we’re reducing hire and labour costs and that’s worth about £1,000-£1,500 a week alone. That chips away at the difference in price over trailed machines,” explains Mr Mordue.

Depreciation on such a large investment was a concern to the business, with a significant drop in value after the first year. However, the Varitron should pay for itself in about five years and it will be kept for seven, squeezing out maximum value.

Specialist seed potato grower Mark Warkup opted to continue with a pair of trailed spud harvesters last year, maintaining flexibility to be in two places at once and keeping capital costs down.

Based near Haisthorpe, between Driffield and Bridlington, Mr Warkup started his farming business from scratch 15 years ago and grows about 25ha of pre-pack potatoes, 125ha of seed and carries out 80ha of contract harvesting each season.

From the start, the firm has run trailed machines, starting with one and now operating two Standen T2s. One was bought in 2011 with one season on the clock and an old Enterprise traded in for a brand new T2 last year.

Being on the cusp of the acreage deemed viable for a self-propelled machine, it could have been a consideration when investing in the new machine last year, but Mr Warkup says the outlay and depreciation were too much to swallow.

“I don’t think we have the acreage for a self-propelled and feel they wouldn’t give us the same output as two trailed machines. We also need the tractors for spring work.

“There are a few local growers that have one and although they get on well, they’ve found they sometimes need to call in an extra trailed machine for support or to windrow out in front,” he says. 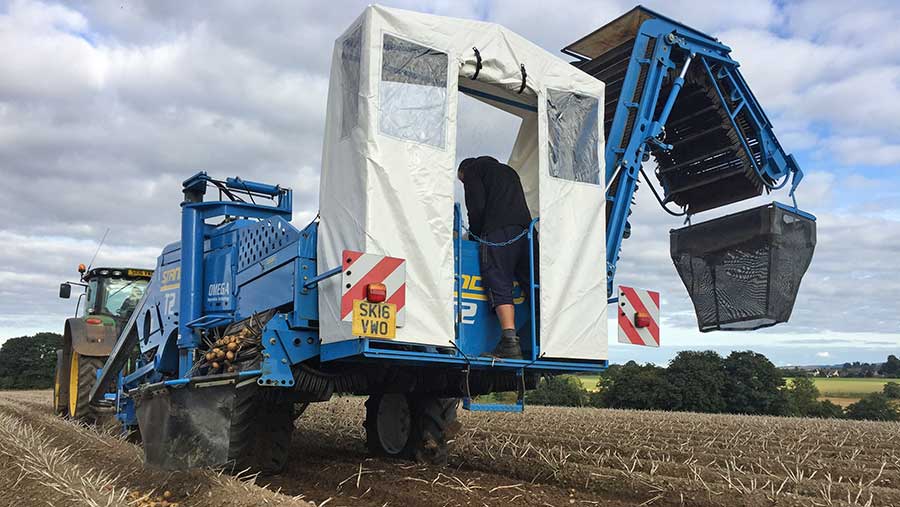 Last year, the new T2 with six-man picking table cost about £140,000 and is very competitive compared to the equivalent Grimme, which is roughly £200,000.

Mr Warkup says the simplicity of the T2 was another good reason to stick with the Standen, with almost all hydraulic drives and just one chain to service.

It also has a rotary wheel which can be quickly and neatly folded underneath for a road width of just 2.9m – a must when land is spread from north Yorkshire down to the Humber Bridge.

“It is also a lighter machine than others on the market and we’ve been lifting side-by-side with competitors in difficult conditions and been able to travel and continue harvesting when others have stopped,” he adds.

Standen peg depreciation costs of a T2 covering about 121ha/year at £20,000/year, if on a three-year replacement strategy. To keep this expense down, Mr Warkup runs his until reliability is brought into question.

This involves going through each harvester with a fine-tooth comb ahead of each harvest and keeping them well-maintained, says Mr Warkup.