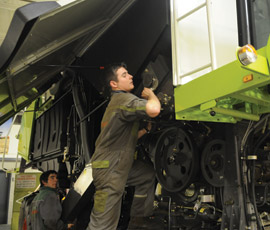 The breakneck pace at which farm machinery technology is developing means manufacturers and dealers are having to find new ways of providing repair and maintenance support, explains David Cousins

The massive increase in the power, sophistication and sheer ability of farm machinery may have been great for farmers, but spare a thought for the dealer mechanic. His job has never been a particularly easy one, but the complexity of modern machinery means it’s now truly challenging.

It also means that machinery makers and their dealers will need to have mechanics (or rather technicians – there is a distinct difference) of the highest calibre if they are to successfully keep up with the heady pace of technological development.

And that’s a problem because when it comes to getting skilled mechanics, farm machinery dealers have always struggled to compete with the higher-paying automotive and general engineering sectors.

Not only that, but almost all dealer technicians in agriculture come from a farming background, which inevitably restricts numbers. It’s a tricky situation, says John Palmer, Claas UK’s training development manager.

“What often happened was that that the mechanic would build up his skills at an agricultural dealer, then he’d leave to go to a parallel industry where the pay was higher,” he says. “Agricultural engineering is an invisible industry and almost all the recruitment comes from people from a farming background – the trouble is that there are fewer people around in our industry.”

Four years ago, the UK farm machinery industry took action to deal with the lack of career structure in the industry by starting the Landbased Technician Accreditation (LTA) Scheme. The idea was to provide a benchmarking system so that the technicians themselves could see a career path ahead and employers could identify and reward the best practitioners.

The big machinery makers and the Institution of Agricultural Engineering (IAgrE) got behind the scheme quickly. Four grades were introduced.

* LTA1 covers new entrants and apprentices and gives them a chance to experience all aspects of farm machinery.

* Those who reach LTA2 become qualified mechanics, while those who move on to LTA3 become product specialists with particular skills in fault diagnosis.

* Those who get to LTA4 take those problem-solving skills a stage further, points out Claas after-sales manager Alastair Tulloch. They’re the people with Sherlock Holmes-type investigative skills who can track down the fault that’s kept everyone else scratching their heads. However only 10% of the workforce get to this level, he adds.

So how’s the new initiative going? With 2600 people registered across the four LTA tiers, the scheme is working well, says Mr Tulloch. Some 90-95% of those technicians are working within major franchised dealers with the remainder at independents.

The relatively small proportion of people reaching the top LTA4 grade sounds disappointing, but Mr Tulloch reckons it’s probably simply a measure of the huge amount of training (and time) that’s required to get to that stage. It typically takes seven years and £150,000 of investment by the dealer to get a technician from LTA1 to LTA4.

How do farmers view it?

Having highly skilled and well-trained technicians working on your farm machinery sounds like something any farmer or contractor would attach a lot of importance to. After all, the quicker the technician finds what the problem is, the sooner that machine will be back in action and the smaller the final bill will be.

However diagnosing problems is rather more complex than it used to be. There are simply far more components on any given item of farm machinery than there were in the past. So it’s often hard for the technician to know whether the problem is in the tractor or in the implement.

Laptop-based diagnostic tools help, says Mr Tulloch, but it still often comes down to human diagnostic skills to work out where the problem is.

Indeed, the fast-rising complexity of the machinery has meant that Claas has doubled the amount of training it gives its 400 or so technicians and parts managers.

“We aim to give each person 10 days of specific product training a year,” says Mr Palmer. “Ten years ago it was a third of that. There is massive urgency to this – the complexity of equipment is increasing almost exponentially and we’re having to work hard to stay ahead of it.”

* To find out more about this subject, see our article on the engineering skills gap