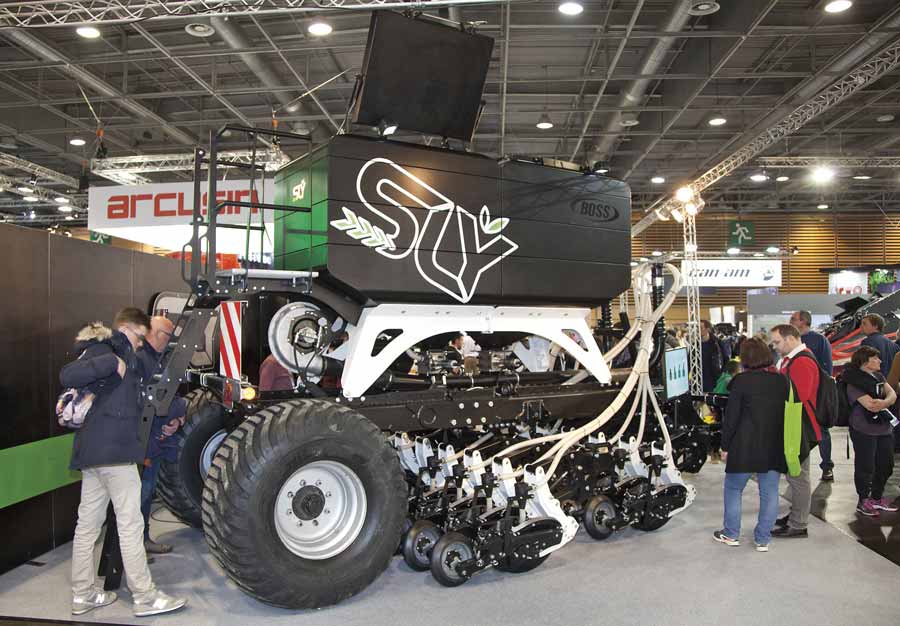 Anglo-french firm Sly Agri was causing quite a stir at this year’s Sima show with its newly launched no-till disc drill.

The so-called Sly Boss uses an angled disc coulter built by Australian firm Boss, which has been modified by Sly to suit European conditions.

The eagle-eyed among you will spot some striking similarities between this and Weaving’s GD. But according to Sly there are quite a few differences.

First, the Sly/Boss coulter is rigidly mounted unlike the pivoting version on the Weaving. Sly says this allows them to crank up the coulter pressure to bite into

Sly says this allows them to crank up the coulter pressure to bite into particularly hard ground.

A rear press wheel controls seeding depth, but there’s another closing wheel mounted on the side of the disc that floats to help it maintain a constant seeding depth.

While developing the drill, Sly said it looked at several different disc coulter designs but found the angled disc the most suitable for EU soils. That’s because it cuts into the soil without causing compaction and prevents the hair pinning of trash.

That’s because it cuts into the soil without causing compaction and prevents the hair pinning of trash.

Coulter pressure is controlled with a hydropneumatic system and the frame has been substantially beefed up to take the strain of the coulters being rigidly mounted.

The rest of the drill is built by Sly including the chassis and split 4,000-litre hopper fitted on the show machine.

This can be configured in several different ways and it’s possible to switch where the seed is sent from each hopper section by flicking a lever. A third hopper can be added, too.

A third hopper can be added, too.

Metering units are similar to those used by Horsch and the tablet-style in-cab screen has been developed with help from electronics firm Softiver.

The drill is available from 3m to 6m on the same base chassis – the 6m just has folding wings added – and there’s a larger 9m version, too. 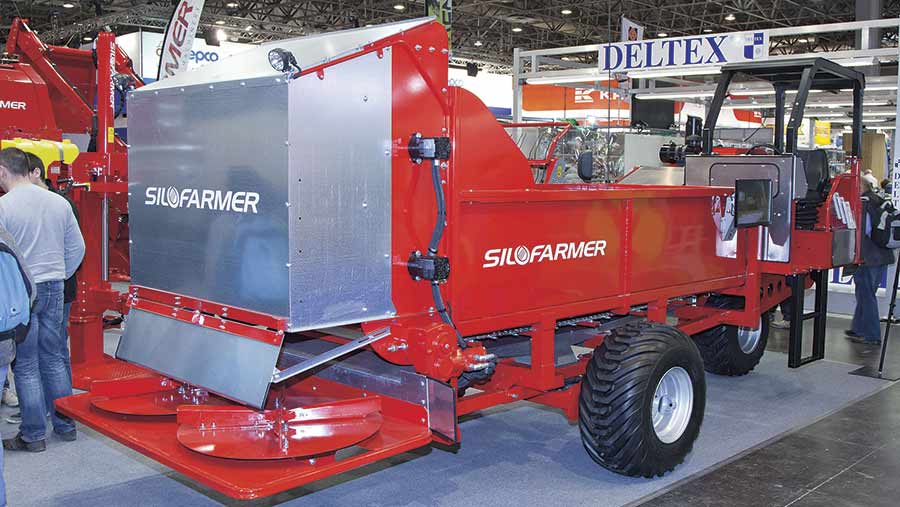 A self-propelled straw bedder might sound a little extravagant, but French firm Silofarmer says it has plenty of demand for its machine, which is aimed at large-scale poultry producers.

Up front, there’s a rudimentary cab that swivels 180deg so the driver can face forwards for moving between sheds and backwards when operating the machine.

The deck can accommodate both round and square bales and spreading width can be adjusted from 5m to 12m by turning a flow regulator. There’s also an option to raise and lower the bed hydraulically.

There’s also an option to raise and lower the bed hydraulically.

Silofarmer says the machine’s 60-litre fuel tank gives it enough juice to do an eight-hour stint before filling up. 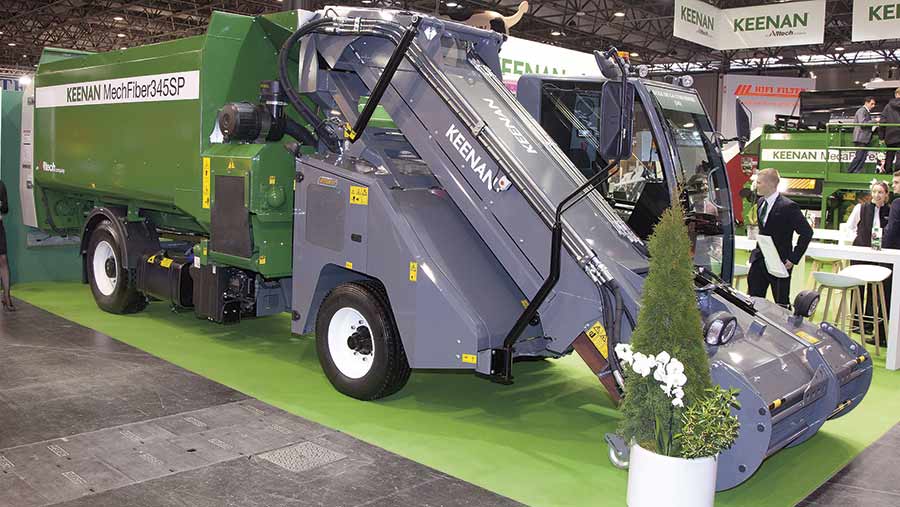 This has a 16cu m capacity and uses six angled paddles to mix up enough ration for about 95 cows.

Keenan has also introduced a new knife design to give greater clearance at the ends of the paddle arms for better quality mixing.

Once mixed, the ration is unloaded via a front-mounted elevator that can be switched to discharge on the left or right.

In the cab, the driver has a monitor for keeping tabs on the mix as well as a camera screen, which shows what’s going on in the tub.

The Storti skid unit is powered by an Iveco four-pot engine, which drives a single speed transmission. 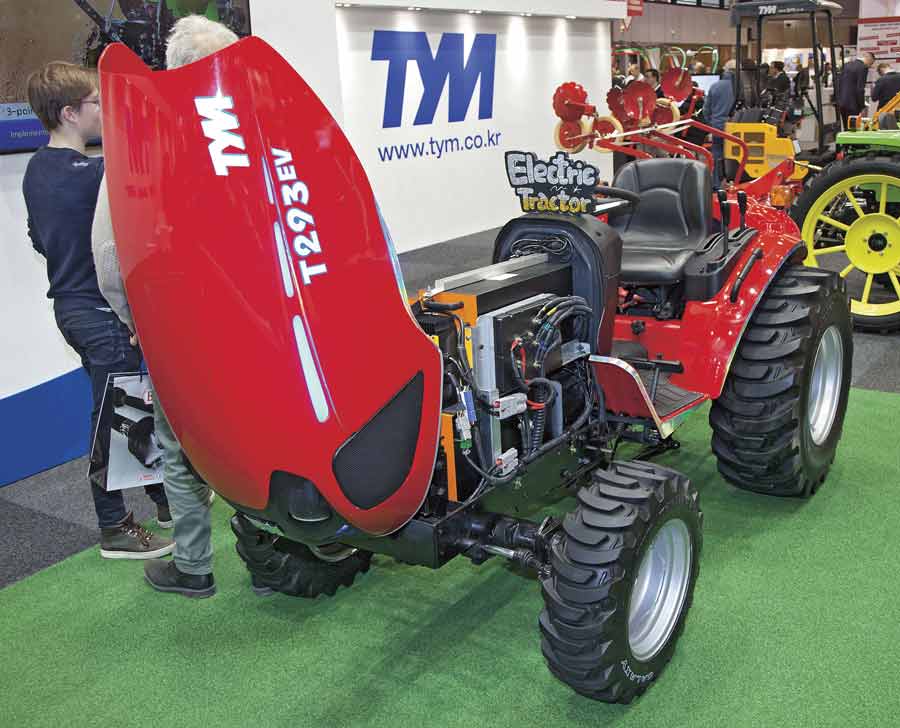 Budget tractor maker TYM was showing off its latest tractor range, which it says is designed specifically for European farms.

The SP range gets its power from a 3.6-litre Deutz engine that uses Adblue and a diesel oxidation catalyst to meet the latest round of emissions regs. in the T1304SP.

All models are available with the maker’s own basic 12-speed transmission or 32-speed semi-powershift with electro-hydraulic shuttle lever.

It only has Cat 2 link arms, though.

There are no prices available yet, but TYM says it hopes the machine will be available soon through UK importer Lely.

The maker was also showing off a concept electric-drive compact tractor.

The T293 EV uses a 20KW electric motor driven by a 72V, 5.5kW battery to give quiet and emissions-free operation. It’s not clear if this will make it into production, though.

TYM also makes a CVT tractor, but this isn’t available in Europe. 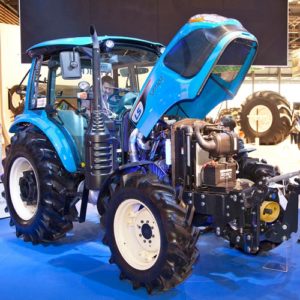 Another South Korean brand slowly migrating its machines to the West is tractor maker LS Mtron.

Signalling its intentions to sell more tractors in Europe, the manufacturer was exhibiting at Sima for the first time in eight years through a French importer, which already has more than 40 dealers on the books.

The XP7102 is the biggest tractor on offer.

This comes with a four-cylinder FPT engine that delivers 102hp to the maker’s own 24-speed transmission.

At the moment no LS Mtron-branded tractors are being sold in the UK, but the maker says it is working with New Holland on some its smaller, compact tractors. 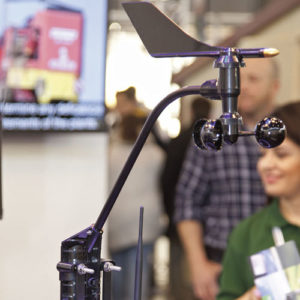 French start-up Sencrop was getting plenty of interest in its competitively priced weather stations that hook up to a tablet or smartphone.

There are two different stations on offer.

These send updates to the user’s smartphone every 15 minutes and there are options to set up alerts if it gets particularly cold, wet or windy. The app also stores all the data recorded and this can be exported to various different farm-management systems.

The app also stores all the data recorded and this can be exported to various different farm-management systems.

Each station is fitted with an ultra-long-life battery that lasts for three to four years and they communicate with the owner’s phone via a cheap and reliable low-range network.

An unlimited number of stations can be hooked up to one user so it would be possible to have one or two in every field if desired. They can also easily be moved between fields.

They can also easily be moved between fields. 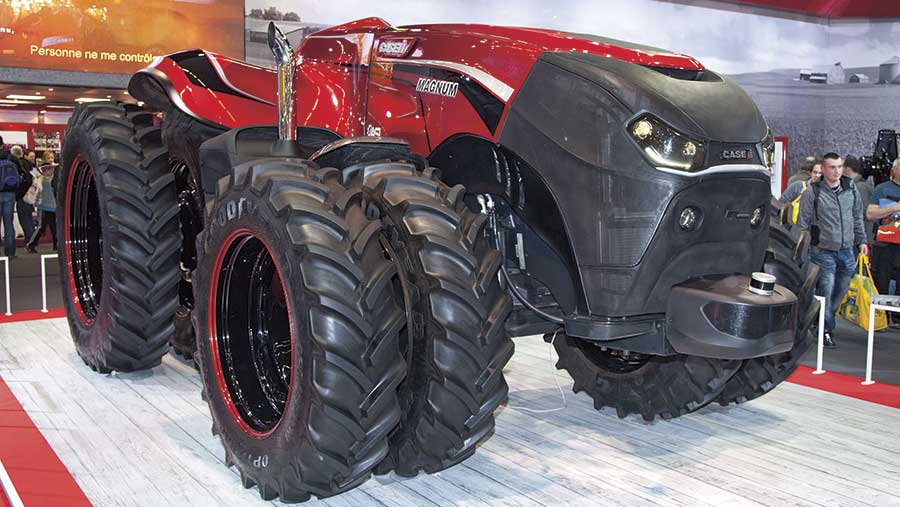 CNH Industrial was pulling in the crowds with two different takes on its autonomous tractor concept.

In the red corner was Case-IH’s fully autonomous cabless tractor.

This is based on a Magnum 370 CVX, which has had the cab removed and series of receivers and sensors fitted to convert it to operate on its own.

These include two GPS receivers, several proximity sensors and a Lidar camera on the front.

There’s also plenty of high-tech software and artificial intelligence that allows the tractor to think for itself.

This means it can make simple decisions such as deciding how to drive round a tree or telegraph pole without any input from the operator.

The machine is controlled by a laptop or tablet computer and can be operated from miles away. 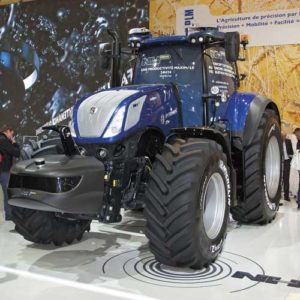 New Holland’s take on the concept is based on a T8.

Unlike the Case-IH this still retains its cab so a person can also drive it.

Unlike the Case-IH this still retains its cab so a person can also drive it.

As there’s less space for stashing equipment a lot of the receivers are mounted on the cab roof and the Lidar sensor and cameras hang off the front linkage.

According to both manufacturers, the machines are fully operational, but it’s likely to be some time before they’re available to buy.

That is largely because there is no EU legislation to govern their use. 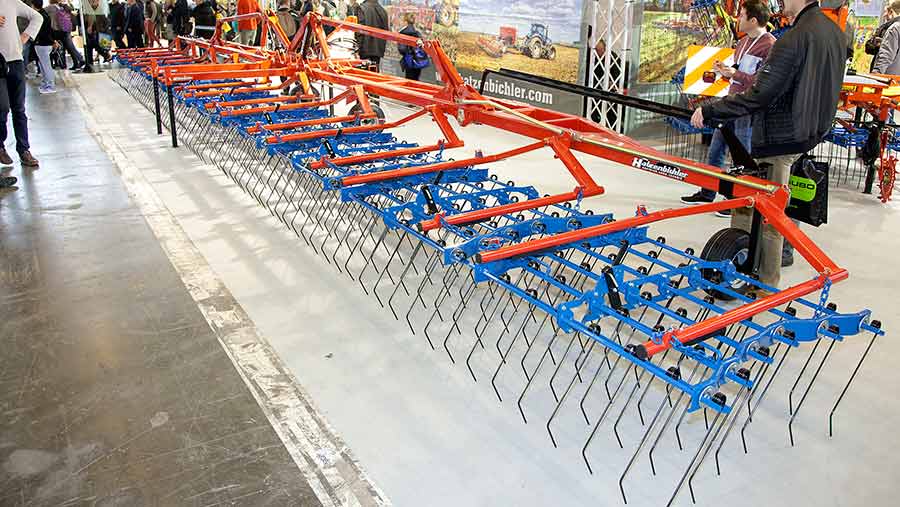 Farmers with a large amount of grassland to keep in shape might be interested in Hatzenbichler’s 12m grass harrow.

The €10,000 (£8,517) rig has six rows of tines with manual angle adjustment to control how aggressively they work the ground.

These are mounted on a hydraulic-folding frame that neatly tucks itself inside 3m for going on the road.

Hatzenbichler says the harrows are often teamed with an air seeder unit, such as its new Air 16.

This has a 400kg hopper with 16 seed outlets that can be spaced out across the harrow. 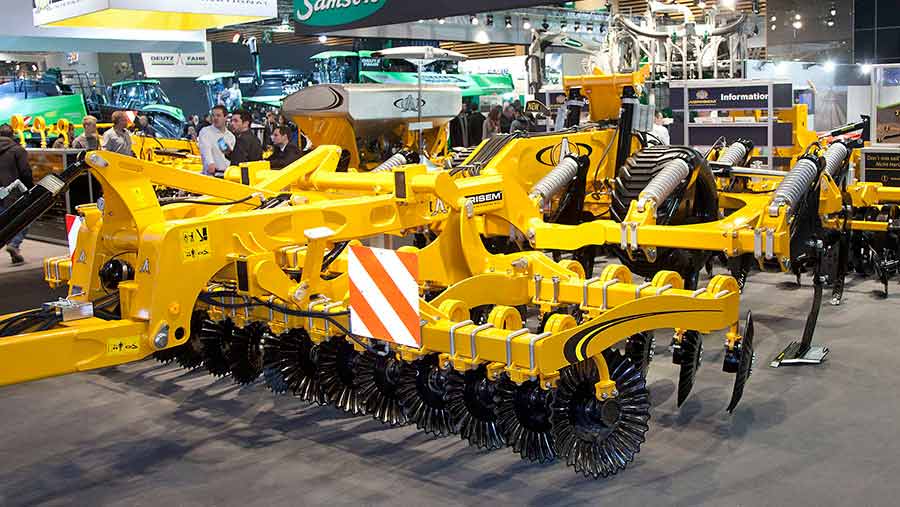 For those on particularly stubborn ground, Agrisem has launched a hard-core version of its Maximulch cultivator.

The Series 5 machine has two rows of serrated 610mm discs at the front that are mounted on heavy-duty 35mm pigtail legs.

These help the discs bite into sun-baked clay ground and vibrate just enough to help shatter the soil.

Behind these, there is a set of coil-sprung, auto-reset legs that can work as deep as 40cm.

These can be fitted with at lease three different feet, including straight points, traditional double-wingers and Agrisem’s own subsoiling points.

A set of levelling discs then level the surface before its consolidated by the rear packer.

The packer can also be removed easily to leave a weatherproof surface.

As well as the heavy-duty construction, Agrisem says each element is well spaced to give a decent amount of trash clearance.

The Series 5 Maximulch is available on 3m or 4m fixed chassis and a 4m or 5m folding one.