Rugby is an unlikely influence on the choice of a dairy farm’s silage feeding system. But lifestyle issues ranked high among economic and practical considerations when brothers Tim and David Inman decided to change the way they produce milk.

“My 14-year old son is mad about sport, and rugby in particular,” says Tim Inman. “Our previous system took up so much time that it was difficult getting to watch him play at a weekend; the new approach has changed all that.”

Instead, a low-cost, low-labour input approach has been adopted, comprising an ad-lib silage feeding system, home-mixed rations delivered from in-parlour and outdoor feeders and a switch over to less highly-stressed British and New Zealand-bred Friesians for the 250 to 260-cow herd.

“It’s transformed our daily workload,” Mr Inman says. “We now put silage in front of the cows just twice a week, so we’ve more time for other jobs during the week, when our cowman Richard Crossland does the milking, and a lot more spare time at weekends when David and I share the milking duties. 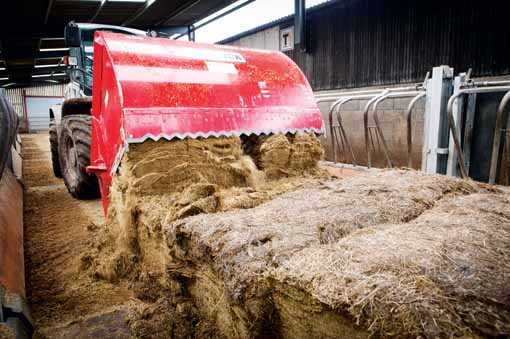 “It’s a lifestyle choice as much as anything,” he adds. “I can get away to watch my son playing rugby and when he sees we’re not just working all the time, like we were before, I think he’s more likely to follow us on to the farm.”

Other factors played their part in the decision to change tack, not least a feeling that the total mixed ration approach was not making best use of grass at Wood Farm, Acklam, near Malton, North Yorkshire.

“The farm can get droughty in summer, so we start drying off the cows in June, reducing the cows being milked to between 60 and 70, ready for block calving in August, September and October, and that reduces pressure on grazing,” Mr Inman explains. “It means we don’t have a very flat production profile, but it works for us.”

The first step in the transformation involved progressively changing from a Holstein herd, averaging around 9000-litres, to mainly New Zealand-bred Friesians. With the change-over 80-90% complete, the herd is now averaging closer to 8000-litres, but with very respectable quality – the current rolling average to the end of January is 4.26% butterfat, 3.4% protein and a cell count of 116.

“With the Holsteins and complete diet feeding we never seemed to stop working, and although the cows yielded well they were not lasting long enough,” says Mr Inman. “The New Zealand-bred Friesians, which have a fair bit of Holstein blood in them, are smaller animals bred for a grass-based diet.”

Having cut back to once-a-day silage feeding in outdoor troughs to reduce the workload, the Inmans felt they could go a further step with a self-feeding arrangement. Having been unimpressed seeing nervous cows feeding at the clamp face over a barrier or electric wire, they came across another solution – the quaintly-named Cow Pow barrier produced by Irish manufacturer O’Donovan Engineeering.

Enough silage for three or four days can be put in front of the cows, who simply ease the barrier forward on its support wheels and guide linkage as they reach for more forage – using “cow power” in other words.

This ad lib approach enables cows to adopt a more relaxed grazing-like routine, says Deidre O’Donovan. And because less feeding frontage is needed, new or existing buildings can accommodate up to 25% more cubicles.

Mr Inman emphasises that good clamp cutting practice is essential to ensure cows are given forage that remains fresh for several days.

“It’s important to give the cows only qood-quality silage, which last year we made with an inocculant additive, and keep it in clean-cut blocks, not tipped loosely on to the feed passage floor,” he says. “That way, the forage stays fresh and palatable for up to four days, with little or no wastage.”

Establishing how much forage to put down was a matter of trial and error that resulted in the farm’s existing block-shearing fork being replaced because it could only put down enough blocks for three days. The wider, bigger volume Redrock push-off Blockcutter that replaced it can place four days’ feed in the same number of blocks.

“We’ve room for 35 blocks between the two sets of barriers, so we take a good deep cut for four days’ feed on a Monday and reduce the depth of the block to take enough for three days on a Friday,” Mr Inman explains. “We always like to see a bit left after each period, so we know they’ve had plenty in front of them.”

Remnants are cleared away and given to the heifers and dry cows, so there is no wastage. And with plenty of room for the farm’s wheeled loader to manoeuvre once the barriers have been pushed back, it’s an easy process.

A quick clean-up of the concrete where the cows have stood and the passage is ready to receive a fresh batch of silage blocks. The whole process – performed just twice a week – takes only a couple of hours.

Nor is there much competition for the 96 feeding spaces, because the ad lib system allows the cows to feed more or less at their leisure.

“They feed after coming out of the parlour and then lie down chewing the cud very contentedly, before heading back for more later on,” says Mr Inman. “And there’s no waste, unlike the trough arrangement we had before, which used to lose a lot of silage as the cows shook it out.”

The change of feeding arrangements cost around €20,000 (£17,200) for the 12 dozen 4.8m (15ft 9in) Cow Pow barriers, which Tim and David Inman installed themselves, and another £27,000 for a Wareing steel-framed timber shed to cover the area, which previously held open troughs.

“But we’re saving fuel by not having a 140hp tractor running a diet feeder 90 minutes every day, and if you cost in our labour there’s a big saving there, too,” says Mr Inman. “Production is down about 200 litres since we stopped feeding brewers grains when the troughs went; but on balance I think we’ll be making about the same margin for a lot less work.”

All will be revealed when the first end-of-year accounts since the new system was installed last autumn become available. In the meantime, Tim and David Inman are content they have done the right thing when they look at how their workload has eased, especially at weekends.

“Casual labour is very hard to find, so you can end up working all hours to keep the job going with a high-input system,” says Mr Inman. “We’re highly delighted with the feeding system in particular and with what we’ve done in general.” 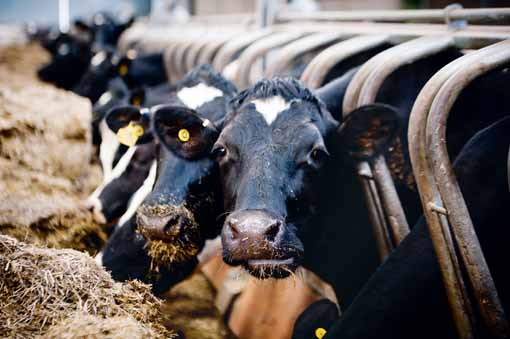