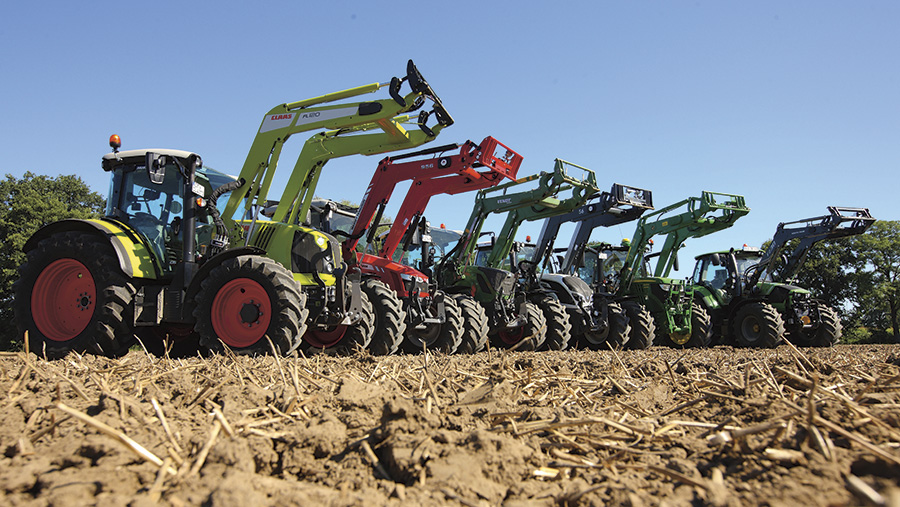 All eyes are on the 120hp tractor division in this year’s multi-test.

Machines in this sector have always sold in huge volumes, but demand is growing particularly swiftly for those that can cram their modest frames with all the creature comforts expected of tractors several rungs up the horsepower ladder.

Cruise controls, steering systems and a minefield of spool settings will be enough to bring old-school farmers out in a cold sweat, but for those who use a single machine for drilling, haulage and loader work, there are also big benefits to be had.

Of course, nothing comes for free and the extra tech pumps top-whack prices almost beyond the realms of many family farmers.

Click on the links below to see each detailed tractor test.

All six, lavishly specced test candidates came in well over £100,000 with the loader included, though strip the tractors back to their bare bones and, in the case of the John Deere, it’s possible to lop up to £60,000 off the final bill.

So, what do you get for your money?

Each machine came with a 40kph box, though the manufacturers were at liberty to spec whichever transmission they deemed most suitable. Fendt, Deere and Deutz settled for stepless set-ups while the others went down the powershift route, albeit with auto-shifting options.

There was no limit to interior spec, either. To our surprise, every tractor except the Fendt turned up GPS-ready and fitted with all the gubbins – including the valves and harnesses – required for assisted steering.

Standard tyres were a test stipulation, but loader spec wasn’t. Though we didn’t directly assess the performance of the lifting equipment, it provided a good chance to judge the usefulness of the joystick and all-round visibility for loader work.

It is also worth noting that all but the Deutz met the latest Tier 4f emissions limits – hence the likes of Case, New Holland and McCormick missed out. The Deutz’s stats were excluded from the averages and we didn’t rank it against the rest, either.

To make sure we gave each tractor a thorough assessment, our test was split into two parts.

Part one assessed the machines from a driver’s point of view with a week-long grilling at our test farm in western Germany, where we had the help of colleagues at partner magazines Top Agrar, La France Agricole and Boerderij.

Tasks, which mimicked typical on-farm duties for a 120hp tractor, included ploughing with a four-furrow Rabe Albatross, primary cultivations with a Lemken Rubin, pto work with a Lely power-harrow and haulage with an 18t trailer.

The next part involved sending the tractors to the DLG test centre in Umstadt, Germany. Here they were hooked up to various scientific instruments to see how accurate the manufacturers’ claimed performance figures were.

Tests included engine power measured at the pto shaft and consumption of both diesel and AdBlue, along with linkage lift capacity and hydraulic flow and pressure.

See the tractor specs below or download the PDF