With unrelenting wet and snowy weather halting many spring drilling campaigns across the country over the past few weeks, many growers that have eventually got a chance to get some seed in the ground have found standard combination or trailed drills are not the best option.

Drills used for autumn sowing with a row of two of discs to level the seed bed and heavy-set packer on the rear often bung up in wet soils, while power harrow combination drills can end up creating a pudding-like substance not conducive to decent cereals establishment.

The alternative, then, could be reverting to the simple but ever-faithful mounted tine drill, which offers a light footprint, low running costs and the freedom to drill into wetter ground thanks to only a few rows of tines making contact with the soil.

A key selling point with these drills is the lower draft requirements and smaller-powered tractor needed to pull them, helped by mounting the seed hopper closer to the tractor and the lack of any rear packer or wheels.

Some farms may have one of these hidden away in the back of an old shed that was retired when the large disc drill came into fashion. But if this has seen better days, there are still a healthy number of manufacturers making them and, in springs such as these, they’re in serious demand.

With that in mind, we’ve picked out a few options on the market. For the purpose of this roundup, we are solely looking at 6m mounted tine drills, with no form of front disc, leg or cultivator. 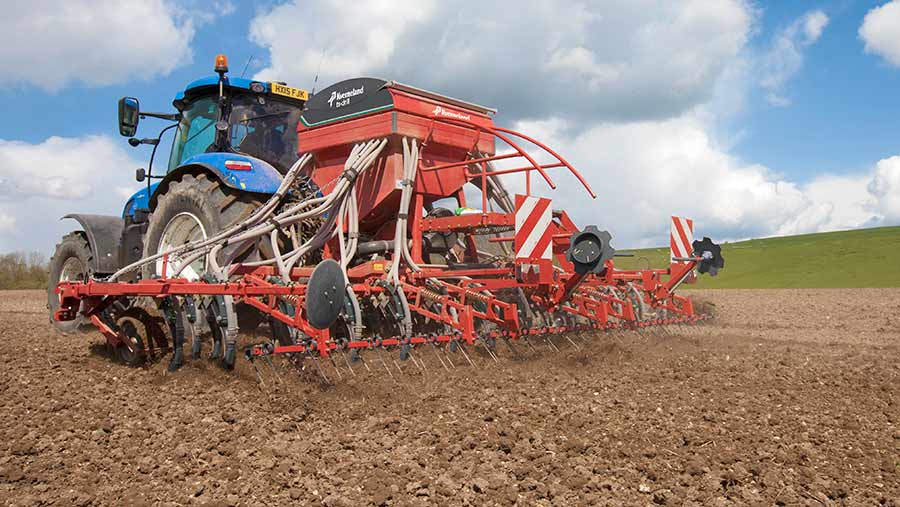 Probably the most common mounted tine drill out there, it has a five-row steel tine setup at either 12.5 or 15cm spacings, which should let wet soils and trash pass through easily. Leaf-spring auto-reset protection is standard across the range.

The 6m model weighs just 1,980kg and has a 1,350-litre hopper with optional side extensions to take it up to 1,700 litres. The hydraulically driven fan blows an air stream into the electric Eldos metering system, which can place seeds at rates as low as 1kg/per ha up to 400kg/per ha.

Land wheels run in front of the tines to keep a constant depth and a standard following harrow offers two rows of tines that can be upgraded to finger tines for stoney soils or a following harrow with press wheels.

Available with a range of KV Isomatch options, including different terminals and cameras, the retail price for a 6m, 48-row machine with Isobus is £38,639. 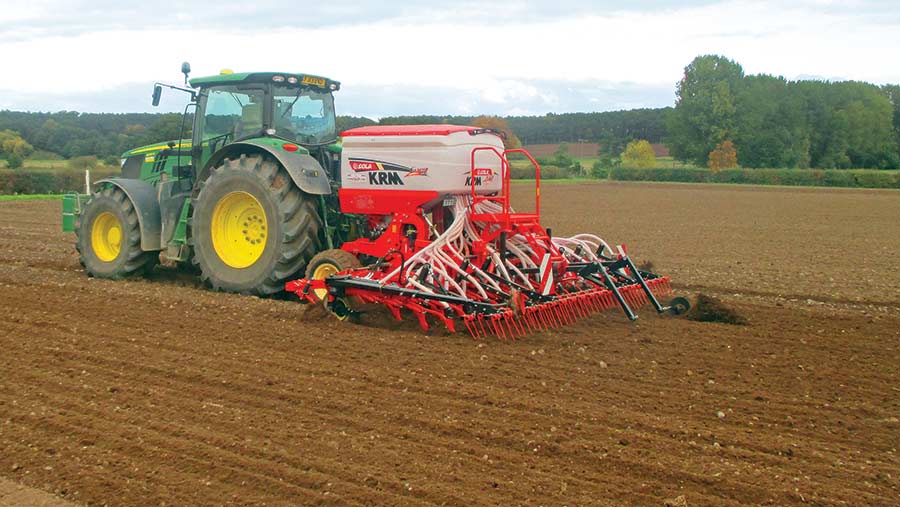 Behind each 12.5cm-spaced tine is a heavy-duty spring positioned at a shallow angle to soak up excess movement and keep downward pressure constant.

Metering is driven by one of the flotation wheels under the hopper, which also has a headland brake to prevent over seeding when the drill has been lifted out of work.

Tine depth is set by adjusting two central ratchets under the hopper and the parallel linkage helps to get the same depth across the width with the help of two depth wheels – one on each front corner. Work and road lights, two-row harrow and a tramlining function are all standard specification items.

The drill comes with a hydraulic-driven fan offering seed rates from 2-400kg/per ha, with a larger-than-most 2,000-litre hopper. 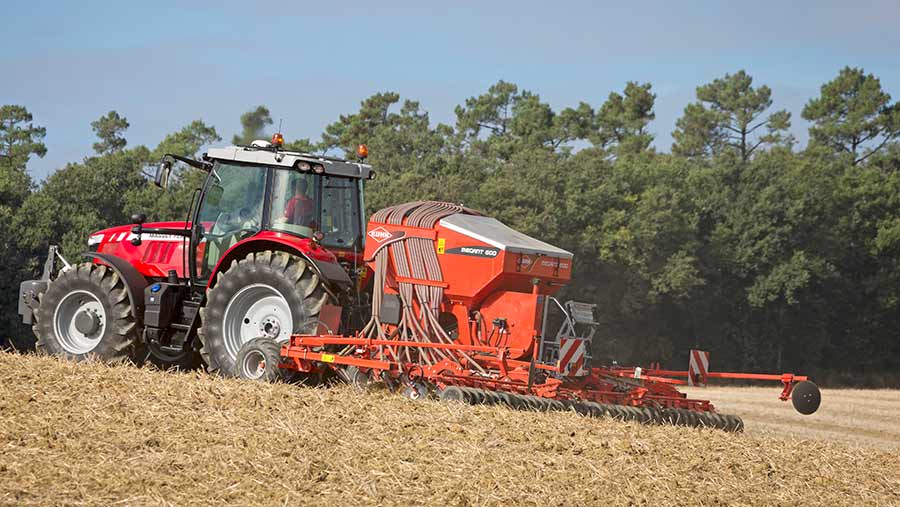 The 600 is the largest of four models in the Megant range from Kuhn, with the smallest being 4.8m wide and all offering 1,800-litre hoppers.

The 600 gets 40 individual rows at 15cm spacing and a simple curved tine setup that should be suitable for most soils, while a straight tine option is available for stony conditions.

Four polyurethane blocks are nestled between each leg on the beam to help give 15cm of vertical movement in case an obstacle gets in the way.

Running a hydraulic-powered fan that uses an independent circuit, the distribution heads and pipes all run outside the hopper to help cleaning, while sowing depth is adjusted via the depth wheels.

In the cab, there is a Quantron S-2 box, which displays all the standard functions along with 14 factory settings for various seed varieties. 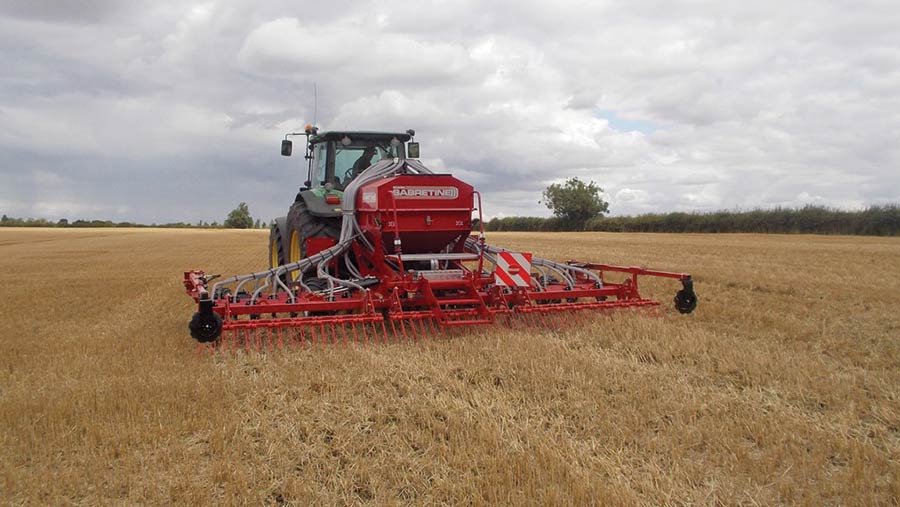 Weaving is mainly focused on the low disturbance and zero-till grower, but there are benefits for others in moving minimal soil in wet conditions.

The Sabre tine is available in 6m and 8m widths and sowing depth can be as low as 10cm, with rubber mounted tines using tungsten tips to prolong life. These are mounted in a three-row staggered formation to avoid blockages and the fan is powered hydraulically with a double pneumatic metering unit controlling seed rates.

The steel 1,800kg hopper has two lids and external pipework for better cleaning, with the entry-level kit including hydraulic depth control, helped by depth wheels on the outer wings.

A generous spec of lights, a double row of following harrows and wheel eradicators are all included on the 6m model for £38,600. 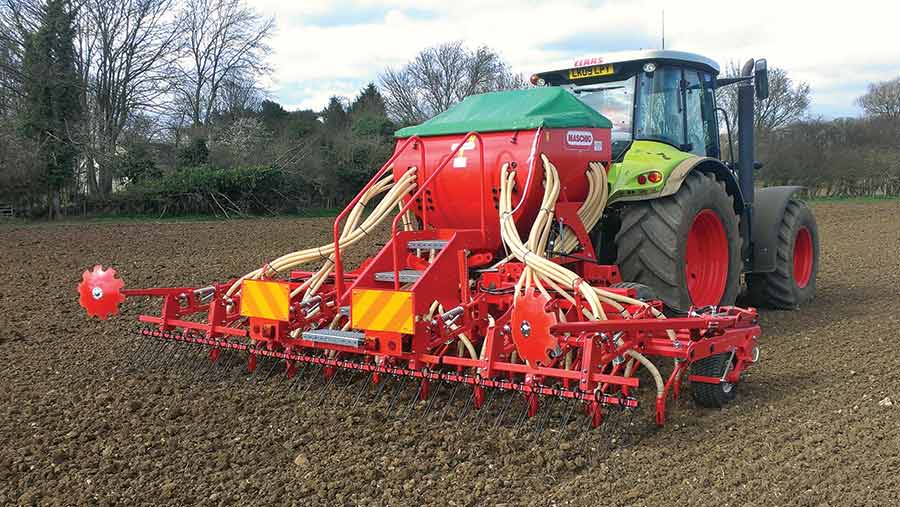 Imported to the UK by Opico, the Maschio Primavera range has four offerings, with the largest being the 6m model.

It is available in 40- or 48-row options, which offer 15 and 12.5cm spacings respectively, and there are dual following harrows with an adjustable angle.

The drill has a hydraulically driven fan and land wheel seed metering system, although there is a fully electric option on request.

While the hopper is similar to the rest in having a 1,700-litre capacity, Maschio says it sits closer to the tractor so will need less power and reduce the wear on the rear linkage. That said, it recommends 175-250hp to lift the 2,100kg machine.

The Primavera comes with three metering rollers as standard, each having different benefits for small or large seeds. It uses a straight-tipped tine coulter as standard, which the firm says is a low-cost part to replace. 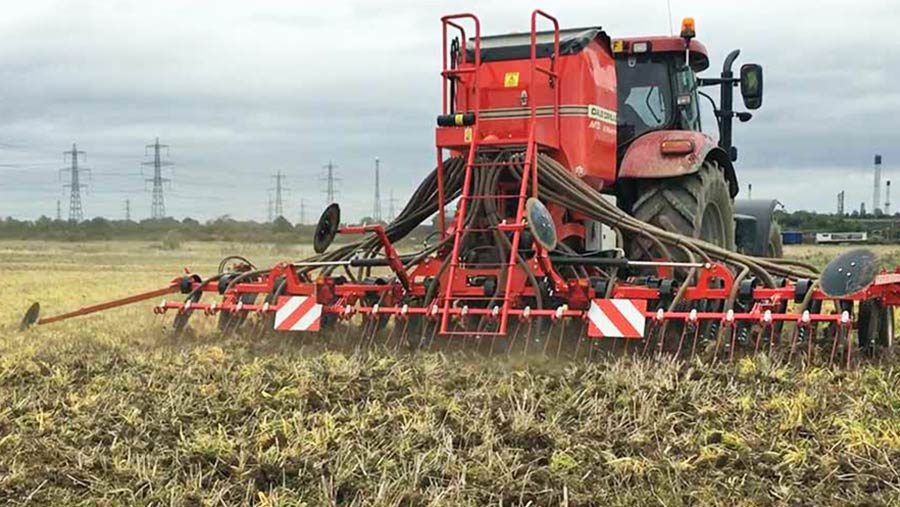 Alongside its more popular direct drill offering, Dale makes a mounted tine drill which is available in five widths from 3m up to the monster 8m unit.

All drills have row spacing of 12.5cm and a slightly smaller 1,200kg steel hopper, while the 6m unit only takes about 140hp to pull it around.

The spring tines are made from boron steel with tungsten tips, with the firm claiming this drill can be used in both direct and conventional drilling situations.

Standard spec on the MTD is pretty good with two Accord metering units working through an RDS Artemis control system, which can link into the tractor’s GPS for variable rate drilling. It carries a single row of following tines, bout markers and a tramlining setup.

Depth is controlled by four wheels across the machine and there’s the option to have a levelling bar in front of the seeding tines.