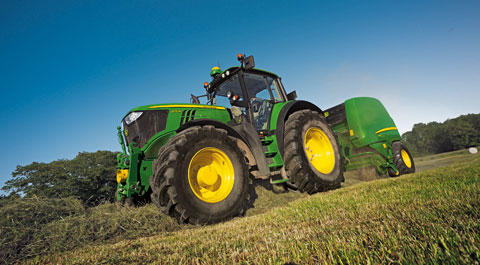 It’s a fact of life that, somewhere in our genetic make-up, we have a yearning to build machines that go faster, lift heavier loads, pull longer ploughs, dig deeper holes and so on. The challenges are endless.

And so it is for round baler manufacturers, which strive to build machines that can make more bales, more quickly and more reliably than their competitors’ offerings. Success brings publicity – and publicity, it can be assumed, helps to sell balers.

Currently it is John Deere and Krone that are vying for the world record when it comes to the number of bales produced in an hour. Last year John Deere announced that one of its new 900-series round balers – the 960 – had romped through a field of straw at a rate of 127 bales/hour, setting, in the process, a new world record.

Not to be outdone, Krone recently proclaimed it had managed an even faster baling rate with its Comprima F125 XC. Working in straw in last year’s harvest, this baler made 1.25m diameter bales, at a rate of 149/ hour, trumping the Deere.

Just how much importance farmers and contractors put on these results is open to question – there is the question of bale size and density to be considered as well. But the really interesting point is to look at is how each manufacturer has designed its baler with output in mind. 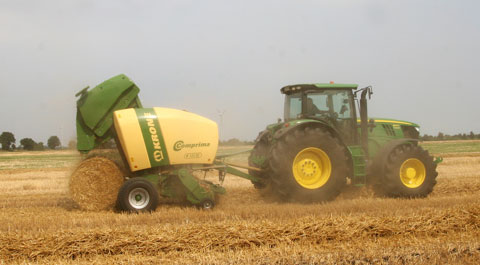 Krone has made a big thing about its 149bales/hour achievement with the fixed chamber Comprima F125 XC. That’s a bale every 24 seconds which, if the bale takes 15 seconds to make, means the bale is net-wrapped and ejected in about 10 seconds. Heady stuff…

So what secrets does this world record holder have that allows it to outpace Deere’s fastest-ever baler by 22 bales/hour?

The first detail is that the F125 XC has a pick-up that does not use a cam track but has five tine bars, which simply rotate at a high speed. Krone claims the design of the guides ensures there is no “dead-spot” before the crop reaches the feed rotor, which is available in three builds: no knives, 17 knives or 26 knives. The centralising augers are separate units and are placed immediately in front of the feed rotor.

Within the chamber is one powered start roller and Krone’s innovative NovaGrip belt and slat system. This uses endless rubber/fabric belts, rather than chains, to pull the slats round and form the bale.

Bale density increases as more of the crop enters the chamber – the elevator belts progressively take a more cylindrical route as the volume of crop lifts them away from the guide rollers.

The degree of tension on the belts determines bale density.

When the bale is completed, the net-wrap system is activated and placed around the bale – for the record, bales are given three layers of net before being ejected. Once again, it is the speed of the rear door that saves valuable seconds in the bale-making cycle. 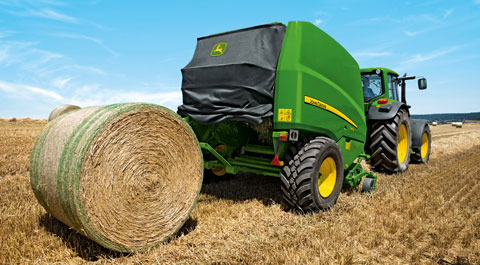 John Deere has clearly spent a serious amount of time fine-tuning its 960 round baler. Like a honed racing car, there are features which, on their own, would make very little difference but collectively save valuable seconds on each bale made.

At the pick-up with its new five-bar tine feed (it was four), the pick-up guide bands are now made from stainless steel to ease the crop into the baler with the least resistance. The use of a cam on the pick-up tines is claimed to put the crop closer to the intake rotor than a cam-free design.

The rotor feed comes in three builds, all of which are described as being high-capacity, and has crop-centralising auger flights. One is bare of knives and recommended for straw and hay and the other two have 13 knives and up to 25 knives for use in silage.

Accepting that at some time a baler is going to be blocked at its intake with too much crop, John Deere has made clearance a speedy affair simply by lowering the floor to reduce the pressure and allow the crop to enter the chamber.

More time is saved by priming the net-wrap feed system when a bale is nearing completion to place the edge of the net close to the intake roller.

A bale is started by two powered rollers, with the density at this stage imposed by springs; as the bale size increases hydraulic pressure from two rams is brought to bear. The use of two wide endless rubber belts to make the bale is claimed to reduce crop loss and quickly produce an even-shape bale in all crop types.

With the bale at the required diameter – the 900 balers are variable chamber – and the net-wrap applied, the bale is ejected. To ensure no time is lost pushing the bale out, the chamber sides (which are held rigid when a bale is being made) are allowed to pivot outwards by 10cm to ease the passage of the bale. Extra speed is achieved through the use of a stainless steel slide.

The ejection of the bale takes just three seconds – the time it takes for the canvas hood-like rear door to open and lower.

As if all this fine tuning was not enough, John Deere says it plans to make available an automated tractor stop-start system, which will automatically follow through the net-wrap and bale ejection cycle – a saving of yet more valuable seconds and, possibly, the making of a new world record…

Getting the best from a Krone Comprima V 150 XC

Getting the best from a Claas Quadrant 2200

Out of the farm workshop: round bale accumulator