Operating a mixer bowser system to support a 30m, 4000-litre Rogator with Chafer spray pack has taken the time pressure off spraying 4500 acres of combinable crops on a Nottinghamshire farm by minimising downtime and maximising output.

The Unimog-mounted mixer bowser unit will supply the Rogator on Tom Hawthorne’s Flawborough-based farm. “We bought our current sprayer to cover 3000 acres,” he says. “But, the farm is now up to 4500 acres, which is more than our machine can cope with. However, with a mixer bowser arrangement we can manage using one machine. This year we have ordered a new 40m, 5000-litre Rogator that will be run on the same basis.”

At the time, the Unimog cost £70,000, plus an additional £7000 for modifications to fit a 3500-litre mixing bowser and 500-litre clean water tank made from an old chafer trailed sprayer.

The clean water tank flushes all the chemical out of the pipes and into the sprayer when emptying, effectively removing the need for a separate cleaning operation, but at the same time making a full tank-mix. 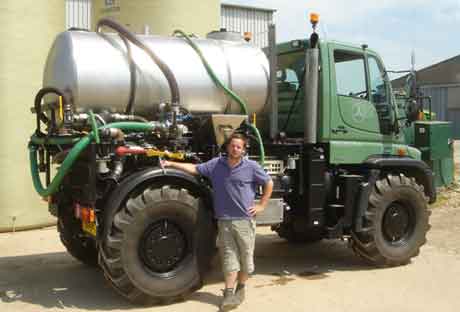 Using a Unimog-mounted mixer browser has increased output by 200 acres/day.

This saves about three-quarters of an hour of downtime, which is how long it takes to make a full tank-mix load. In this time Mr Hawthorne would have been able to spray an extra 60 acres.

“Without a mixer bowser we could achieve 800 acres in about 14 hours,” he says. “Now we can easily achieve the same acreage in 12 hours without putting ourselves under any pressure. It might even be possible to achieve 1000 acres in a day.

“In reality we have actually increased spraying output by about 200 acres a day, the equivalent of two additional full tanks. We grow wheat and oilseed on a 50:50 split so the mixer bowser system is of huge benefit when applying the T1 and T2 sprays, which can involve mixing up to five chemicals together.”

Mr Hawthorne makes the point that using a mixer bowser does mean the spraying becomes a two-man operation, but to achieve the same output the farm would have to run another sprayer and employ another operator and the farm already employs a man who operates the bowser.

“Our sprayer will cover about 55,000 acres per year in less than 1000 hours and this includes all the liquid fertiliser applications too.”