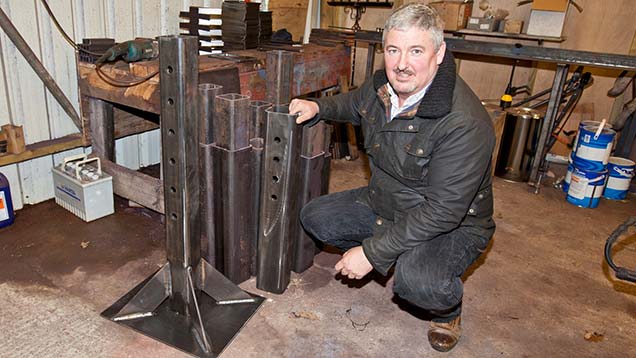 An East Yorkshire sprayer operator’s jack is proving to be something of a success for its inventor.

Shane Cooper got fed up with constantly changing sprayer wheels on the farm where he worked.

And when the farm started doing contract spraying for other farmers, there were yet more tyres to put on and off.

So much so, that he would often have to change the tyres twice a day, every day, for a fortnight.

Every one of these changes involved propping up the sprayer so that the existing wheels could be taken off and the new ones put on.

And using 1m of wooden blocks and a bottle-jack to support the corner of the sprayer while the wheel was taken off is a seriously risky business, however carefully you do the job.

He looked at some of the axle stands on the market but reckoned they weren’t tall enough or stable enough for tall sprayers. So he built his own.

Called the Sprayer Jack, the unit is rated to support 8t, but can actually hold 16t.

More importantly, the jack has 600mm of stroke, so you can raise the sprayer high enough to get even tall row-crop tyres on and off.

In fact, ground clearance can be altered from 550mm to a massive 1.8m.

You can put a pin in at 25mm increments and the whole jack can be tipped back like a sack barrow and easily carted about.

There is a version for trailed sprayers and one for self-propelled sprayers, both costing £425.

Mr Cooper and his wife Sandra make them at their premises near Wansford, near Driffield.

Some 400 Sprayer Jacks have been sold so far and demand is said to be strong.