Agrifac took full advantage of an earlier finishing harvest and dry conditions to host a day demonstrating its full kit list. It wasn’t only its sprayers on display.

After the acquisition of several firms, the Shustoke field played host to a number of working slurry equipment demonstrations. Jos Jones went along to see the kit in action. 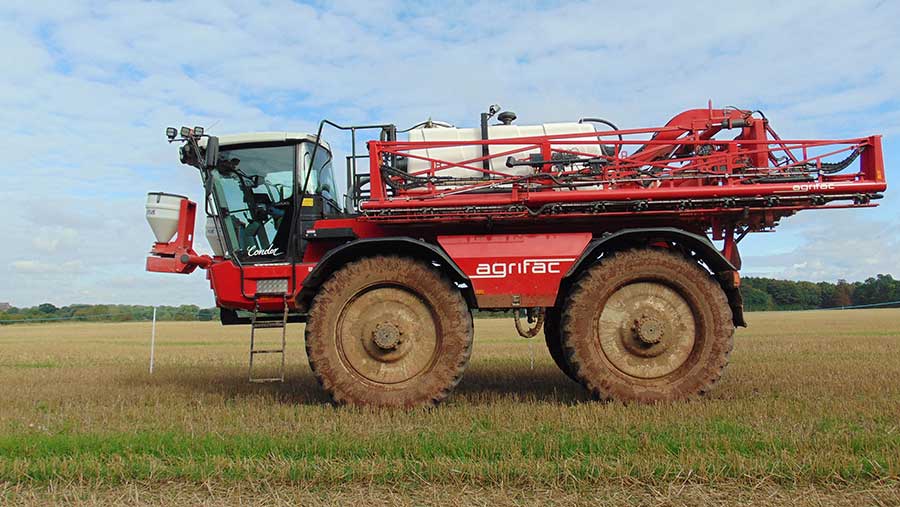 The Condor has been working up and down British fields for a few years, Agrifac was showing off its updated Condor 4 and its range-topping Endurance.

Upgrades are focused on meeting engine emission regs and a few beefed-up sensors here and there, with the Endurance 2 set to follow suit when it’s released.

New models are also available with Agrifac’s Ecotronic Plus App. This allows the user to connect the sprayer to their smartphone using a QR code in the cab.

This can turn sections on and off to check nozzles and flow rate from outside.

Booms continue to be available from 24m to a whopping 51m, although an Australian farmer has recently commissioned a 55m set.

According to Agrifac, 40m is proving the most popular in the UK, for those working with an 8m drill, although there are six 48m versions dotted up and down the country.

These can now benefit from what the company’s calling FastFoldPlus. By using a clever system of rams and sensors to vary the speed when it’s folding, this allows booms up to 48m to fold in and out in 22sec without smashing them to bits.

It’s an option on new machines and as the booms design hasn’t been altered, can be retrofitted to older models.

All Condors are on the same chassis and it’s used the unchanged design for 30 years this year, hence why new buyers tend to opt for the largest tanks available at 5,000 litres.

Endurance tops the sizes at 8,000 litres on a chassis of the same design only a bit longer.

All new machines come auto-steer ready as standard and unlike other brands, they have no preferred supplier so whether it’s Greenstar, Topcon, Ag Leader or any of the other brands, the machine will plug in and play.

An Endurance will set you back around £30,000 more for the equivalent machine. Although these come as an 8,000-litre machine and much more power.

If you’re looking for a bargain though, Agrifac are pushing its “Premium Proven” service, which sees the company take in machines under four years old and 4,000 hours and give them a thorough run through, a freshen up and a year’s warranty. 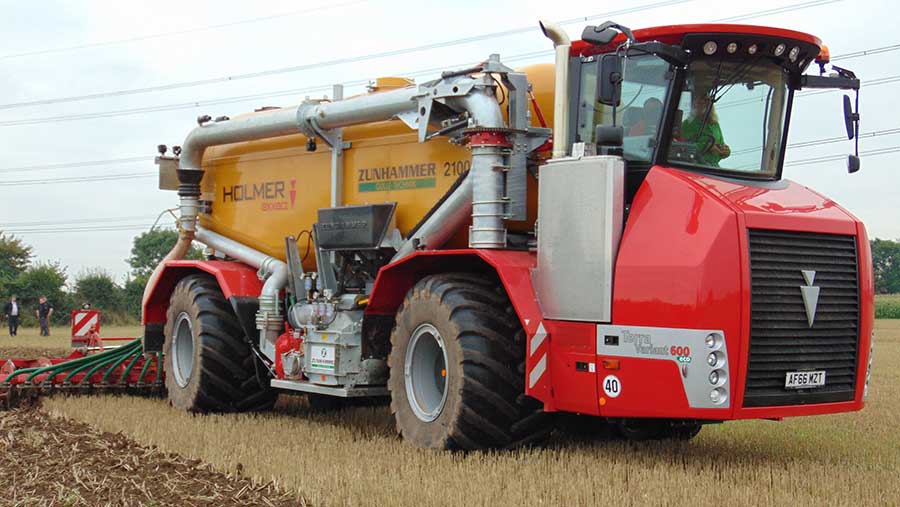 At 598hp and 50t carrying capacity, even though it’s just 3m wide, there’s not a lot the Holmer Terra Variant eco won’t put on its shoulders.

It was seen here as a self-propelled slurry machine thanks to a 21,000-litre Zunhammer tank and 6m Horsch Joker.

The power comes from a 16-litre Mercedes Benz V8 with Tier 3B emissions control, which is tucked under the cab to keep the back half of the machine free.

The massive radiator reverses its fan every 20min to keep it clean and, similar to a lorry, the cab tilts forward for servicing and maintenance.

This is coupled to a 40kph 18×6 Funk power shift transmission, which Holmer says gives maximum power to the wheels.

Four-wheel steer gives it a tight turning circle of 5.5m but crucially, allows the machine to crab down the field, spreading its weight evenly and allowing the rear wheels to tread their own path on light-footed 1050 tyres as standard.

The cat IV linkage pivots to match its crabbing angle and keep implements true. Although this does mean it has a minimum working width of 5m because of the extra breadth of the crabbing machine.

Five double acting spools pumping out 190 litres/min from the load sensing unit all come as standard.

The cab is Holmer’s own and is robbed off its beet harvesters. The pressurised cockpit keeps the smells out, while climate control and the seat both heats and cools to make sure you’re kept comfy.

A plethora of electronics adorn the cab and two cameras can be equipped using the standard switchgear. The machine comes Trimble ready, but others can be specified.

A number of options are available to mount on its back, from chaser bins for beet, maize or grain, to muck spreaders and even hoppers for fertiliser and seed. Without any of these, the machine will be around the £300,000 mark, but that does get you a full Wurth toolkit too.

The Zunhammer slurry system is a factor fitted option and slots perfectly on the chassis. The plastic tank is 21cu m and can be hydraulically tipped for maintenance.

Three baffles internally stop what’s inside lurching around, while Vogelsang hardware deals with loading and unloading.

A 5.7m suction pipe is hydraulically rotated to 170deg to fill itself from waiting tankers and the whole flow has been designed to minimise the amount of corners to flow around.

The pump can deliver 9,000 litres/min through a 250mm suction pipe, allowing the tank to be taken to the brim in just over two minutes.

The rotary cutter can put through 12,000 litres/min and everything is ejected through 150mm pressure pipes.

The company says, coupled with the Holmer and a 6m Horsch Joker, it uses hardly any fuel. Recent tests showed it was using 1.2 litres/cu m when cultivating and as little as 0.3 litres/cu m when on a dribble bar.

The outfit without a cultivator is priced at £385,000 and two have been sold in the last month.

The company says these and the other six in the UK are mainly on AD plants spreading their own digestate, and contractors needing a high output.

The sharp rise in AD plant numbers in Germany make these a popular machine over there, with one operator putting 280,000cu m through his machine every year. 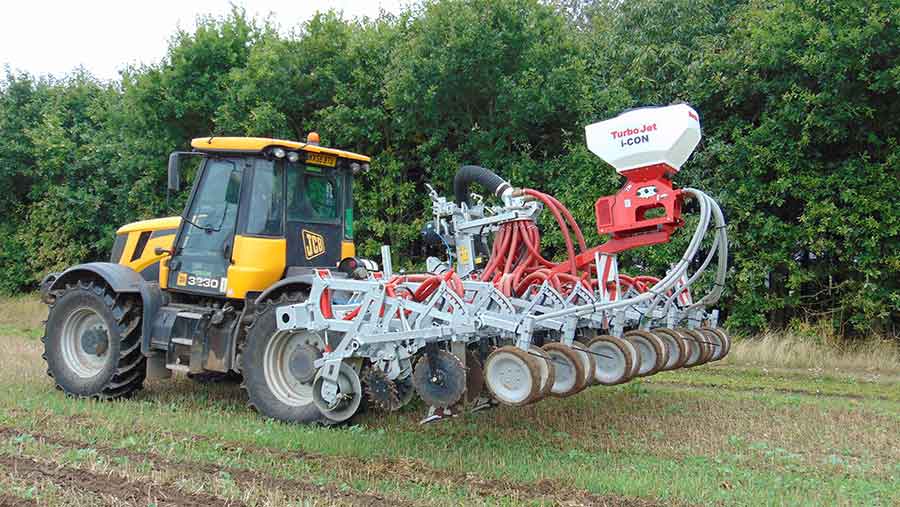 Vogelsang were at the demo with two mounted implements for those with a bit more of a sensible price range.

The new Compact dribble bar range is made to fold a lot tighter than before. The 18m version they had on display could easily fold below 3m and, unlike a lot of its rivals, can have a pulling arm mounted for umbilical operations.

It is fitted with the company’s Comfort Flow Control, which uses air to blow up a bellow inside individually controlled hoses, stopping the flow of liquid on demand. An 18m version like the one on display will set you back around £50,000.

Its updated X-till Vario is aimed at strip tillage and, like the Compact dribble bar, can be folded under 3m. The 6m is the most popular, but the company do make a 4.5m.

The system now has two-stage pipes for injecting slurry to give the plant two hits of nitrogen through its growth stages and height is pneumatically controlled or changed without tools.

Row spacing can be from 75-40cm and more units can be added to take it up to twelve rows instead of eight.

This year, the company have added a Stocks spreader on the back and have been planting OSR at 2-2.5kg/ha and injecting two different levels of digestate at 15-20cu m/ha in the same pass with good results.

They see this machine becoming a possible drill in the future.